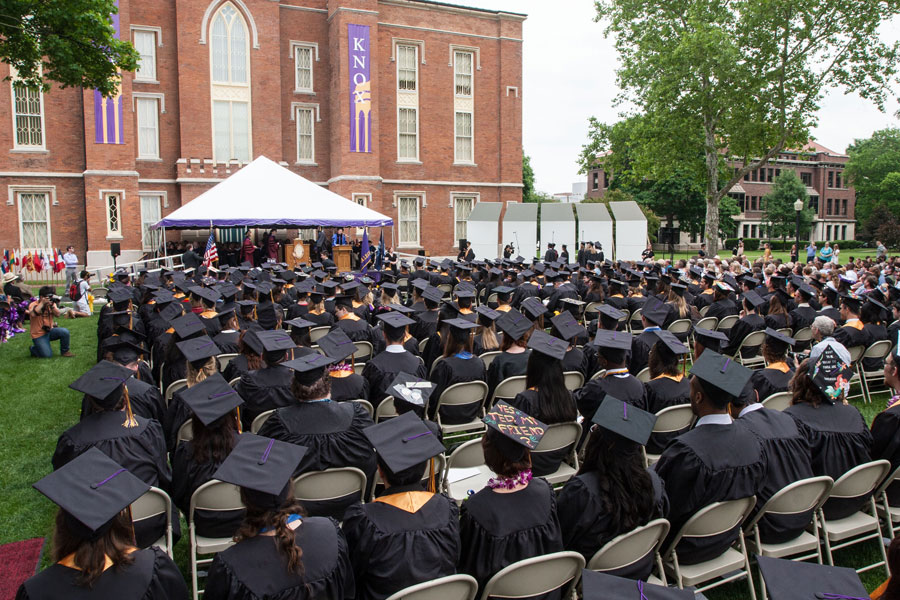 Trethewey wished the graduating seniors "a smooth and lucky passage." She described her own undergraduate liberal arts education, saying it provided her with opportunities to explore different academic subjects and gave her the tools to think critically.

"I was not studying to become a writer, but everything I studied has helped me become one, to answer my calling," said Trethewey, who has won a Pulitzer Prize for her work.

As the graduates' names were read during the distribution of diplomas, there was a moment of silence -- and then several moments of cheering -- in tribute to Tundun Lawani, a student who was killed in 2012 and who would have been graduating with the rest of the Class of 2014.

In her remarks to the graduating seniors, Garduño said that the loss of their friend and classmate showed "that Knox students are resilient" and won't let adversity stand in their way.

"After today, we're finally going to embrace the true meaning of 'freedom to flourish,'" she said.

President Amott congratulated Knox's newest alumni. "You have changed Knox by your commitment to sustainability, and you have changed Knox with your reminder that the promise of access is not yet fulfilled, that we have work to do to build a culture of respect on this campus," she said.

"You are the shape of things to come," she added, citing the work of Galesburg native and poet Carl Sandburg. "Go now with our blessings into the future."

During the Commencement exercises, Jeremy Edison and Christopher Poore were announced as co-winners of the John C. Weigel Prize, which is awarded to the member of the graduating class with the highest scholastic achievement. In addition, Marcus McGee was announced as winner of the E. Inman Fox Prize, which is awarded to a senior whose scholarly achievement and pursuit of a truly liberal education are exceptional among peers.

Many of the graduates wore green ribbons, signifying that they have signed the Graduation Pledge of Social and Environmental Responsibility. The pledge states they will "explore and take into account the social and environmental consequences of any job I consider and will try to improve these aspects of any organizations for which I work."

Photo coverage of Commencement. Full-screen and captions available in a set at the Knox College Flickr channel.