Degrees awarded to more than 300 on Saturday, June 2 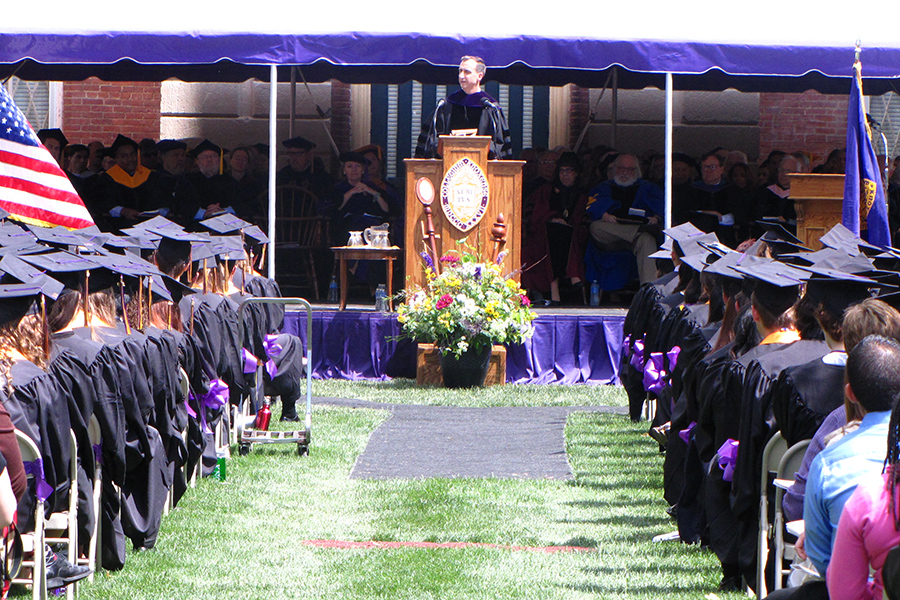 The Commencement speaker, Brigadier General Mark Martins, urged graduates to make a habit of "looking for contrasting worlds and seeking to bridge them -- and in this way pursuing a life of service." General Martins, chief prosecutor of the war crimes trial system reformed by the Military Commissions Act of 2009, is a noted proponent of transparency and legitimacy in legal proceedings involving detainees at Guantanamo Bay.

"Most of bridge building is not instantly gratifying. Nor is it for the fickle or the faint of heart," he added. "But for those prepared to take on such challenges, the rewards are great."

Watch videos and view transcripts of the Commencement speeches.

The senior class speaker, Gregory Thomas Noth, called on his classmates to "go do the amazing things Knox alumni do."

"Those that came before us set the bar quite high. It is our job to make sure it remains there. Keep loving life, this school, and each other," he said. "This is a community unlike any other, and it's because of the people that comprise it."

The Caterpillar Faculty Achievement Award was presented to Professor Lance Factor, George Appleton Lawrence Distinguished Service Professor and Chair of Philosophy and co-chair of Religious Studies. "For over 40 years on the Knox faculty, he has been one of the college's premier teachers and scholars," Brett Tilly '95 said as he made the presentation. "The college is a better place because of him."

"We have hope and faith in you."

Members of the Class of 2012 came from 30 states and 17 countries, and hundreds of their family members and friends attended the Commencement exercises.

The crowd included Yvonne LeFlore, her daughter Latosha Bonner, and Bonner's son, Landon, all of whom traveled from Chicago, Illinois, to watch Alexandra LeFlore receive her degree.

"She is my baby," said Yvonne LeFlore, Alexandra's mother. "She's made it through difficult adversities in life. I'm very proud."

Prem Kasaju and his wife, Sudha, took "quite a journey" from their home in Kathmandu, Nepal, to see their daughter, Supriya, graduate.

"We're thrilled and excited," said Sudha Kasaju. "It seems like yesterday we came here" to drop her off when she started at Knox.

"The way she has grown up as an individual, independent with her own thinking, that is very satisfying," Prem Kasaju added. "She has evolved as a person. That is because of her experience here, so we would like to thank Knox."