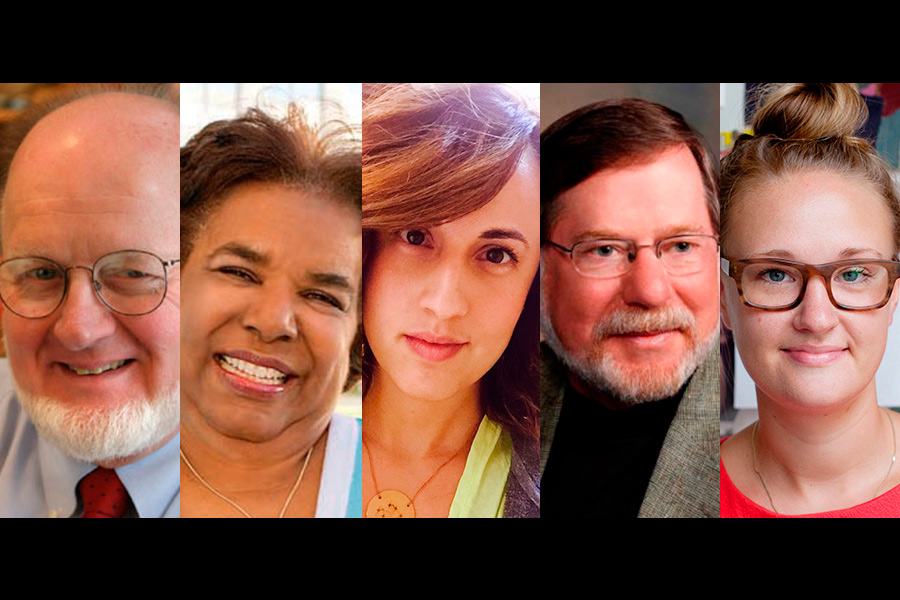 Knox College honors five alumni for their accomplishments with Alumni Achievement Awards at the Founders Day Convocation, 4:30 p.m., Friday, February 19, in the Muelder Reading Room, Seymour Library. The convocation is free and open to the public.

The convocation celebrates the 179th anniversary of Knox's founding in 1837. The College's formal charter was approved by the Illinois Legislature on February 15, 1837. The College and the City of Galesburg were established by a group of anti-slavery pioneers from upstate New York led by the Rev. George Washington Gale, after whom the city was named.

Psychologist Thomas Brown is a clinical psychologist, teacher, researcher, and writer with a special interest in attention deficit hyperactivity disorder. After earning his bachelor's degree in history at Knox in 1964, he earned a Ph.D. in clinical psychology at Yale University. He then joined the psychiatry faculty at the Yale University School of Medicine, where is an assistant clinical professor of psychiatry and associate director of the Yale Clinic for Attention and Related Disorders. Among his publications is the widely acclaimed book Smart but Stuck: Emotions in Teens and Adults with ADHD.

Physician Ernest Buck has won wide recognition for his contributions to the health and welfare of children in Texas. He earned his bachelor's degree in biology at Knox in 1974, then completed his M.D. at Rush University. He practices pediatric medicine in Corpus Christi, Texas and serves medical director of the Driscoll Children's Health Plan, helping expand healthcare options for low-income families in the region. He received the 2014 Charles W. Daeschner, Jr., MD Lifetime Achievement Award from the Texas Pediatric Society in recognition for his work as a physician and as an educator.

Attorney Marcea Bland Lloyd is retired senior vice president of Amylin Pharmaceuticals. A 1968 Knox graduate in sociology and psychology, Lloyd received her law degree at Northwestern University, then practiced law in Chicago, where she represented the African American Patrolmen's League and volunteered for the ACLU Ghetto Project. Her career in corporate law includes work at retailer Montgomery Ward, medical device manufacturer Medtronic and healthcare purchasing company VHA. From 2007 until her retirement in 2013, she was senior vice president and general counsel of Amylin Pharmaceuticals, Inc. Lloyd also is known for her service in mentoring, education, and leadership training for women.

Artist Katie Bell is the 2016 Young Alumni Achievement Award recipient. Bell grew up in Rockford, Illinois, graduating from Knox in 2008 with a major in studio art and earning a master of fine arts degree from the Rhode Island School of Design in 2011. She works in Brooklyn, New York, where she was named one of "8 Great Brooklyn Artists Under 30" by "The L Magazine." Bell has exhibited her work nationwide, including shows this year at Locust Projects in Miami, and Harper College in Palatine, Illinois. She was recently honored with a fellowship from the New York Foundation for the Arts in recognition of her compelling artistic vision.

Film and television producer Rachel Abarbanell is receiving a 2015 Young Alumni Achievement Award this year. She was unable to attend last year's awards ceremony at Knox due to a conflict with the awards season. Abarbanell graduated from Knox in 2002 with a major in economics and a minor in theatre directing. She joined Lynda Obst Productions in 2005 and was named president of production in 2012. Recently she worked on the pilot episode for the highly rated Amazon video series Good Girls Revolt, about the struggle for gender equality at a news magazine in the 1960s. The show was picked up to series and will air later this year.

Knox's “Fifth Year for Free Guarantee" allows students who were enrolled at Knox for the 2020-21 academic yea...