Knox Alumna and Professor Collaborate on Award-Winning Book of Poems 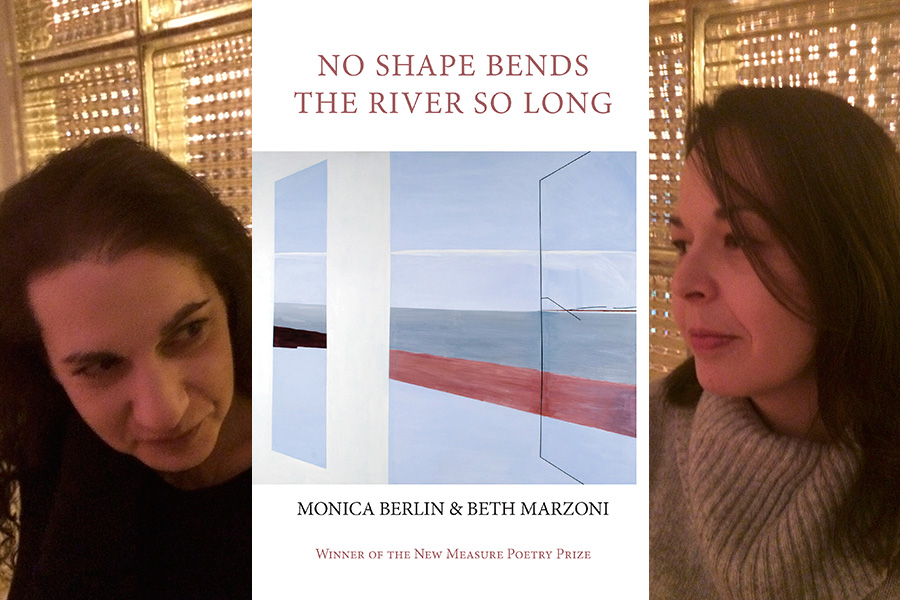 Long before Beth Marzoni '04 and Monica Berlin '95, associate professor of English, wrote a book of poetry together, Marzoni was Berlin's student at Knox. More than a decade ago in Berlin's corner office in Old Main, the two became friends through a shared love of poetry, of art, of the Midwest.

In the spring of 2012, they wrote their first poem together. The collaboration has continued for more than two years, and their poems have appeared or are forthcoming in Colorado Review, New Orleans Review, DIAGRAM, Better: Culture & Lit, Meridian, TYPO, Quarterly West, and Vela.

In January 2015, the two released a collection of their poetry. No Shape Bends the River So Long, published by Parlor Press, was selected for the 2013 New Measure Poetry Prize.

The collection meanders through the American landscape in search of site and relic, home and away-from-home. Part meditation on our tenuous position in the natural world and part interrogation of that relationship, these poems map what any place records and what it has erased.

Below, Berlin and Marzoni talk about their experience of collaborative writing, the inspiration for their poems, and a friendship that began when Marzoni was Berlin's student at Knox.

How did this collaboration begin?

Marzoni: In one version of this answer Monica and I were working in the studio one day and I said, "Hey, let's try this crazy thing..." And we did. And it was fun and strange and challenging, and so we did it again and kept doing it. In another version, almost three years earlier, Monica e-mailed me a poem one day and, maybe seriously or maybe not, typed: "Your turn. You have 24 hours." And I decided to take it seriously, and I wrote her a poem back, and then she wrote me a poem back... In yet another version, more than a decade ago, we were sitting somewhere on campus talking about a poem, and out of that conversation grew a conversation we've been having since.

Can you give an example of the typical process of writing a poem together? How does working together change the way you approach a poem?

Marzoni: Because we are both the authors of every poem in the book-we navigated each word, each line break, each punctuation mark together-none of the poems we've written really originate in either of our individual, emotional lives. Even when one of us supplied that first nudge, the act of composition was all about listening and reacting. I mean, the weather in Wisconsin was only sometimes also the weather in Galesburg, and even then it wasn't. In this way, our process isn't so different from the process of plenty of other poets or the way either of us write alone except that we couldn't get lazy. We worked to surprise each other, to make unexpected moves, and in doing so we pushed each other. We deeply respect each other as artists, and we certainly trust each other as friends. That made it easier to take risks: we trusted each other's technical skill and we believed that together we could solve whatever problems we got our poems into.

You both attended Knox and returned to teach here. Did your Knox experiences influence your collaboration at all?

Berlin: On one hand, Knox has always been the place where I learned to listen and where I learned to look, to see, and that learning didn't stop when I became a faculty member. As a student, the foundation of that particular kind of learning was firmly established, of course, and for that I'll always be grateful. As a faculty member, my interactions with students-the intimate and shared space of the writing classroom and my office-encourages the kind of conversations that Beth and I began more than a decade ago and instilled in both of us a belief in the importance of continuing such conversations beyond the classroom. Because of Knox I am able to make a life with art at the center, and in that center is a profound desire to share that art with others, others who make me a better person and a better writer.

Knox also brought Beth back here to teach-not once, but twice-and in doing so, further enhanced our opportunity to continue talking. Long ago, Beth trusted that Knox was the place where she might be the kind of person she already was and kept wanting to be, and so she arrived here, as student-as I, too, once did-and then, she kept trusting Knox, just as I had and have. In exchange, Knox trusted us, supported us, to make the work matter in the ways it mattered and keeps mattering, trusted that we could recognize what the classroom made possible and when the life of the mind must extend beyond the classroom to our lives and to other possible spaces. Yes, the nature of our friendship over all these years is, on one hand, a credit to Knox, and so the poems are a credit to Knox. On the other hand, it might be truer to say that Knox let us be the people we were, and are, and together as well as separately-in that kind of environment and among that kind of community-we could be the best versions of the people we have always been.