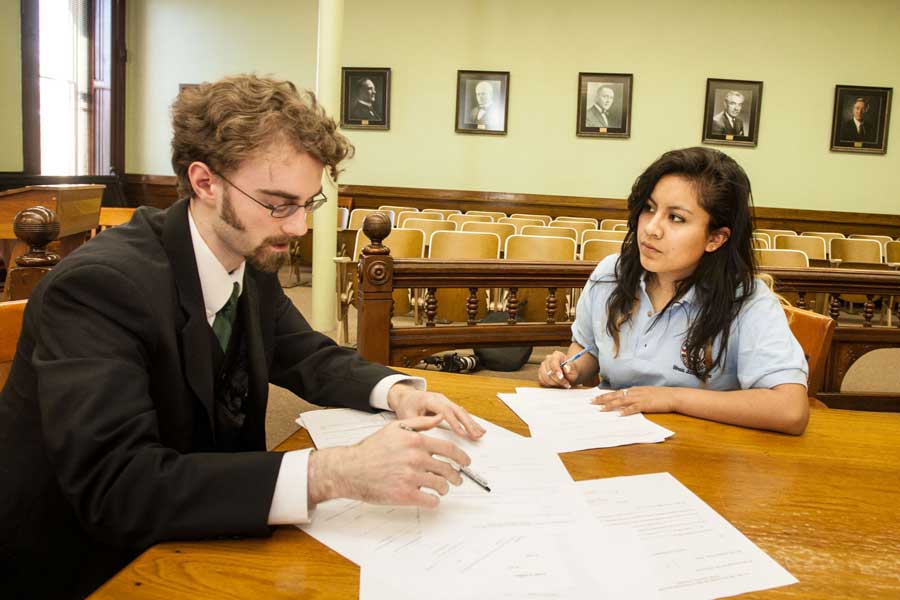 Three Knox College students are getting a taste of the  legal profession through their work with JusticeCorps, a program that allows specially trained volunteers to assist people who are not represented by lawyers.

Knox senior Andrew Whitehill said he wanted to join JusticeCorps because it would enable him to become more familiar with the courts and provide "a way for me to give back" to others.

JusticeCorps "combines something I'm passionate about (pursuing a law career) with my interest in community service," said Whitehill, who is president of Knox's  Pre-Law Club and treasurer of Rotaract, a community service organization. A political science major, he is double-minoring in environmental studies and American studies.

Through his involvement with JusticeCorps, he said, "I've gained a more realistic understanding of how the courts operate, in terms of the people using them. These are people's real lives they're affecting. I'm also gaining a confidence in how I would practice law."

Marisol Gonzalez-Castillo, a senior who plans to attend law school next year, says that participating in JusticeCorps has built on her Knox education.

"It gives me another way of learning," said Gonzalez-Castillo, who is double-majoring in psychology and economics. "Knox has always allowed me and pushed me to look for new ideas and experiences, and JusticeCorps has pushed me outside my comfort zone and has taught me a lot in dealing with legal issues."

The JusticeCorps students perform different types of work, such as helping individuals fill out and file paperwork related to orders of protection, legal name changes, and uncontested divorces.

"We provide assistance and information to people that have legal problems who can't afford, or have decided not to use, attorneys," said Ben Mullison, a 2010 Knox graduate who earned a law degree from the University of Illinois. "We do not provide legal advice."

As JusticeCorps Fellow for Galesburg and Macomb, Mullison supervises the work performed by the three Knox JusticeCorps students: Whitehill, Gonzalez-Castillo, and Nabila Dadar.

The Illinois Bar Foundation administers the Illinois JusticeCorps program, which is in its first year at Knox College. It was originally established as a pilot program in two Illinois counties, Cook and McLean, and recently expanded to other selected parts of Illinois.