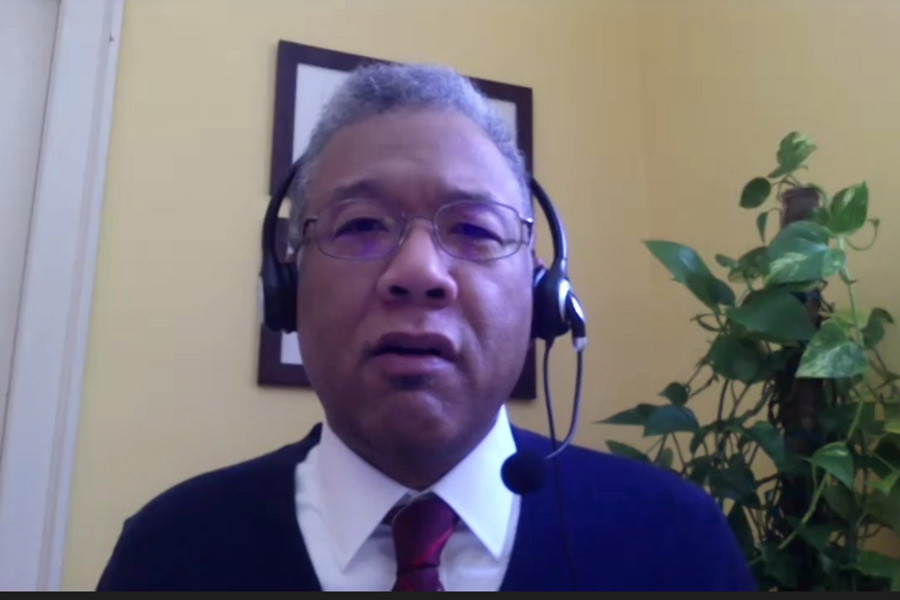 Every few generations, it seems, Americans must rediscover the will to protect and nurture their democracy, Burkhardt Distinguished Chair in History Konrad Hamilton observed at Knox College’s 2021 celebration of the life and legacy of Dr. Martin Luther King Jr.

Now is one of those times.

“Dr. King and his followers were among the millions of Americans—some famous, some obscure—who stepped up to the plate and moved the country forward, rather than letting it slide backward. But history never stands still,” Hamilton continued. “And now we find that it is our turn to step up. On January 6, we saw an insurrection, a violent orchestrated attempt by an armed mob to overturn the result of our presidential election.”

White supremacy has proven to be “our national evil, our American affliction” and “a clear and present danger to the republic,” he added. “It is long past the time when we as Americans must acknowledge this simple fact. White supremacy is not simply a personal opinion or point of view…. White supremacy is akin to a virus, a malignant disease that brings ruin to victim and perpetrator alike.”

We must control that disease, Hamilton said. Otherwise, it will control us.

King sometimes spoke about the struggle between the civil rights movement and White supremacy as “the confrontation of good and evil,” Hamilton explained. “In one of his unguarded moments with his congregation, he gave this simple advice: ‘My friends, there is an evil way open to you, and there is a good way open to you. In the final analysis, you must decide which way your soul will go.’ As a nation, we are at one of those points in history where we must decide which way our country will go. Let us choose wisely.”

Hamilton, who also is chair of Knox’s American Studies program, made the remarks in his keynote address, titled “Where Do We Go from Here? King’s Vision for America.” For years, Knox has held a winter term convocation on the Dr. Martin Luther King Jr. federal holiday. The event typically has taken place in Harbach Theatre and features speeches, music, and poetry, but this year’s King Day Convocation moved online because of the pandemic.

In addition to Hamilton’s keynote address, the 2021 commemoration included brief remarks from other members of the Knox community: President Teresa Amott, Provost and Dean of the College Michael Schneider, and Professor Magali Roy-Fequiere, chair of the program in Africana Studies and chair of the program in Gender and Women’s Studies.

President Amott thanked Professor Roy-Fequiere, who organized the event, and other participants “for bringing us together as a community to renew our commitment to the ideals embodied in the life and works of Dr. Martin Luther King Junior.”

“Every year on this day, I am struck by its multiple and deep contradictions,” President Amott added. “We come together on Dr. King’s birthday to celebrate his life and his accomplishments, but we cannot help but remember his death by violence, especially today when images of violent mobs occupying the nation’s Capitol illustrate how close we are to losing our democracy. We are grateful for his accomplishments, but we mourn the absence of his powerful voice, his strategic insight into social movements, especially now, when we are so deeply divided as a nation.”

Professor Roy-Fequiere also read four poems during the King Day commemoration: “Facing It” by Yusef Komunyakaa, “Imagine the Angels of Bread” by Martin Espada, “Frederick Douglass” by Robert Hayden, and her own work, “Invitation.”

Ten Galesburg eighth-graders are selected for the program, which helps them succeed in high school and offers free college tuition.