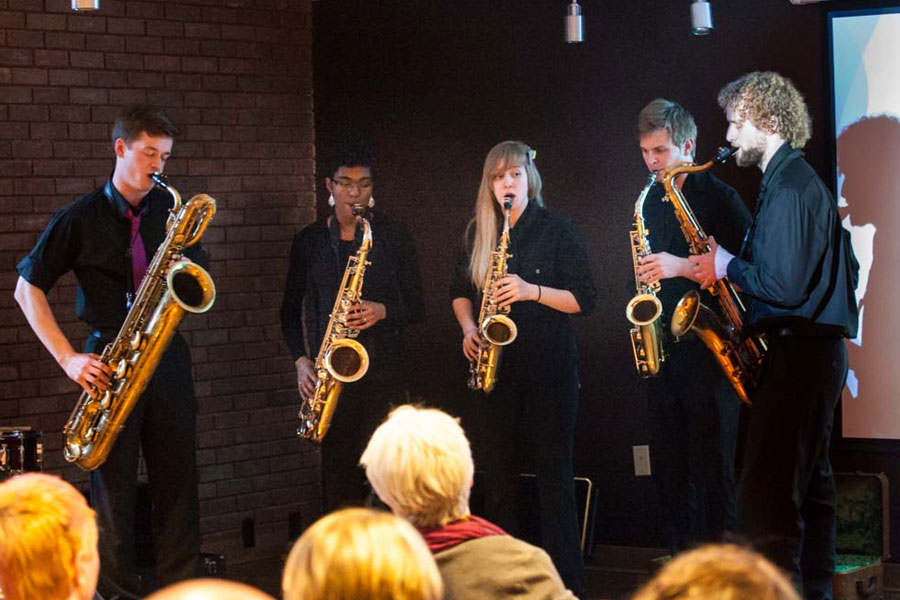 From performance to social action, from music theory to the music business, six senior music students recently gave presentations on their term-length "capstone" independent study projects, required for the music major. The students also gave a look ahead to their future plans after graduating from Knox in June. Below are edited summaries of their presentations on March 7.

Rob Durgin, "The Knox Saxophone Quartet: A One-Step Process of Composition" ~ I created an ensemble of five saxophones, enabling me to experiment with jazz composition and jazz arranging for the first time... I discovered that it didn't have to be a two-step process in which the composer writes in isolation and then an ensemble plays, but a gradual, one-step process in which I was able to workshop my piece with the group as it was being composed and developed... After Knox I plan to apprentice and study instrument repair. My long term goal is to open a music store, repair and sell instruments, and teach lessons.

Stephanie Campbell, "A Music Educator Goes to Prison: Offering Rehabilitation Through Music at Henry Hill Correctional Facility" ~ I was inspired by Send Musicians to Prison, a national organization that arranges for musicians to perform for and with inmates. I researched music programs in prisons and musicians who worked with prisoners, to explore the possibility of rehabilitation through music. I toured a medium-security state prison, and interviewed the assistant warden. As a result of my project, Knox musicians were extended an invitation to perform for inmates... I plan to work in music education and continue with my research by establishing an ongoing volunteer opportunity.

Josh Calef, "‘Let the Punishment Fit the Crime': Context, Analysis, and Influence of Art Blakey's Press Roll" ~ I wanted to take an in-depth, analytical look at one of the most important drummers in history. I focused on Blakey's trademark, the press roll... With Blakey as leader, the roll tended to last longer. When playing with another artist, Blakey's rolls left more space for the other instrumentalists. That's what Blakey meant when he said "let the punishment fit the crime" -- the drummers' performance decisions should change and fit the context of performance... I plan on pursuing a career in both jazz drum performance and education.

Catie Peck, "Being Female in Male Musical Spaces: Strategies of The Bangles vs. Bikini Kill" ~ In order to break into male-dominated spaces in the music business, female groups developed different strategies. As a pop group, The Bangles tried to downplay their gender. They did what they had seen all-male groups do -- "writing the songs, playing the instruments and singing"... By contrast, gender was integral to the punk band Bikini Kill. The group used media, such as zines and Riot Grrrl meetings, to spread emerging third wave feminism. Their emphasis on lyrics, not virtuosic music, encouraged young feminists to start their own bands... I will pursue a career in music therapy and would like to create a community-based arts outreach center for cancer patients and abuse survivors.

Kailee Gawlik, "Creating Monsters: The Use of Silence in Maria Schneider's ‘Dance You Monster to My Soft Song'" ~ I define three types of silence and want to understand how they affect the overall mood. In "Silence as Release," quartal chords create an otherworldly feeling, and moments of silence give the audience pauses to relax... In "Silence as Tension," moments of silence during the trumpet solo leave a lot of open space. This throws the listeners off balance. "Silence as Suspension" is not the absence of sound, but the absence of rhythmic and harmonic motion... I plan to pursue advanced degrees in musicology, to become a professor at a small liberal arts college.

Michelle Orr, "‘In Transit': Composition for Dance, Percussion, Strings, and Voice" ~ I composed in collaboration with choreographer Evelyn Langley, starting when we both took a class trip to Ghana last December. The piece looks at different connections people make while traveling, how strangers interact and inevitably depart. It taps into emotions felt when traveling: longing, joy, adventure, anxiety. We wanted to create an ambiguous environment -- bus station/ train station/ airport/ subway -- that is represented in both music and movement... I'm looking at music internship programs in Germany to combine [my interests in] arts administration and music production. 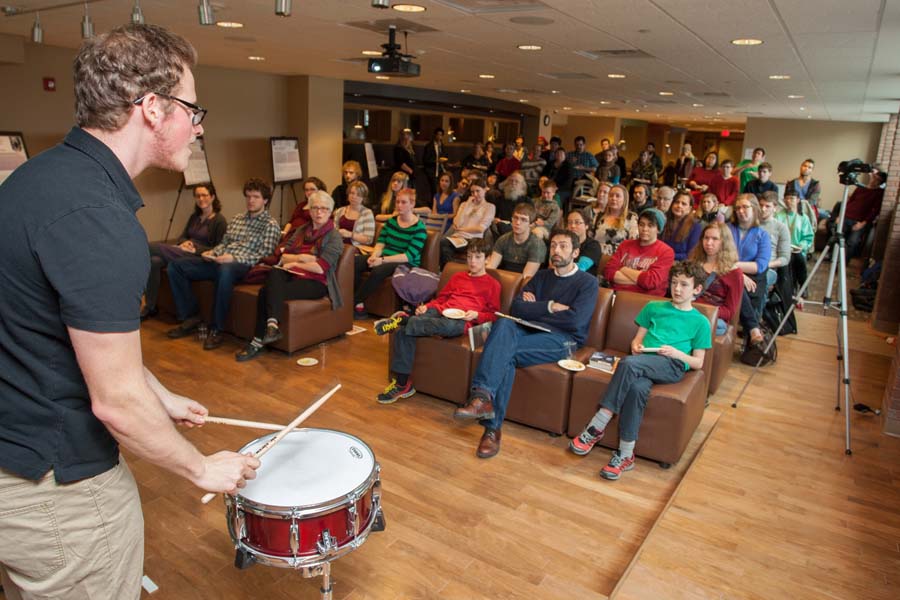 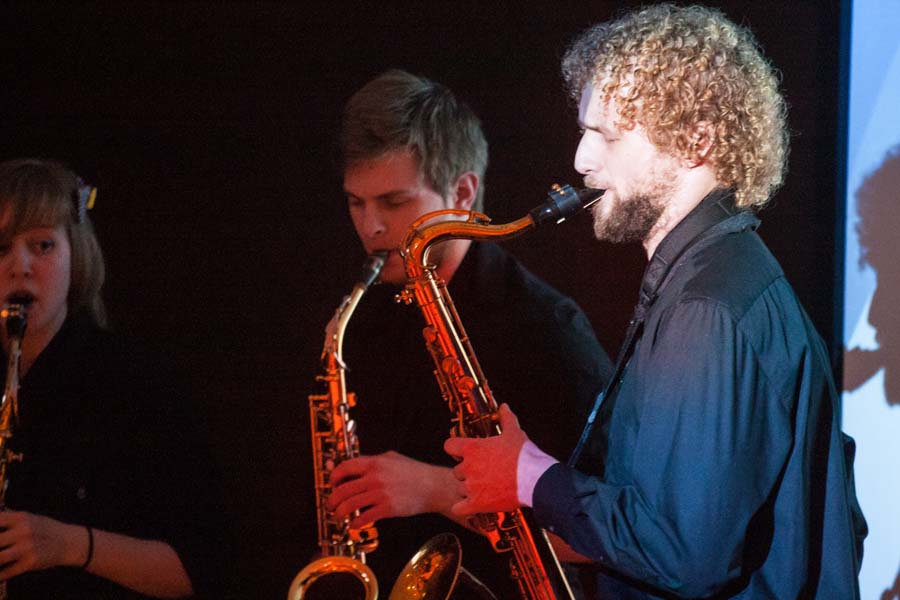 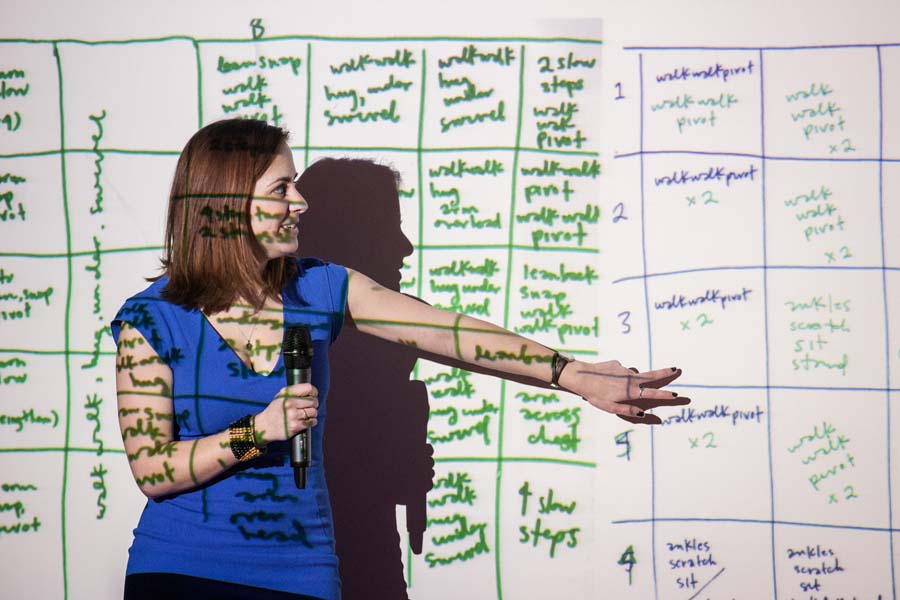 More photos of the music program at Knox at the Knox College Flickr channel.