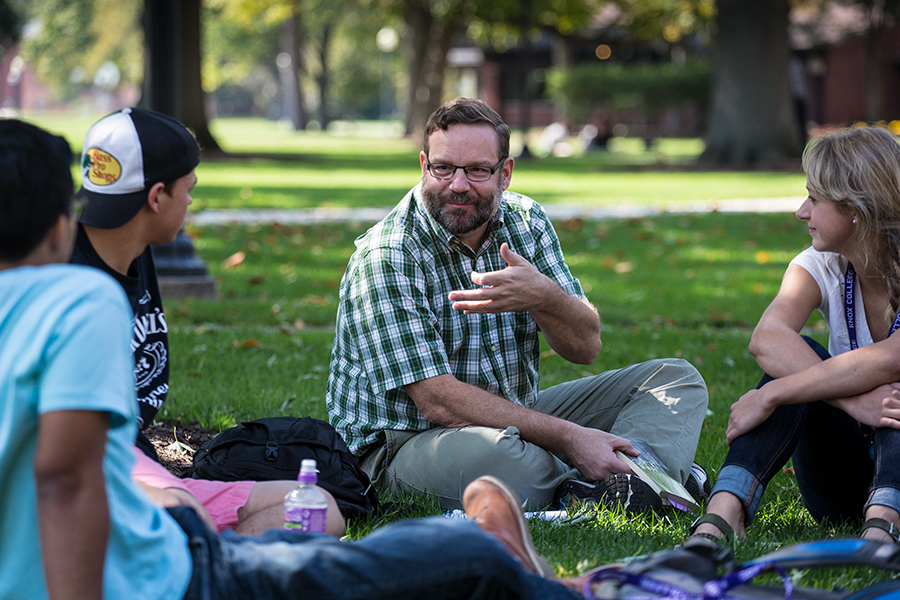 “Jonathan personified the best of Knox in so many ways. His constant devotion to students, his joy in teaching, his unstinting service, and his utter love of the community have been constant themes in his life at Knox. Jonathan was devoted to the people of this community, and his love motivated all of his work toward the betterment of us all. And we are, indeed, better for his love.”
– Elizabeth Carlin Metz, Smith V. Brand Distinguished Professor of Theatre at Knox.

Beloved and respected professor and chair of economics at Knox, Jonathan G. Powers was found dead from natural causes at his home in Galesburg on Wednesday, June 15, 2022.

He was affectionately known as “J-Pow” among his students, colleagues, and alumni, because typing “jpow” into an email would automatically complete into his full Knox email address.

Powers was an esteemed member of the Knox community, serving on a number of faculty committees, including the Executive Committee, the Faculty Advisory Committee on Internships, the Athletic Committee, and the Financial Development & Budget Committee.

“Jonathan was in equal measures deeply insightful into how and why a small college campus works, while simultaneously able to share his insights in respectful, supportive, and often self-deprecating ways,” said Michael Schneider, provost and dean of the College.

"As he did for so many, Jonathan listened with kindness and patience and great generosity,” said Carol Scotton, associate professor of economics and business and management. “He genuinely listened. He paid attention, eager to learn where I, or whoever was talking, was coming from and heading toward so he could meet us where we were. While he knew where he was going and where he wanted to bring the class, what was most important to him was to respond to how the class was getting it. Jonathan was an exemplar for lifelong learning. A teacher, colleague, and friend that will be dearly missed."

Powers received a Knox Mellon Faculty Career Enhancement Grant for Interdisciplinary Course Enhancement for a course on sustainability with Paul Skrade in 2014.

He was a friendly, highly respected, and familiar figure to many students as a teacher, but also as the head coach of the Knox College Prairie Fire swim teams. He swam for four years at Amherst College, where he graduated magna cum laude in 1987. He was captain of the swim team at Amherst his senior year, and helped lead his squad to a 25th place finish at the NCAA Division III National Swimming and Diving Championships. Powers also competed in water polo at Amherst, serving as captain his senior year. He also was faculty advisor and coach for the Knox College men’s and women’s water polo clubs.

“We were all blessed to be in the presence of grace when we worked with Jonathan,” said Daniella Irle, director of Prairie Fire athletics.

Excerpts from individual tributes to Jonathan Powers from the June 16, 2022 Gathering of Friends to honor him

“I don’t think I have ever met a man who has done so much and taken credit for so little.”

“The single most heartwarming, generous person I have ever known. He has changed all of our lives.”

“He genuinely cared about students, and was a model of kindness, calmness, perseverance, and generosity of spirit.”

“A great friend, coworker, and teacher. I will miss him.”

“A good, kind, and decent human being in all regards. A generous man.”

“He put together a rigorous course, and students loved him for it.”

“If you think of students as bees, he had honey in his office.”

“He would wait for consensus, wait for you to come around.”

“Every message he got from alumni he would really care about.”

“I knew how much he cared for me, and cared for all of us.”

“Probably in my four years at Knox, he was the single most person I could rely on.”

“A person in my corner who genuinely cares and was always eager to listen. One of the kindest people I have ever met.”

“He cared deeply about Knox but even more about the students.”

“He gave me hope for the quirky, smart people who want to help other people.”

“Jonathan always pushed me to be the person I wanted to be.”

“He had a heart that was very expressive of his care. Always genuine.”

“He was always so kind and forgiving.”

“He was the best coach ever.”