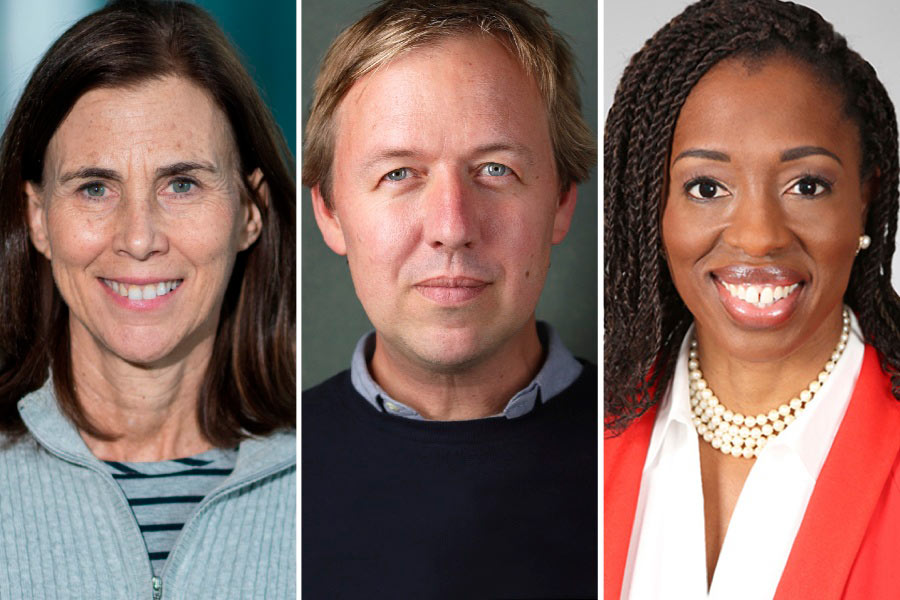 Knox College announced today the recipients of honorary degrees to be awarded for its 2021 Commencement exercises on Saturday, June 5. They are Dr. Ngozi O. Ezike, director of the Illinois Department of Public Health; Jennifer Lippincott-Schwartz, senior group leader at Howard Hughes Medical Institute’s Janelia Research Campus and a founding member of the neuronal cell biology program at Janelia; and Tom Rivett-Carnac, co-Founder of Global Optimism and an architect of the U.N. Paris Climate Agreement.

This year, each honorary degree recipient will receive their honorary degree citation virtually from President Teresa Amott, and will in turn record a message for graduates that will be broadcast to the campus community during Senior Week, the week prior to Commencement.

About the 2021 Honorary Degree recipients:

NGOZI O. EZIKE
Doctor of Science, in recognition of her commitment to the public’s well-being, her leadership, and her dedication to caring for patients with dignity and respect

Dr. Ngozi Ezike is a board-certified internist and pediatrician who joined the Illinois Department of Public Health (IDPH) in 2019 when Governor J.B. Pritzker selected her as director, and the Illinois Senate confirmed her for the position. She is the first Black woman ever to be appointed to lead the 143-year-old state agency. Dr. Ezike also is an assistant professor of pediatrics at Rush Medical College in Chicago.

As IDPH director, she has been at the forefront of Illinois’ response to the COVID-19 pandemic, receiving acclaim for her steadfast leadership and expertise. She has become a familiar and respected presence for Illinois, in part because of her steady and compassionate demeanor at media briefings where she has provided updates about the pandemic’s impact.

A May 2020 New York Times article about Dr. Ezike’s work to contain the pandemic in Illinois stated: “From the outset, she had her eye trained on the most vulnerable, including essential workers, many of whom are from minority communities. She has incorporated their needs into all of the state’s response proposals, from getting P.P.E. to those who need it most to providing targeted messaging and information. Dr. Ezike herself delivers her updates during the daily news conference in English and Spanish.”

Before joining the Illinois Department of Public Health, Dr. Ezike worked for more than 15 years for the Cook County (Illinois) Department of Public Health, promoting the organization’s mission of delivering integrated health services to patients with dignity and respect, regardless of their ability to pay. She has delivered inpatient care at Chicago’s Stroger Hospital, and primary and preventive care in community and school-based clinics.

She graduated with honors from Harvard University with a concentration in chemistry and earned her medical degree from the University of California at San Diego. She completed her internship and residency at Rush Medical Center in Chicago and earned a management certificate from Harvard Business School.

JENNIFER LIPPINCOTT-SCHWARTZ
Doctor of Science, In recognition of her commitment to education in Cell Biology, and her accomplishments in research

For her undergraduate degree, she attended Swarthmore College, where she majored in psychology and philosophy and graduated with honors in 1974. She then taught high school science in a rural village in Kenya for two years, before returning to the United States to attend a master’s program in biology at Stanford University. At Stanford, she worked on DNA repair in the laboratory of Philip Hanawalt—the biologist who discovered the process of repair replication of damaged DNA. She then did her Ph.D. work in biochemistry at Johns Hopkins University, where she studied the dynamics of membrane proteins.

In 2016, she joined the Howard Hughes Medical Institute–Janelia Research Campus to initiate the Neuronal Cell Biology Program at Janelia. As a senior leader there, she directs a lab that investigates the organization and dynamics of cells.

Dr. Lippincott-Schwartz has made major contributions to our understanding of how cells compartmentalize and coordinate their constituents for cell homeostasis in healthy and diseased states. Her lab devised and applied numerous innovative fluorescent imaging techniques to label, visualize, quantify and model specific protein populations and organelles in living cells. Of particular note was the creation of a protein that is invisible until activated by UV light when it becomes bright fluorescent green. Before this work, it was thought that membrane proteins and plasma membranes were fixed in place. However, this technique proved that molecules within cells move quite rapidly and are able to diffuse freely: a substantial shift in how scientists understand the components of cells.

This opened a new field by making it possible to label and image specific protein populations, enabling measurement of their turnover rates and determination of their temporal expression patterns in living cells or organisms. Working with physicist colleagues, Lippincott-Schwartz showed this protein could be used to break the diffraction barrier in light microscopy, launching superresolution technologies that are currently defining nanoscale architecture within cells.

TOM RIVETT-CARNAC
Doctor of Humane Letters, in recognition of his commitment to global environmental activism and his leadership in enacting real solutions

Through Global Optimism, Tom Rivett-Carnac works with some of the world’s most influential corporations and philanthropic leaders to advocate for policies to reduce greenhouse gas emissions. Though he and co-founder Christiana Figueres refer to themselves as “stubborn climate optimists” who believe that meeting the Paris Accord’s ambitious goal of net zero greenhouse gas emissions by 2050 is possible, Global Optimism’s emphasis is on the necessity of taking action within the next decade.

As the co-author of the best-selling book The Future We Choose, he has inspired citizens across the globe to become active participants in the fight against climate change. He also co-hosts the podcast Outrage + Optimism, where he speaks with figures working on the front lines of the fight against climate change. Now in its third season, Outrage + Optimism is in the midst of a special investigation with partner The Race to Zero, exploring the ways in which the power, transportation, construction, and food industries are working to reduce greenhouse gas emissions.

Tom Rivett-Carnac met his Global Optimism co-founder Christiana Figueres when he helped represent the Stakeholder Forum for a Sustainable Future at the 12th session of the United Nations Framework Convention on Climate Change. He was soon appointed to serve as senior advisor to Figueres, the executive secretary of the Convention, to develop and support the political strategy to secure binding international agreements.

Before working with the United Nations, he served as president and CEO of CDP, a nonprofit organization that uses the financial market to incentivize companies to disclose climate change-related risks and opportunities. Currently, more than 7,000 companies report climate information to CDP, which is then shared with investors to help them with valuation and asset allocation.