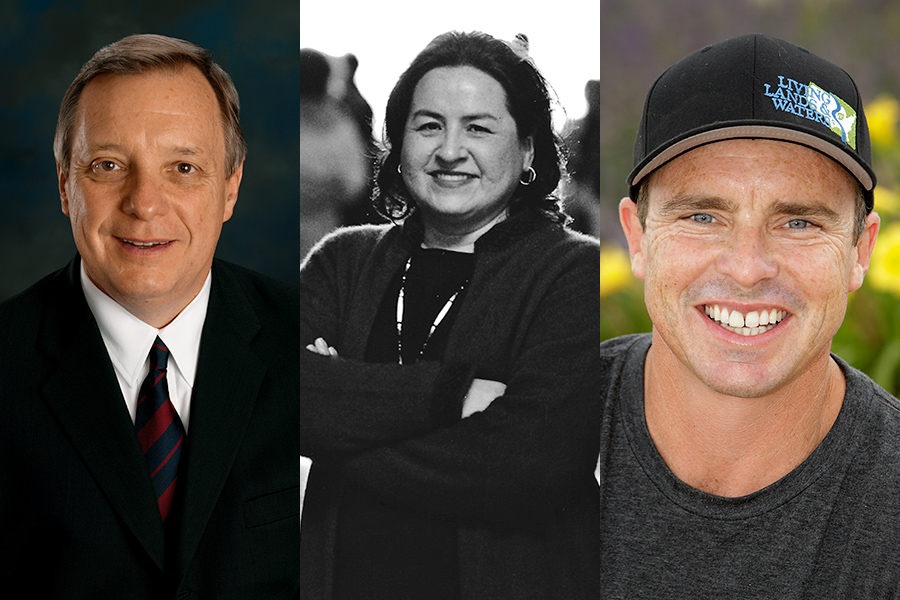 Knox College announced today the recipients of honorary degrees to be awarded at the 2016 Commencement Exercises on Sunday, June 5. They are United States Senator Richard Durbin, who will deliver the Commencement address; Brenda J. Child, a leading scholar on American Indian history; and Chad Pregracke, founder of Living Lands & Waters, a non-profit organization dedicated to cleaning up and preserving our nation's rivers.

About the 2016 Honorary Degree recipients:

Senator Dick Durbin, a Democrat from Springfield, is the 47th U.S. Senator from the State of Illinois, the state's senior senator, and the convener of Illinois' bipartisan congressional delegation.

Durbin also serves as the assistant Democratic leader, the second highest ranking position among the Senate Democrats. Also known as the minority whip, Senator Durbin has been elected to this leadership post by his Democratic colleagues every two years since 2005. He sits on the Senate Judiciary, Appropriations, and Rules Committees, and is the ranking member of the Judiciary Committee's Subcommittee on the Constitution and the Appropriations Committee's Defense subcommittee.

Elected to the U.S. Senate on November 5, 1996, and re-elected in 2002, 2008, and 2014, Durbin fills the seat left vacant by the retirement of his long-time friend and mentor, U.S. Senator Paul Simon. During his nearly 20 years in the U.S. Senate, Durbin has sponsored or co-sponsored legislation on many key state and national issues, including healthcare, consumer protection, gun safety, immigration and the DREAM Act, veterans benefits, and education. Most recently, he urged Senate leadership to take up and pass legislation to reauthorize the Perkins Loan Program, a critical lifeline for many low-income students.

Durbin was born and grew up in East St. Louis, Illinois. After graduating from Assumption High School in East St. Louis, he attended Georgetown University, where he received his B.S. and J. D. degrees. Prior to his election to the U.S. Senate, he served in the U.S. House of Representatives from 1983-1997. He resides in Springfield and makes approximately 50 round trips a year between Washington and Illinois.

Author and historian Brenda J. Child is a leading scholar of American Indian history and the interactions between Ojibwe people and the state in the nineteenth and twentieth centuries. Through her scholarship, her work with museums on the local and national level, and her community activism, she has supported a new telling of American Indian history for a general audience.

A professor in the Department of American Studies at the University of Minnesota, Child received her Ph.D. in history at the University of Iowa and was a Katrin Lamon Fellow at the School of American Research, Santa Fe, New Mexico. She is the author of Boarding School Seasons: American Indian Families, 1900-1940, which won the North American Indian Prose Award in 1998; Holding Our World Together: Ojibwe Women and the Survival of Community; and My Grandfather's Knocking Sticks: Ojibwe Family Life and Labor on the Reservation, which won the 2014 American Indian Book Award and the 2014 Jon Gjerde Prize for the best book in Midwestern history as awarded by the Midwestern History Association.

Child is also part of a research group that developed the Ojibwe People's Dictionary, which launched as a website in 2012, assisting in the reclamation and strengthening of the Ojibwe language as a spoken, living language. In addition to her scholarship, Child is a member of the board of trustees of the Minnesota Historical Society and the Smithsonian's National Museum of the American Indian and is a member of the Native American Council of The Eiteljorg Museum of Art in Indianapolis, Indiana.

Born on the Red Lake Ojibwe Reservation in northern Minnesota, Child is a citizen of the Red Lake Band of the Chippewa Nation and is one of 10 members of a committee writing a new Red Lake constitution. She resides with her family in Saint Paul and Bemidji, Minnesota.

Chad Pregracke is the founder of Living Lands & Waters, a non-profit organization based in East Moline, Illinois, dedicated to cleaning up and preserving our nation's rivers. To date, Living Lands & Waters and its more than 90,000 volunteers have removed almost nine million pounds of garbage from 22 rivers across the country.

Pregracke founded Living Lands & Waters in 1998 at the age of 23. Over the last 18 years, the organization has grown to include 10 full-time employees and a fleet of five barges, two towboats, six workboats, two skid steers, and seven work trucks. With this equipment, the crew is able to travel and work in an average of nine states a year along the Mississippi, Illinois, Ohio, Missouri, and Potomac Rivers, as well as many of their tributaries. The organization's mission also includes educational workshops and The Million Trees Project.

The idea for Living Lands & Waters came from Pregracke's personal experience working along the Illinois and Mississippi Rivers during his summer breaks from high school and college. He camped on the rivers' islands and shorelines to save money and fuel, noticing how neglected the rivers were, with the unsightly and toxic accumulation of trash along their banks. At 17, Pregracke started making calls to government agencies to notify them of the problem and soon decided that, if no one else was going to clean up the river, he would.

In addition to making a difference in the preservation of the nation's rivers, Pregracke's vision and leadership have garnered him a number of awards and honors over the years, including the Jefferson Award for Public Service in June 2002. He was named a CNN Hero of the Year in 2013, and is the author of From the Bottom Up: One Man's Crusade to Clean America's Rivers.

The 2016 Knox College Commencement will be held on Sunday, June 5, at 10:00 a.m. on the South Lawn of Old Main on the Knox College campus. It is free and open to the public.