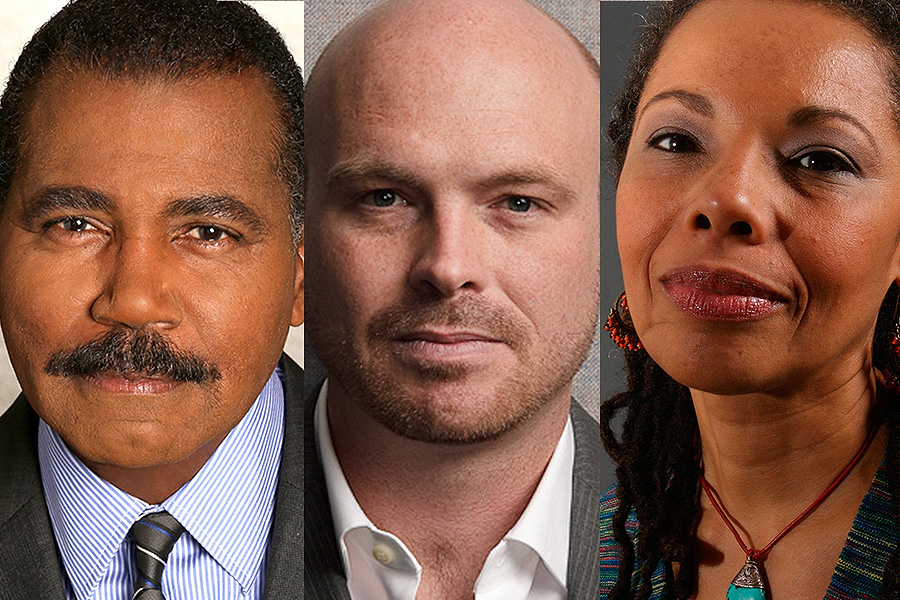 Knox College announced today the recipients of honorary degrees to be awarded at the 2015 Commencement Exercises on Sunday, June 7. They are Bill Whitaker, Emmy Award-winning journalist and 60 Minutes Correspondent, who will deliver the Commencement address; June Cross, Emmy Award-winning writer and producer; and Matthew Berg '00, CEO of a Kenya-based social enterprise technology company and one of Time Magazine's "100 Most Influential People" in 2010.

About the 2015 Honorary Degree recipients:

Bill Whitaker
During his 30-year career with CBS News, Bill Whitaker has covered nearly all of the country's major news stories, including three presidential campaigns; turned out feature stories and profiles on compelling national figures, including First Lady Michelle Obama; and served as a foreign correspondent, covering Japan's Fukushima nuclear disaster among other notable stories.

Whitaker began his career at CBS News in 1984 as a reporter based in Atlanta, where he covered the 1988 presidential campaign of Michael Dukakis and received an Emmy for his reports on the collapse of Jim and Tammy Bakker's television ministry. He then spent three years as a CBS News Tokyo correspondent, developing an impressive portfolio as a foreign correspondent. His coverage included stories throughout Asia, including the pro-democracy uprising in Tiananmen Square. He was also in Baghdad for the build-up to Desert Storm.

In 1992, Whitaker's career took him to Los Angeles, where he reported regularly for the CBS Evening News and other CBS News broadcasts, including Sunday Morning, turning out feature stories and thoughtful profiles. His most notable profiles included Barbra Streisand, Norman Lear, Gladys Knight, and Mike Tyson. Highlights of his career include interviews with First Lady Michelle Obama and Mexican President Enrique Peña Nieto and international coverage of the funeral of Nelson Mandela, the Fukushima nuclear disaster in Japan, the Haiti earthquake, and the early stages of the war in Afghanistan. In addition, he was the lead reporter covering the 2000 George W. Bush presidential campaign, and he covered Mitt Romney's presidential campaign in 2008. In the spring of 2014, he joined 60 Minutes, television's most watched news program, as a correspondent.

Whitaker graduated from Hobart and William Smith Colleges with a bachelor's degree in American history and from Boston University with a master's degree in African-American studies. He also attended the Master of Journalism program at the University of California, Berkeley.

June Cross
June Cross is an award-winning producer and writer with more than 30 years of television news and documentary experience. A two-time Emmy Award winner, she has completed a combined eight documentaries for PBS's Frontline, worked as a producer for the MacNeil/Lehrer NewsHour, as well as CBS News, and reported on the defense industry, the Middle East, and the intersection of poverty, politics, and race in the U.S. and in Haiti. Cross received her first Emmy in 1983 for her NewsHour reporting of the U.S. invasion of Grenada for Outstanding Coverage of a Single Breaking News Story. She received her second Emmy in 1997 for Secret Daughter, an autobiographical film that examined how race and color had affected her family. The documentary was honored that same year with a DuPont-Columbia Award for Excellence in Broadcast Journalism.

In addition to her work for Frontline and the NewsHour, Cross was an executive producer for This Far by Faith, a six-part PBS series on the African-American religious experience that broadcast in 2003. She is currently in pre-production on a film about HIV in rural America. Cross is also the author of the 2006 memoir Secret Daughter.

Cross received her B.A. from Harvard in 1975, and founded a program in documentary filmmaking at the Columbia University's Graduate School of Journalism, where she is currently a tenured professor. She was a fellow at Carnegie-Mellon University's School of Urban and Public Affairs and the W.E.B. DuBois Institute for Afro-American Studies at Harvard. Cross is a member of the National Association of Black Journalists, the Investigative Reporters and Editors, the Black Documentary Collective, the Council on Foreign Relations, and Phi Beta Kappa.

Matthew Berg
Knox College graduate Matthew Berg uses technology -- smart phones and text messaging -- to empower people in the developing world so they can lead better, healthier lives. He is co-founder and chief executive officer of Ona, a company that assists non-governmental organizations and other groups with data collection and analysis. Ona, which has offices in Nairobi, Kenya, and New York, has served clients that include UNICEF, the World Bank, and the World Health Organization.

One of Ona's recent projects involved collaborating with the World Health Organization on responding to the Ebola crisis by developing smartphone technology that helped bring the Ebola crisis under control.

Before launching Ona, Berg helped develop ChildCount+, a health monitoring system in Africa that led to reductions in child mortality rates. That work earned him a spot on Time Magazine's "100 Most Influential People in the World" list for 2010. He has worked as a volunteer in Africa for Geekcorps, a non-profit organization that expands Internet use in emerging nations. In addition, he formerly served as the information and communications technologies coordinator for the Millennium Villages Project at Columbia University, where he oversaw the use of technology to help achieve the United Nations Millennium Development goals in rural areas of Sub-Saharan Africa.

Berg was born in Cameroon, grew up in Senegal, and says that Africa remains a large part of who he is. He earned a bachelor's degree from Knox College in 2000, double-majoring in computer science and integrated international studies. While at Knox, he studied abroad in Zimbabwe and completed an Honors project about technology in Africa. Berg also is a PopTech! Social Innovation Fellow and a 2010 recipient of Knox's Young Alumni Achievement Award.