Harland Goudie, Chancie Ferris Booth Professor Emeritus of Art at Knox College, died December 7 in Chicago. He was 86. Goudie taught art at Knox from 1954 until his retirement in 1990.

A memorial service will be held Saturday, March 17 in the painting studio in Knox College's Ford Center for the Fine Arts.

Survivors include daughters Catherine Howell '79, and Leslie Warner '82. Goudie's wife, Joanne, who died November 12, 2011, taught art for many years at Carl Sandburg College in Galesburg. Burial was in Hope Cemetery, Galesburg. Memorials may be made to Knox College's Alumni Hall restoration.

"When Professor Goudie came to Knox, he helped lead an expansion of the Art Department, introducing courses in printmaking and ceramics," said Knox President Teresa Amott. "He contributed greatly to the design of the Ford Center for Fine Arts on campus, played an important role in the renovation of Seymour Library during the 1980s, and was instrumental in preventing the demolition of Alumni Hall." 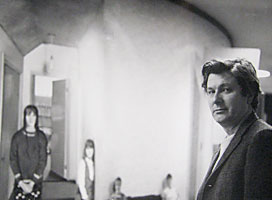 Among numerous academic honors, Goudie was selected to study at Jesus College, Oxford University as the 1974 Sang Exchange Scholar. His work is held in private and museum collections and has been reproduced in Printmaking Today, Art in America, and Artist's Proof.

In the 1960s, Goudie began experimenting with three-dimensional paintings. "A failed painting inspired Harland to cut into the picture from the sides and push the pieces into a type of relief," wrote Rick Ortner, professor emeritus of art and Goudie's colleague for 12 years. An art critic for the Chicago Sun-Times in 1971 praised Goudie's unusual "shaped canvas" technique: "Unlike other painters who break new ground, Goudie camouflages his innovations so that they never detract from the continuity of his message." 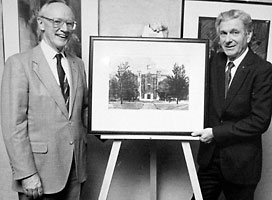 In 1987, Goudie was commissioned by Knox President John McCall to create an etching of Knox's Old Main, as part of the College's 150th anniversary celebration.

"Throughout [his] long career, what comes to the fore is liveliness of mind, range of curiosity and love of learning," Ortner wrote on the occasion of Goudie's retirement in 1990.

from the Knox Magazine, Summer 1990

As an artist or as a teacher, Harland Goudie can't be pigeonholed. Goudie, who retired this year (1990) after teaching at Knox College since 1954, once told the Galesburg Register-Mail that "an easily identifiable individualistic style is a stodgy concept, which art historians and critics hope an artist will adhere to so they can be easily classified, identified and dismissed." As an artist, Goudie has worked in many media -- painting, drawing, etching, "three dimensional" painting -- and in many styles. 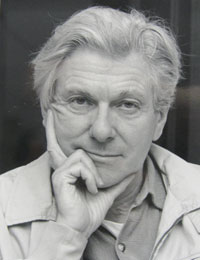 Abstract expressionism was popular in the 1950s, when he was earning his master's degree in fine arts at the University of Iowa. But during the 1960s, Goudie developed a more representational style. He further enhanced the sense of realism by using padding to "flesh out" his relief paintings.

As a professor, Goudie has seen generations of students explore art, both as a craft and as a mode of expression, which, in his view, "offers more freedom from the system than any other."

"Art works with very powerful symbols, although most people don't recognize them," Goudie said. The power and emotion that art generates can be seen in public debate over issues such as flag burning and a controversial flag exhibit at the Art Institute of Chicago, he stated. "Young people who want to bug their elders know that they can accomplish this through art. When they get a reaction, it gratifies their image of the artist as a 'bad boy.' "

In his years of teaching, Goudie said, he has seen plenty of "bad boys" and girls. "We've had some pretty wild stuff produced in class, and we've had exhibits that have offended people, but I never felt that I had to soft-pedal anything that the students did," he said. "We encourage students to find themselves." In fact, Goudie has discovered, the danger often is not that students will go "too far," but that they won't go far enough -- that they'll slavishly imitate the teacher's style.

Goudie has attempted to keep his students from imitating his work. "If you show your work to students, they'll tend to copy it," he said. "I've tried not to show it to them while I'm working on it."

Goudie's contributions to teaching at Knox have not been limited to art. As part of the interdisciplinary Freshman Preceptorial courses, he contributed notes to the instructor's manual in such diverse areas as medieval theologians St. Augustine and Thomas Aquinas, and on the Rig Veda, an ancient Hindu religious text. Goudie was recognized by the Knox faculty, which awarded him the 1988 Philip Green Wright-Lombard College Award for Distinguished Teaching by a tenured professor. The faculty also selected Goudie as the Sang Exchange Scholar to Oxford University in 1974.

Goudie also has been vitally interested in architecture, both new construction and historic preservation. "Harland contributed greatly to the design of Knox's Center for the Fine Arts, probably the finest and most functional visual arts facility at a liberal arts college in the region," said Frederick Ortner, associate professor of art at Knox. "He's also been a significant force in the renovation of Seymour Library."

Goudie has worked to preserve Knox's architectural heritage. "The buildings on campus really are a symbol of the College," he said. "They also create ties between Knox and Galesburg. That's why I was extremely pleased at the decision to stabilize Alumni Hall." According to Goudie, Alumni Hall, a flamboyant Romanesque structure built in 1890, "is part of a plan that includes Old Main in the center and buildings of equal weight -- Davis Hall and Alumni Hall -- on either side. It also relates to the Knox County Courthouse across the street." [Alumni Hall and the Knox County Courthouse were both designed by noted 19th-century architect E.E. Meyers.]

A native of Great Falls, Montana, Goudie received his undergraduate degree at Montana State University. He served in the United States Navy during World War II and the Korean War.