David P. Fridovich, a Knox College graduate and career Green Beret officer with the United States Army, was recently promoted to lieutenant general from major general. In a ceremony July 8 at MacDill Air Force Base in Tampa, Florida, Fridovich also was appointed director of the Center for Special Operations, the unit within the U.S. military's Special Operations Command that directs anti-terrorism campaigns.

In his remarks at the promotion ceremony, Fridovich emphasized the influence of his liberal arts background at Knox. "It's something that I won't forget in this new job," he said.

One of only forty lieutenant generals in the U.S. Army, Fridovich earned a bachelor's degree at Knox in 1974 and a master's degree in 1976 at Tulane University. He also has studied at the U.S. Command and General Staff College at Fort Leavenworth, Kansas; and at the British Forces Royal College of Defense Studies in London, England.

Since 1976 Fridovich has filled a variety of operational and command assignments, with the majority of his career in the Pacific Rim Region. He has served in South Korea, Haiti, and Bosnia-Herzegovina, and for the past several years directed a widely praised Special Forces counter-terrorism operation in the Philippines.

The indirect approach to counter-terrorism "demands diplomacy and respect for political sensitivities," wrote Fridovich, who majored in international relations at Knox.

According to the Wall Street Journal, while in the Philippines, Fridovich "made all [American] soldiers read the [Philippine] constitution. That drilled home the fact that they would be working within a sovereign nation with its own rules and laws."

Fridovich has met with classes and given a number of public lectures at Knox, including a talk in 2005 on the future of the U.S. military, in February when he received a 2007 Knox College Alumni Achievement Award, and most recently in June, when he was a featured speaker at Knox's 2007 Football Reunion. Fridovich was a three-year starting linebacker and co-captain for the Knox football team. He also is a member of the Tau Kappa Epsilon fraternity and has participated in volunteer activities for Knox's admission office.

"I have used the outcomes of the 'Knox Experience' almost every day of my U.S. Army life," Fridovich said in an interview earlier this year. "The value of a classic liberal arts education works exceedingly well, when you have to deal with a multitude of complex issues, emerging ideas, and the broadest base of individuals the world has to offer."

In the interview, Fridovich said that his Knox football teammates and coaches Harley Knosher and Al Reilly "kept me wanting to come back for yet another season," while long-time Knox faculty member Robert Seibert, Murphy Professor of Political Science, "saw something in me I didn't know existed, a student/scholar."

"I'm convinced this wouldn't have happened any place else," Fridovich said. 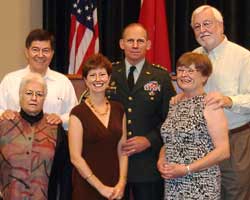 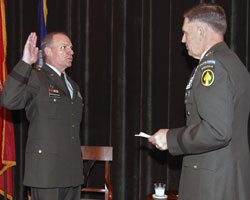