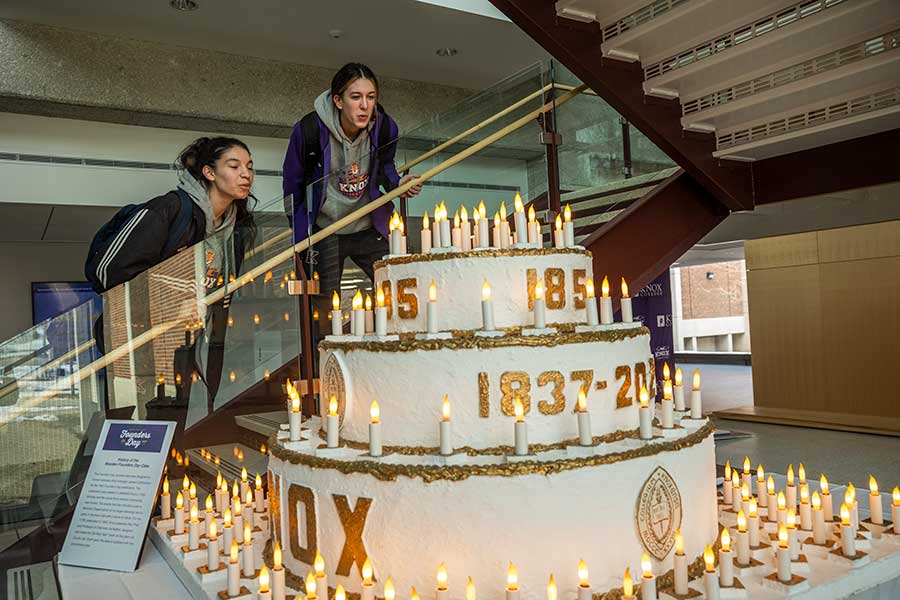 Knox College celebrated its 185th birthday with the traditional wooden cake and various events, including a conversation with past and present athletic directors, a presentation on the Underground Railroad by historian Owen Muelder '63, and a library exhibit about the College’s abolitionist history.

During a virtual ceremony on February 15, College President C. Andrew McGadney noted that he was celebrating his first Founders Day at Knox. “We all know well that our history here at Knox is built on bold ideas and hard work that result in transformational change,” he said. “Over 185 years, Knox community members have created an institution that continues to educate some of the most creative, justice-minded, and selfless citizens of the world. At our core, Knox is very much the same institution today that we were at our founding almost 200 years ago.”

Provost and Dean Michael Schneider pointed out that “this year of Founders Day does have a special weight” because of the recently announced $1.2 million grant that Knox has received from the Andrew W. Mellon Foundation.

“The grant will fund projects ranging from archival-based research courses to experiential learning opportunities, all with the purpose of understanding historical and contemporary social justice issues,” he said. “The grant will fund the creation of what we are calling the Abolition for All Time Humanities Lab, or Abolition Lab for short. This lab will serve as the design and development platform for new courses that connect humanistic study with students' civic and community engagement.”

The ceremony also featured Semenya McCord '71, who portrayed the 19th-century historical figure Susan Richardson, also known as “Aunt Sukey.” While in character, McCord described Richardson’s story of escaping slavery and fleeing to Knox County, Illinois. She later opened a laundry in Knoxville, Illinois, and helped others escape slavery through the Underground Railroad.

Knox observes Founders Day every February 15. The College was officially established on February 15, 1837, when the Illinois General Assembly⁠—whose members included Abraham Lincoln⁠—granted a charter to what then was Knox Manual Labor College. The Rev. George Washington Gale and other social reformers had moved from upstate New York to found the College and the city of Galesburg.

Here’s a recap of some of the other events from the 2022 Founders Week. Recordings of several of them can be viewed online.

“Knox College was a western anchor of the abolitionist movement and the Underground Railroad, one of the most important chapters in our nation’s history,” he said. “All of us who have a connection to Knox, I hope, will occasionally take time to stop and consider the fact that our school played a central role in what was the first integrated social movement in American history. We can all take great pride in that.”

For instance, they talked about what led them to Knox and why they stayed. Knosher said he came to Knox because of the opportunity to be a head basketball coach, and he stayed because the people “are second to none.” Irle said she joined the Knox community because “I was looking for a place that really put the student first.” Calandro and Eisele, both Knox graduates, spoke about how Knosher, now a longtime friend and mentor, encouraged them to come to Knox—first as students and later as athletic directors.

A special exhibit of historical artifacts related to the founding of Knox College and the city of Galesburg is on display in Seymour Library through mid-March. The exhibit, which explores what it means to be an abolitionist institution in the past and the present, consists of items from the library’s Special Collections and Archives. Highlights include a compass and a map of Illinois used by Knox’s founders, antislavery society pamphlets, and the diaries of abolitionist Samuel Wright.

The temporary exhibit, located on the main floor of Seymour Library, is open to the public. All Knox visitors must follow the College’s Knox Together guidelines.

(Photo at top of the page: Students pretend to blow out candles on the celebratory wooden cake. Photos below: Students pose with a cutout figure of George Washington Gale, one of Knox's founders, at a pop-up photo booth; and the library exhibit items include a compass and map used by the founders of Knox College and the city of Galesburg.) 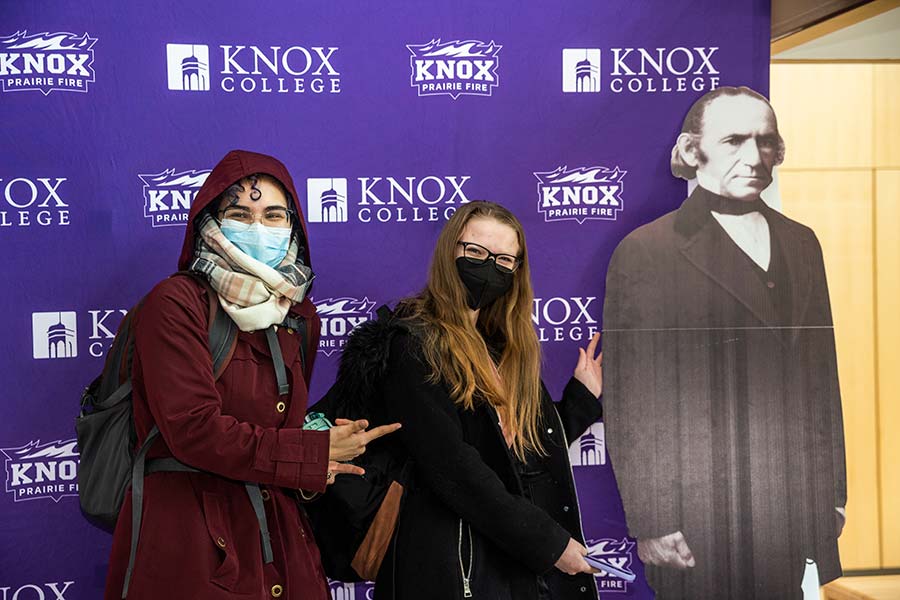 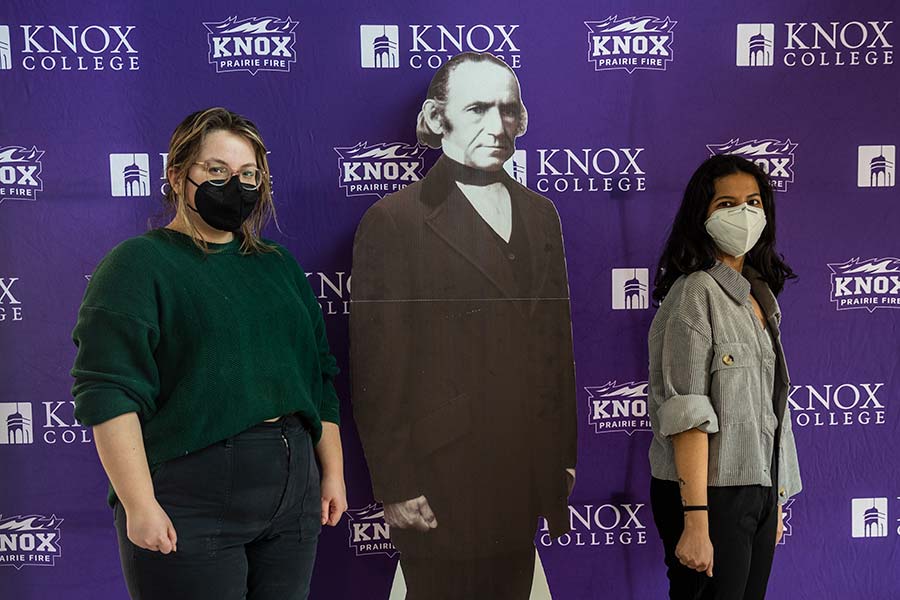 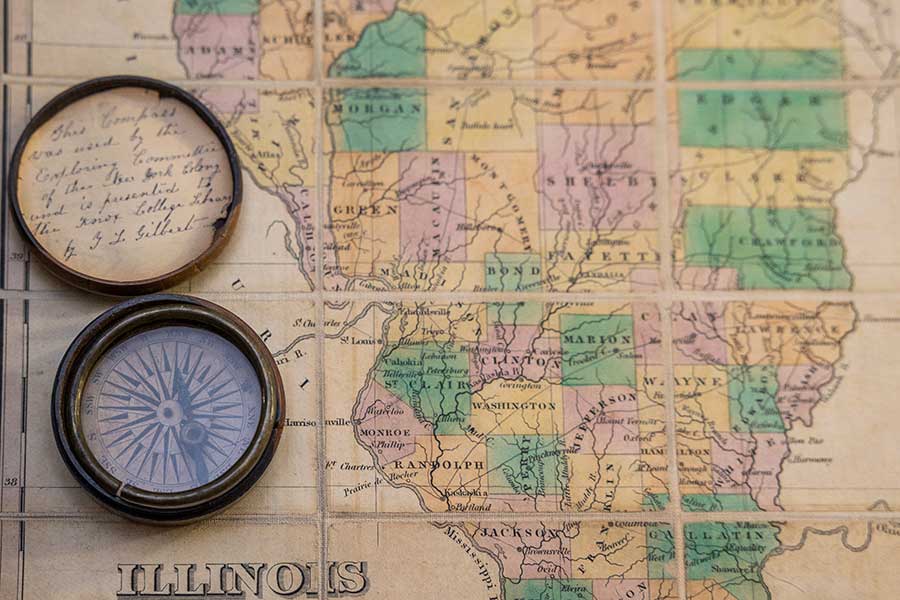