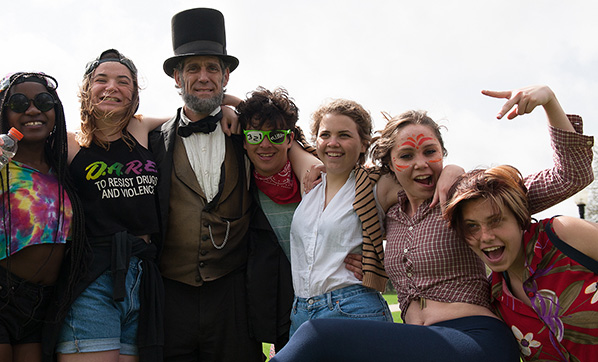 Skies were overcast, but that didn't put a damper on Knox College's Flunk Day, a traditional spring surprise party that dates back nearly 100 years. The theme of this year's event was Wild Wild Flunk and featured a mechanical bull, karaoke, gladiator joust, antique photos, and rock wall.

Flunk Day begins with the ringing of the Old Main bell at 6 a.m. as hundreds of students celebrate spring and a break from the intense 10-week academic term. Although planning begins weeks before the event, the exact date of Flunk Day is a closely guarded secret and the subject of numerous rumors.

The first Flunk Day of record was May 11, 1922, but the tradition of a student-initiated spring festival dates back to the early years of the 20th century and "Roughneck Day" -- which was the conclusion to "Roughneck Week," when the men didn't shave and both men and women students wore ragged clothing.

More Flunk Day pics in an album at the Knox Flickr site.