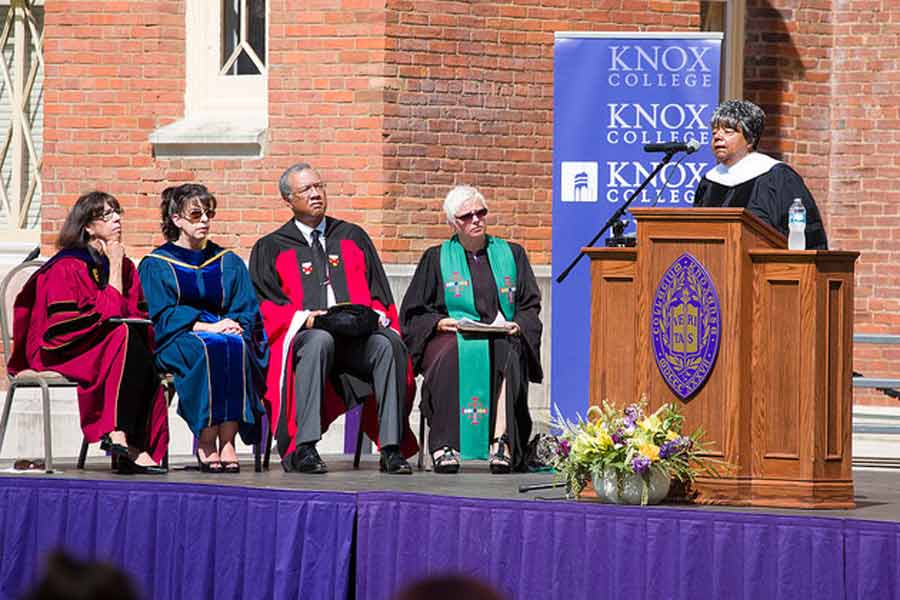 Civil rights icon Elizabeth Eckford ‘63, who helped integrate Arkansas schools as a member of the Little Rock Nine, returned to Knox College to receive an honorary doctorate and share her experiences and insights.

Eckford visited Knox and the Galesburg community on September 12, when she delivered the College’s Opening Convocation address in the morning and spoke at a separate evening event in the Orpheum Theatre. This was the first time in nearly 60 years that Eckford, who attended Knox for a year, had been on campus.

“I was startled when it was announced that I would receive an honorary degree because I had spent years not thinking I was worthy of being an here,” Eckford said, adding that the recognition from Knox makes her feel special.

"I remember Knox as being a welcoming place, but it means even more than that to me now," she said. "I wish more and more people knew about the uniqueness of Knox College."

“This is a privileged environment—small classes, you can actually talk to your professors and have encounters with people of different backgrounds.”

Eckford was awarded a Doctor of Humane Letters degree “in recognition of the courage she exhibited as one of the Little Rock Nine, of her enduring legacy as an icon of the American Civil Rights Movement, and of her inspiration as a role model for past, current, and future human rights activists,” according to her citation, read at Opening Convocation by Knox faculty member and Burkhardt Distinguished Chair in History Konrad Hamilton.

On September 4, 1957, Eckford was the first of the Little Rock Nine to arrive at Central High School. The 15-year-old ultimately was blocked from entering the school by the Arkansas National Guard, and she faced an incensed, segregationist mob alone, a moment captured in the iconic photograph by Will Counts. After completing high school, Eckford attended Knox College for a year in 1959-60, then returned to Little Rock and later received her bachelor's degree in history from Central State University in Wilberforce, Ohio.

In her Opening Convocation address, Eckford said that her experiences in high school resulted in post-traumatic stress disorder, a condition that went undiagnosed for decades.

“Many people think that the worst that happened was on the first attempt to go to school,” she said, referring to the day the famous photograph was taken. “But we endured hell every day.”

Even so, she said, she looked forward to her last class of the day, a speech class, “because there were two students in there who reached out to me and spoke to me as an ordinary person—every day.” Being accepted by those two students meant a great deal, she recalled.

Eckford urged members of her audience to reach out to anyone who is being harassed because a show of support can “help them live another day. It’s that important.”

Despite her PTSD, Eckford noted that she has been able to restart her life, in part by talking with students about her traumatic experiences.

“Doing that with students has actually made me stronger,” said Eckford, who also co-authored the recent book The Worst First Day: Bullied While Desegregating Central High, with Dr. Eurydice Stanley.

Knox student Emilie Barrett '20 said that Eckford’s remarks resonated with her. "I loved her point that no one should have to feel alone,” Barrett said. “If you see someone in a position where they don't look like they are feeling comfortable or feeling safe, you need to step in.”

While visiting Knox, Eckford spent time in a classroom with students taking Race and Ethnic Relations, a course taught by Wendel Hunigan, lecturer in anthropology-sociology.

She also shared a meal with several Knox students, including first-year Alex Crawford, a recent graduate from Central High School in Little Rock, Arkansas—the same school that Eckford helped to desegregate. In his hometown, Crawford was involved with The Memory Project, an oral history initiative to collect the stories of people who lived through civil rights struggles.

Crawford, who hadn’t previously met Eckford, said he was impressed by “the fact that there's a civil rights icon who is visiting this school, with its history of confronting inequality.” 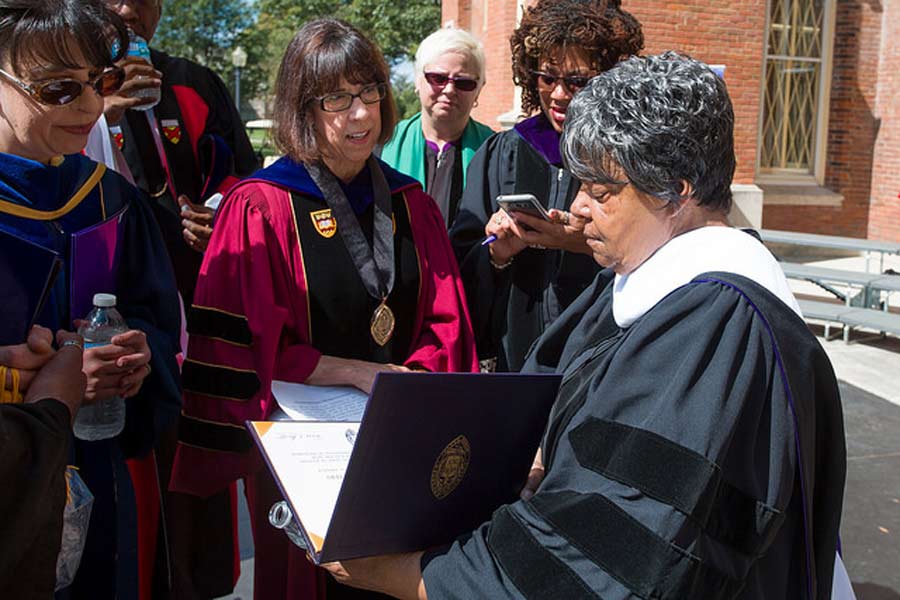 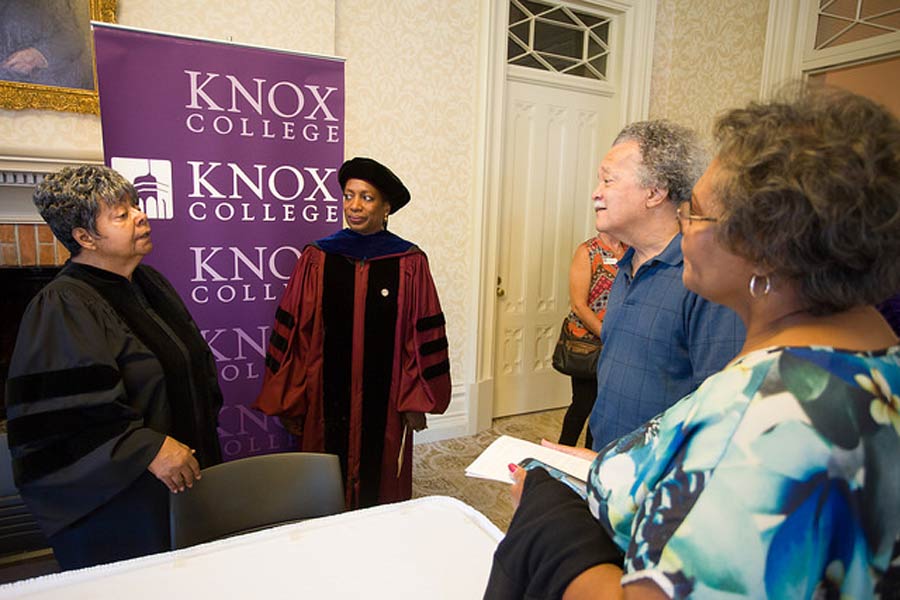 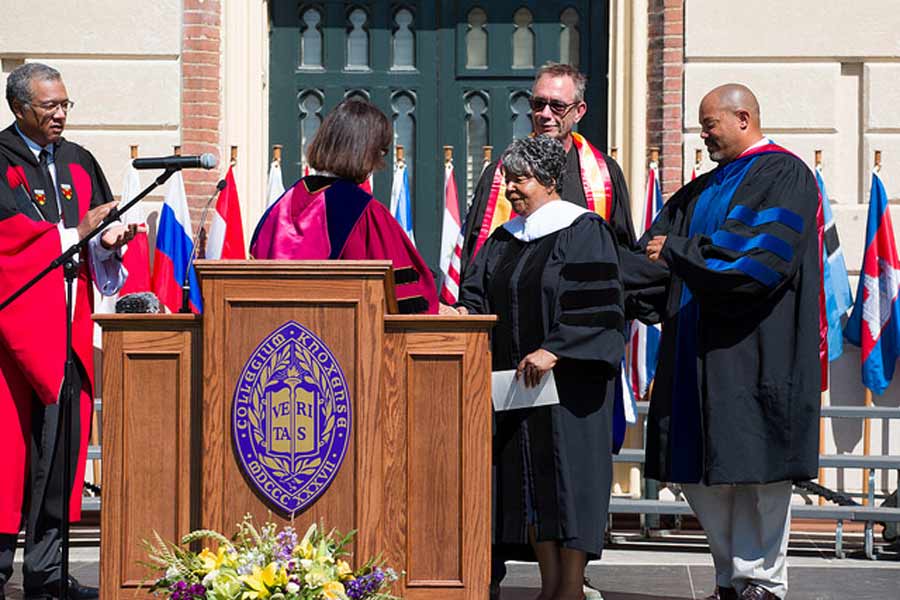 "We're all responsible for the kind of community that we have."—Elizabeth Eckford '63