"What is the role and meaning of theatre...in times of darkness, violence and human suffering?" This is the central question artists Jadranka Andelic and Dijana Milosevic of DAH Teatar confronted during their fall residency at Knox.

Named after the Serbian word "dah" pronounced "dokh," it can mean breath or soul. DAH Teatar was created by a group of women in Belgrade in 1991. At the same time, brutal ethnic conflicts that accompanied the break-up of Yugoslavia were occurring.

The residency included two performances of "Crossing the Line," several dance and theatre workshops, and a lecture by DAH Artistic Director, Dijana Milosivic: "The Role of the Artist in Dark Times."

Milosevic spoke of the inception and evolution of DAH as a political theatre group, showing some of their past performances in the main square of Belgrade and their studios. DAH’s goal was to expose some of the current events that those in power -- along with the nationally-run media -- refused to acknowledge.

As she spoke of the peaceful protests on the streets of Belgrade, Milosevic also described the vital role of humor and creativity, which can "withstand contradictions," during serious and potentially violent times. The police were brutal, but the protestors maintained their spirit with drums and an almost carnival spirited sense of strength in opposition. This was not a denial of the situation’s severity, she said, but rather a peaceful confrontation. For instance, when the police told protestors that they could no longer block traffic in the streets, the protestors became innovative, driving to protest and finding fault with their cars, congesting the main streets of Belgrade trying to "figure out" their automotive woes. Milosevic also discussed the importance of maintaining discipline in artistic expression, noting that " if we respect our work we have a chance of others respecting our work."

Throughout Milosevic's presentation, she wove a powerful message about the resiliency of humanity and the human spirit. In the classroom the students could feel it too. Grace Fourman, a senior majoring in international relations and Spanish, talked about her experience in a DAH dance workshop. Students were asked to draw their homes through movement, feeling the resistance of the material upon which they were drawing and the forces around them. "I'd been doing dance for fifteen years and Knox has afforded me so much new perspective," said Fourman. 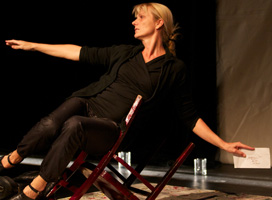 Later in the workshop, sound was slowly incorporated into the movements of multiple students as they formed groups and really collaborated, evolving their initial impulses. "It wasn't just about looking in a mirror to see if I matched the person next to me, but relaxing, feeling movement," a great contribution as Fourman begins creating her own choreography.

"Crossing the Line," a performance based on texts from Women's Side of War, illuminated what the role of theatre during dark times might look like in practice. The performance told the stories of women in the war who had been raped, lost loved ones, nearly starved and were beaten.

When asked about working with Knox students in workshops, Tasic, a DAH performer, said, "It was really very interesting because I never expected that they would achieve so much for such a short time. It was wonderful to see how students open themselves and just created great material. Also, what I really enjoyed was their focus, their readiness, and it is a very, very interesting group ready to go deep and express wonderful things in their work."

The residency, whose objective was making bridges and starting more conversations, wrapped up by taking part in the Take Back the Night rally held on the shores of Lake Storey. The rally marked a poignant ending for a group that seeks to create in the face of destructive forces, reminding us we are not helpless and that there is a lot of healing that can be done through artistic expression. After all, said Milosevic, "Whenever we are personal we are political."