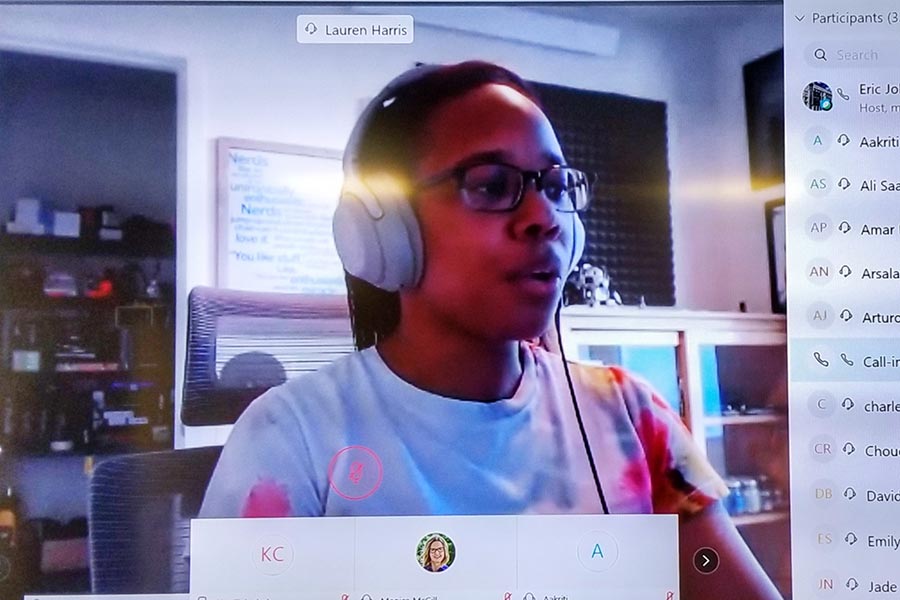 Persistence pays off, according to Lauren Harris ’14.

A software engineer at Microsoft, Harris was the keynote speaker for the Computer Science (CS) Virtual Career Summit, which kicked off via WebEx on April 14. More than 30 Knox students, faculty, and staff attended the presentation, which provided tips on entering the computer science field and information on working on a large corporation such as Microsoft.

The summit was held on campus last year, but recent events meant that Knox faculty and staff had to think creatively to reorganize the event.

“Because of the COVID-19 pandemic, our Seattle Tech Immersions trip for the spring had been postponed,” said Eric Johnson, associate director of alumni engagement. “We did not want to delay other amazing networking opportunities for students. We felt if any event could be done virtually, it was the CS Careers Summit.”

With the help of Monica McGill, associate professor of computer science, and Bishakha Upadhyaya ’21, computer science student ambassador and teaching assistant, the planning for the virtual careers summit began. The summit is funded in part by the National Center for Women & Information Technology.

“Both last year and this year we wanted to be fully inclusive and ensure that women were well-represented on our panels and as speakers,” said McGill. “Women are still a minority in the tech world, and NCWIT's mission is to help recruit and retain women in tech.

“Lauren has a great position at Microsoft engaging in software development and has been there since she graduated from Knox. We're fortunate to have many highly qualified CS alumni in great positions around the country—and the world. We want to give our current students a chance to hear from some of them.”

Harris began her undergraduate career in computer engineering at the University of Wisconsin-Madison, but quickly realized that she was in the wrong major. On a whim, she attended a career fair and met a Microsoft recruiter, who invited her to Seattle to interview for an internship—an interview which she says she “totally bombed.”

Harris took the feedback that Microsoft provides for interviewees and referred to it often during her transfer to Knox and change of major to computer science. Two Microsoft internships later, she was offered a full-time job by the company.

Her Knox education, Harris believes, has helped her on her path. She’s noticed that computer science majors often rely on technology to work out problems.

“At Knox, we often had to write things out by hand, and talk through the problems with a group of people.” Those skills in working as a team and communicating through a solution have been key to her success at Microsoft.

Harris also believes that the thirst for education she gained while at Knox is important to her job.

“I spend most of my time trying to learn—not just the code, but the culture, how to interact with a team. It’s important to have communication skills and be able to build muscle to be flexible in different situations.” Harris is working toward becoming a subject matter expert, providing a knowledge base for her co-workers.

Sailesh Dahal ‘20, a senior majoring in computer science, is scheduled to do an internship at Microsoft. He attended the summit and appreciated the chance to connect with a Knox graduate in his field.

“For students who have an internship or a job, she advised to not be hesitant to ask questions,” he said. “It’s common and okay to not know things at your internship and first job. Frequently asking questions will not give the impression of ignorance. Instead, knowing how to do things properly will serve you for the rest of your career.”

The series is sponsored by Women in Computer Science, the Bastian Family Center for Career Success, the Office of Alumni Engagement, and the Department of Computer Science.

Photo at top of page: A screenshot of Lauren Harris '14 presenting the keynote address at the Computer Science Virtual Career Summit.