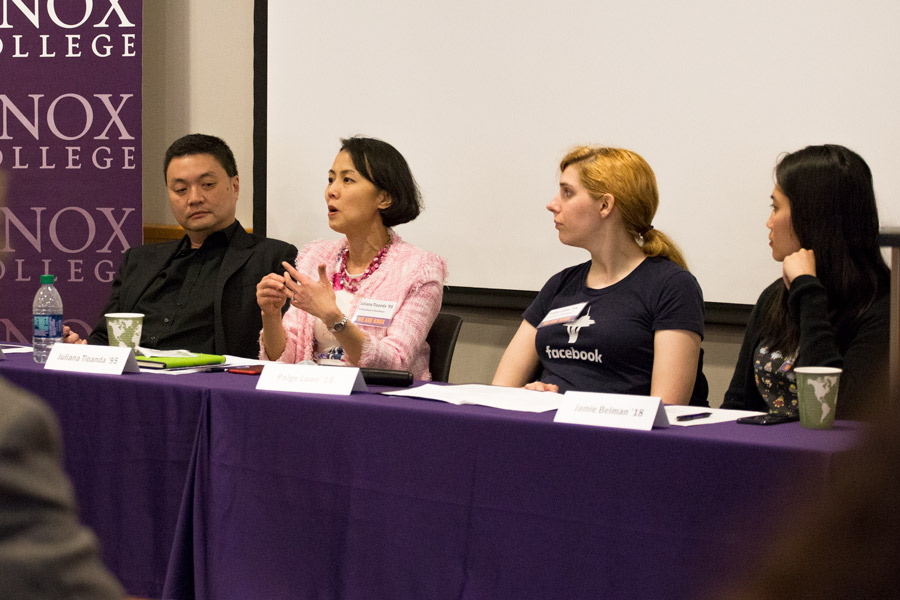 Alumni representing four tech giants—Microsoft, Amazon, Facebook, and Google—came to advise and network with current Knox students considering a career in technology as part of Knox's Professionals in Residence Series.

Juliana Tioanda '95 opened the series with a keynote that shared her journey from her childhood in Indonesia to her current position as a senior executive at Microsoft. Her story serves as an excellent example of how Knox students can leverage their background in creative and often unexpected ways.

For example, Tioanda interpreted her major in modern languages not as a simple tool to translate between two discrete languages, but as a model for how she might translate between programmers and customers, or project managers and executives. Tioanda also credited First-Year Preceptorial—a course all first-year students take that introduces them to liberal learning—as a highly influential experience: "It forces you to form an opinion and then to look at different perspectives, to hear different perspectives."

Ultimately, these experiences shaped Tioanda as a "conductor." She observed, "If you think about a symphony, you need somebody who can conduct and bring people together… and that’s often my role throughout the different positions that I've had. I do a lot of bridging communication as part of my job... and using technology to realize a vision."

Students responded eagerly to these presentations. Bishaka Upadhyaya '22, who assisted Monica McGill, associate professor of computer science, in planning the event, said she learned "not to hold yourself back from asking questions or asking for what you want. The fact that you're not asking might be leaving you behind."

Upadhyaya also found that an event like this has high impact in the liberal arts environment, especially workshops focused on resumes and interviewing. "It really helps that we're in a small college. Even the sessions are small, and if I'm in a group, I feel like [the alumni] know me and I can talk to them," she said.

In addition to delivering presentations, alumni were able to speak candidly during a panel on women in computer science. This topic—which covered experiences of many underrepresented minorities—is particularly timely, as the rising abundance of tech-related jobs, combined with myths and misinformation, can lead to a challenging transition for students today—representation being a central issue.

"Tech is not a meritocracy," says Aaron Khoo '96, injecting a healthy dose of reality. "There are a number of studies that have shown that without proper representation, you are going to get ignored, regardless of your skills."

Fortunately, alumni were optimistic and insightful. The panel unanimously struck down the idea that underrepresented students should be scared of this industry. Jaime Nguyen Belman '18, for one, highlighted how gradual changes in representation have a cascading effect. "I was the only woman software engineer on both teams [I worked on]," she said. "It was a struggle. But [now], students at Knox see me as someone to reach out to."

Tioanda pointed out the importance of "building your tribe" in the workplace—meaning people who support you, give you the chance to speak, and help to reassure or clarify in tough situations.

Tioanda also believes that it takes a joint effort to raise awareness in the tech industry—it’s important to note that discrimination is often "not because of bad intention, but just lack of knowledge." Khoo echoed this point, reassuring that there is a path forward. "It’s okay to point out to someone that they’re doing something non-inclusive. Sometimes, they just need to be made aware." 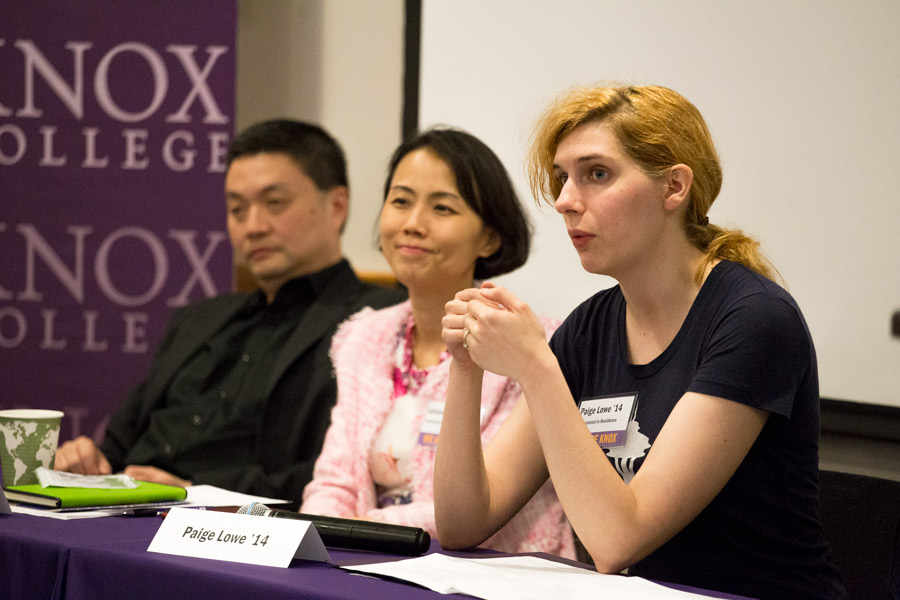 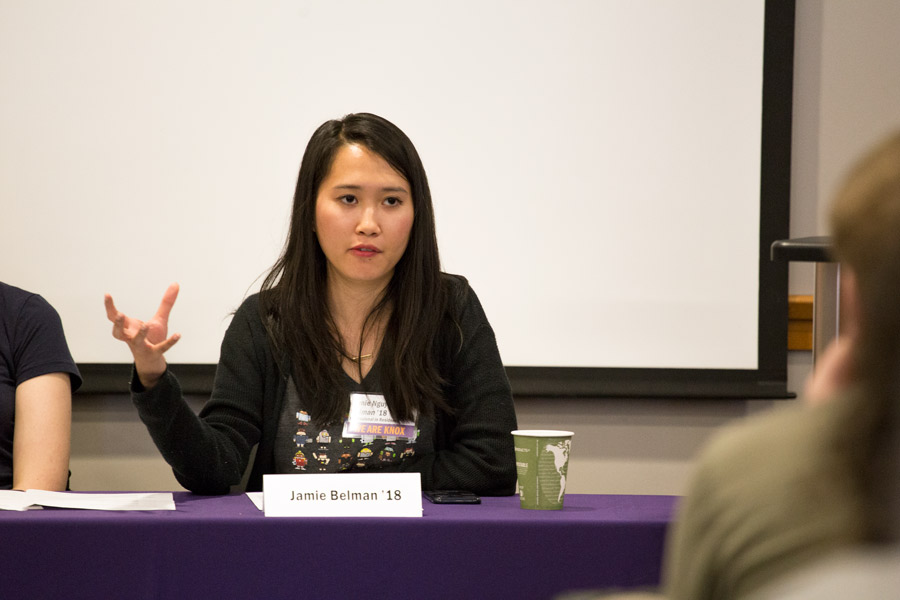 Still, there are times when it will get overwhelming—all four panelists agreed on this. Paige Lowe '14 encouraged sustainable approaches to dealing with self-doubt. "One of my tendencies is to beat myself up about a mistake I made, and then beat myself up about beating myself up," she said. "It actually goes better for me if I just let myself take the time to feel bad, but then move on from it."

The advice is particularly salient for minorities who may experience imposter syndrome, or a sense that one is not qualified and an ensuing guilt or shame. "If you’re worrying about how your manager is seeing you as a woman and carrying the weight of every woman programmer on your back, you’re not going to be able to carry that," said Lowe. "Let yourself make mistakes, because you’re human."

Belman reminded students that their differences are not just hurdles to overcome—difference is a tool that opens doors to greater accessibility. "At Google we appreciate diversity because our employees have to reflect our users—which is everyone," says Belman. "If you’re a woman, embrace your voice, your power."

The series closed out with ten tips from Lowe for achieving success in a high-profile, Silicon Valley-based tech company. Through her presentation, Lowe demonstrated how students can remain lifelong learners, find the right opportunities for them, and take care of themselves.

For Lowe, her Knox experience made a difference without her even knowing. "There are a lot of ways that the non-programming parts of the liberal arts education come together to do the parts of programming that we don't talk about," she said, recalling times when her skills in organization, communication, and problem solving made a crucial difference—skills that she picked up from editing The Knox Student and working the help desk at ITS.

Gaige Spencer '18 spoke to the importance of understanding that problems of representation are relevant to everyone. "I think there’s a skill set to being an ally… education and attending events like this help bring attention to these problems." Spencer also sees his time at Knox as helping to prepare him to work with people from all walks of life. "Here on campus I haven’t worked with too many homogenous groups, which is great. I think it’s been a good setup for my future career."

Remembering George Floyd: A Message to the Knox Community

President Teresa Amott, Dean of the College Michael Schneider, and Anne Ehrlich, vice president for student development, issue a statement on the murder of George Floyd and confirm Knox's ongoing commitment to equality and justice.

"If you go to a traditional engineering school, you have a foundation in hardcore coding. But you don’t necessarily have the well roundedness that a liberal arts education gives you. The ability to form connections between interesting different topics is really useful." -- Aaron Khoo