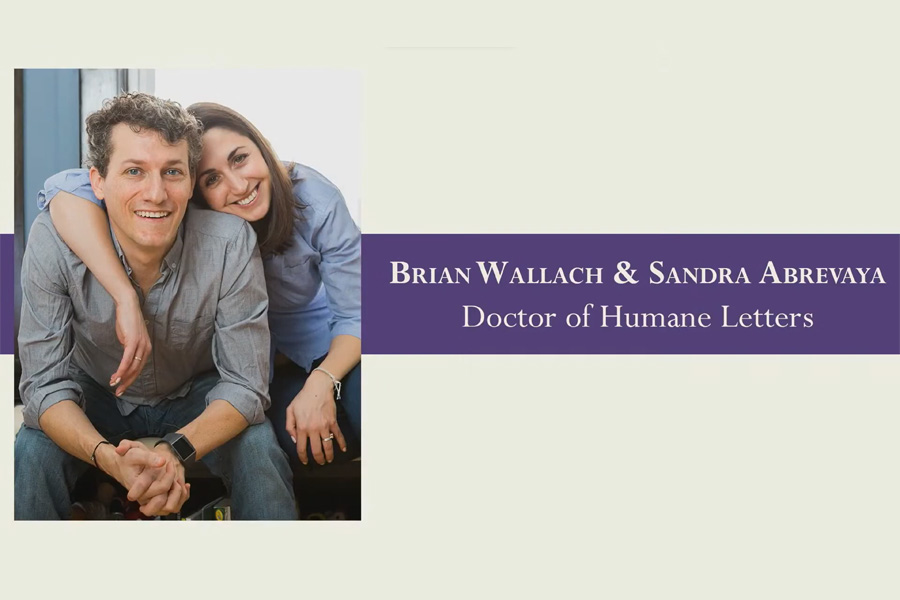 Members of the Class of 2020, honored guests, and distinguished faculty members, I am honored to present Brian Wallach and Sandra Abrevaya, the husband and wife team who founded I AM ALS, for the degree Doctor of Humane Letters.

I AM ALS is a patient-led, patient-centric movement to lead the fight for a cure for the deadly disease amyotrophic lateral sclerosis (ALS), sometimes called Lou Gehrig’s Disease, for which there is no cure and few treatments.

Brian received his Doctor of Law (JD) from Georgetown University Law Center, and is an attorney for Skadden, Arps Slate, Meagher & Flom LLP. He was diagnosed with ALS in November 2017, when he was a 37 year old Assistant United States Attorney in the Northern District of Illinois. Sandra, who graduated with a JD from Northwestern University School of law, was president and chief impact officer of an organization that prepares Chicago’s youth for a vibrant future, when Brian was diagnosed with ALS.

Brian and Sandra met on the 2008 Obama campaign, became staffers in the Obama White House, married in 2013, and have two young children. Sandra noticed that Brian's hand had a tremor, and asked him to see a doctor. He did, only to learn that he had ALS and likely would not live three years.

The doctor encouraged Brian to become an advocate for ALS funding, observing that Brian was a very smart and articulate lawyer. The doctor also let him know that ALS patients die so quickly and their families are so traumatized that they do not want to stay the course advocating for funding to support research and a cure for ALS. Brian and Sandra stepped up together and have done so much more than that doctor could have ever imagined.

With the help of the team who built the Obama online campaign engine, Brian and Sandra together started I AM ALS, which has become a leading funder for ALS and other neurological diseases. Brian and Sandra have flown around the world to advocate for increased funding and streamlined drug approval, and have testified repeatedly before Congress, and at conferences sponsored by major foundations such as The Gates Foundation. Their tireless work has resulted in an increase of $83 million federal funding to address ALS, and some promising therapies on the horizon.

Brian and Sandra have been featured on Sunday Today on NBC, CBS Sunday Morning, and in People magazine for their extraordinary work and commitment to ending ALS.

In recognition of their dedicated leadership in founding and running I AM ALS, and their tireless advocacy for funding and finding a cure for ALS, I present Brian Wallach and Sandra Abrevaya for the degree of Doctor of Humane Letters.