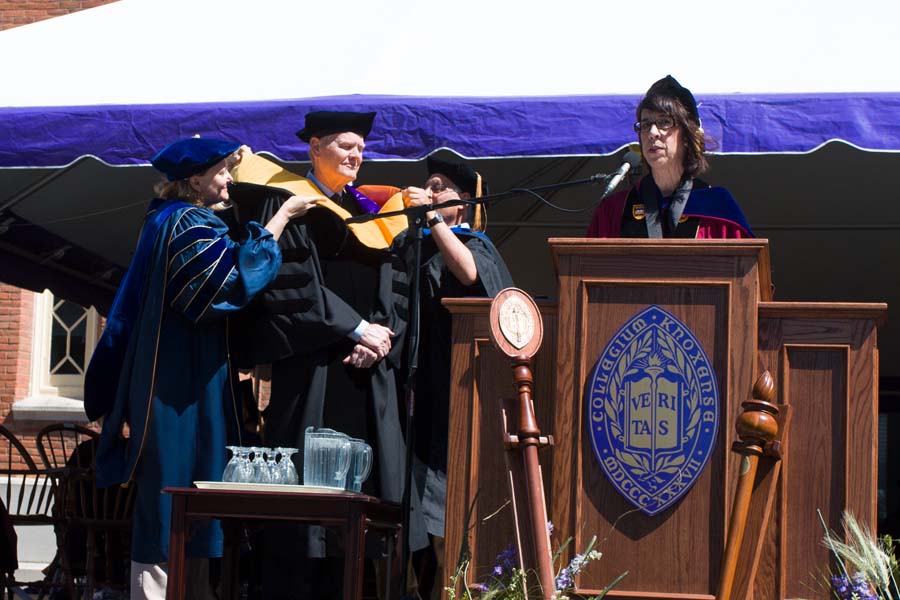 Citation by Gerald F. Vovis '65, Knox College Board of Trustees.

I am honored to present Michael W. Young, Richard and Jeanne Fisher Professor and vice president for academic affairs at The Rockefeller University and Nobel Prize-winning geneticist, for the degree of Doctor of Science.

Michael Young's interest in science, notably genetics, began when he was roughly eight or nine years old. While living with his family in Miami, Florida, he was exposed to a wide variety of tropical animals and vegetation, but it was a plant in his neighbor's home that piqued his curiosity. The plant produced white flowers that would only bloom at night, and, as he told the journal Medscape, "It just shocked me that you could get these rapid changes and that this was something that a plant could do." A few years later, his parents gave him a book on Darwin and evolution that contained a description of biological clocks that control the movement of flowers and navigation in birds and insects. His interest in understanding how these clocks, also known as circadian rhythms, worked would pique him again. This childhood curiosity ultimately launched an illustrious scientific career that has produced invaluable knowledge to the understanding of insect, animal, and human behavior.

Dr. Young attended The University of Texas at Austin for undergraduate and graduate studies, receiving a bachelor's degree in biology and a doctorate in genetics. While at Texas, he was introduced to Drosophila melanogaster—the common fruit fly—which would become the focus of his genetic research. He then went to Stanford University School of Medicine to complete his postdoctoral studies. In 1978, he joined the faculty at The Rockefeller University, where I first met him. He continues to work as the Richard and Jeanne Fisher Professor and as vice president for academic affairs.

His research findings are built upon more than three decades of laboratory work on circadian clocks, which led to the identification of molecular mechanisms that can regulate the circadian rhythm. These findings have implications for human sleep and mood disorders, as well as dysfunctions related to a variety of metabolic diseases. Today, his lab studies the actions of these genes in a variety of biological models, with a particular focus on how malfunction of the circadian clock gives rise to certain sleep disorders in humans. Dr. Young, along with fellow geneticists Jeffrey C. Hall and Michael Rosbash, was awarded a 2017 Nobel Prize in Physiology or Medicine for his discoveries.

In addition to the Nobel Prize, Dr. Young has received numerous awards over the course of his illustrious career, including the Gruber Foundation Neuroscience Prize, the Louisa Gross Horwitz Prize from Columbia University, the Canada Gairdner International Award, and the Shaw Prize in Life Science and Medicine. He is an elected member of the National Academy of Sciences and a fellow at the American Academy of Microbiology. He has also served as an investigator for the Howard Hughes Medical Institute and as head of the Rockefeller unit of the National Science Foundation Science and Technology Center for Biological Timing.

Upon notification of his receipt of the Nobel Prize, Dr. Young told the Rockefeller [University] community that the problem he began thinking about 40 years ago was "a hope and a dream, but it has unfolded in a way that couldn't be imagined in the beginning of our work." Richard P. Lifton, president of The Rockefeller University, also noted that Dr. Young's work "beautifully embodies the power of great basic science to illuminate our understanding of life on this planet."

Now, when basic research science is so vital to the success of our country and the existence of our planet, President Amott, in recognition of his contributions to genetics and his work "to illuminate our understanding of life on this planet," I present Michael W. Young for the degree of Doctor of Science.