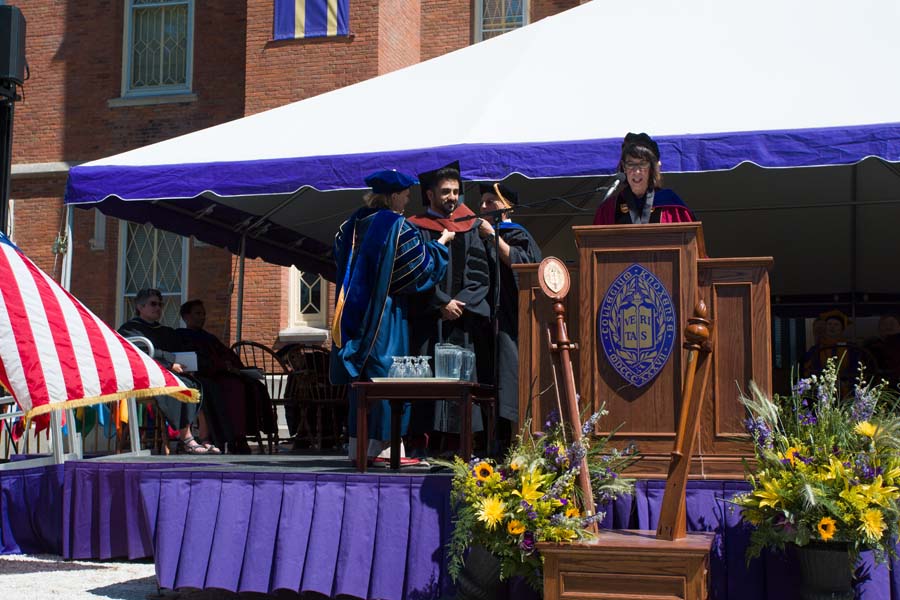 President Amott, I am honored to present Vir Das, India's premier comedian and Knox alumnus, for the degree of Doctor of Fine Arts.

Fast-forward four years, and the profile's prediction is well on its way to being realized. In 2017, Vir became the first Indian comedian to star in his own Netflix comedy special, Vir Das: Abroad Understanding, and debuted on late-night American television with two appearances on Conan; Variety magazine named him one of the world's Top 10 comedians to watch out for that same year. He recently completed an international comedy tour, Boarding Das, with stops in 33 countries on six continents, and he will appear in two upcoming Bollywood movies. In addition, he is currently working on a comedy series for the streaming network Hulu, recently landed a starring role on the new ABC weekly dramedy Whiskey Cavalier, and will soon start work on two additional comedy specials for Netflix. "I feel there's a vacancy for an authentic Indian comic voice, and I want to fill it," he told Variety.

In 1999, Vir Das, as he says, "boarded a flight to Knox College . . . and the wonderful teachers at Knox took an economics major from India and turned him into a theatre major and a comedian, and my parents have yet to forgive them." At Knox, Vir was a vibrant presence in the theatre department, where he honed both his acting and comedic skills. After graduating in 2002, he studied acting at the Stanislavsky School at Harvard University before returning to India to pursue his career in comedy.

A 2011 article in The New York Times included Vir among a new set of emerging comedians in India, known for bringing an American style to topics rooted in contemporary Indian culture. Through international tours and appearances, as well as his Netflix special, Vir is now bringing his Indian perspective to countries worldwide. In the opening of Abroad Understanding, he addresses this cultural perspective head-on: "I have an Indian accent. . . . I'm not doing a bit. I'm not impersonating a hilarious relative. . . . Today, for the first time in your life, maybe the Indian accent can be a perspective, not a punchline."

President Amott, in recognition of his accomplishments as a actor, comedian, musician, and producer and for his dedication to providing cross-cultural perspectives to audiences worldwide, I present Vir Das for the degree of Doctor of Fine Arts.