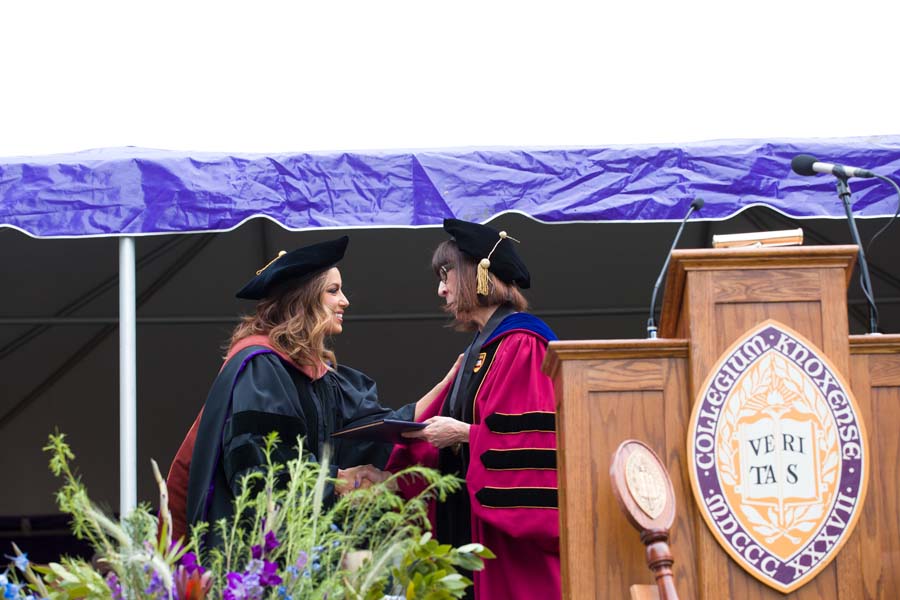 Citation read by Sherwood Kiraly, visiting instructor in English and Theatre and Writer-in-Residence

I am honored to present Eva Longoria, award-winning actress, producer, director, entrepreneur, and philanthropist, for the degree of Doctor of Fine Arts.

Eva Longoria may be best known for her award-winning role as Gabrielle Solis on the hit television show Desperate Housewives, but if you explore her career, you'll discover an impressive list of personal and professional accomplishments. She's as comfortable behind the camera as in front of it; she's a savvy businesswoman and entrepreneur, as well as a bestselling author; and she is a respected philanthropist and activist, supporting the Latino community and children with special needs. She also received her master's degree in Chicano studies and political science in 2013 from the California State University, Northridge, writing her thesis on "Success STEMS from Diversity: The Value of Latinas in STEM Careers." In her own words, she "wanted a better, more authentic understanding of what my community has gone through so I can help create change."

Ms. Longoria, who was born and raised in Corpus Christi, Texas, landed her first major acting role in the daytime soap opera The Young and the Restless, which earned her an American Latino Media Arts Award. Two years later, she became a household name with her star role on Desperate Housewives. During the show's eight-year run, Ms. Longoria received numerous awards for her performance, including the Screen Actors Guild Award and a Golden Globe. She has guest starred on the Golden Globe Award-winning comedy Brooklyn Nine-Nine and the hit drama Empire and has directed episodes of acclaimed series Jane the Virgin and the Emmy Award-winning Black-ish. She also stars in the feature films Lowriders and All Star Weekend, as well as the BBC miniseries Decline and Fall. Ms. Longoria has produced the documentary Harvest, which focuses on the plight of the estimated 500,000 child farm workers whose tireless efforts help feed America, and executive produced the documentary, Food Chains, a film that also exposes the current and historic exploitation of farm workers.

A pillar of the Latino community, she established The Eva Longoria Foundation to help Latinas build better futures for themselves and their families through education and entrepreneurship, support programs, and career training. In 2006, Ms. Longoria co-founded the non-profit organization Eva's Heroes, dedicated to enriching the lives of adolescents and young adults with developmental challenges. She also serves as a spokesperson for Padres Contra el Cancer, an organization supporting Latino families who have children with cancer.

In recognition of her philanthropy and activism, Ms. Longoria has received numerous recognition and awards, including the Dorothy I. Height Racial Justice Award by the YWCA USA. She was named "Philanthropist of the Year" by The Hollywood Reporter and honored by Variety with a Lifetime Achievement Award for their Power of Women issue.

President Amott, in recognition of her accomplishments as an award-winning entertainer and her commitment to social justice and service, I present Eva Longoria for the degree of Doctor of Fine Arts.