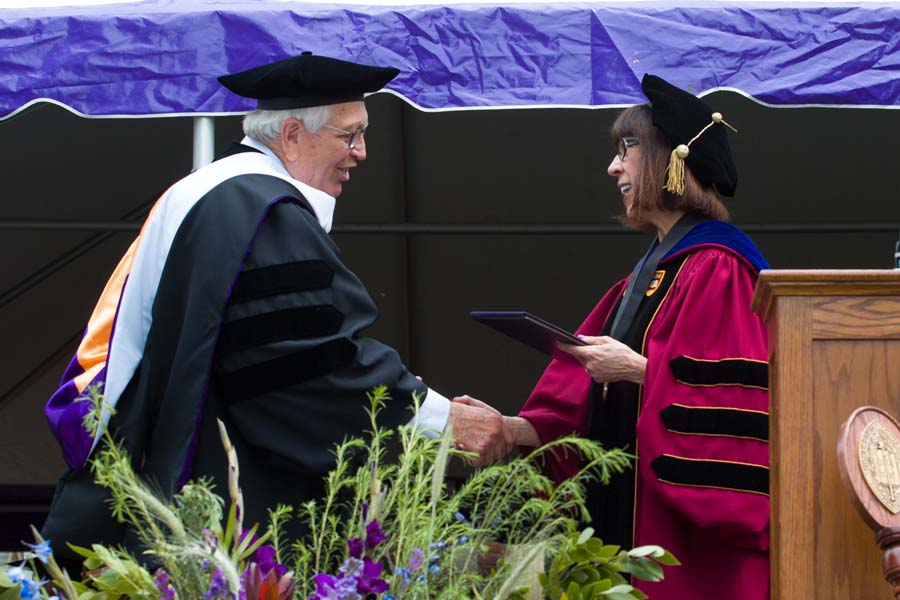 I am honored to present Wes Jackson, president emeritus of The Land Institute, for the degree of Doctor of Humane Letters.

Wes Jackson's career has taken him full circle. Born and raised on a farm near Topeka, Kansas, his early life was dedicated to the land, farming it to sustain his family's livelihood. After a successful career in academia took him out of Kansas and, ultimately, to California, Jackson returned to his home state to co-found The Land Institute. Once again, he dedicated his life to the land, researching and working to sustain our Earth by revolutionizing agriculture as we know it.

Jackson's friend and fellow environmentalist Wendell Berry has said of him, "I know of nobody who has thought more carefully or responsibly about the problems of agriculture and their possible solutions."

Jackson received a bachelor degree in biology at Kansas Wesleyan University. At the University of Kansas, he received a master's degree in botany, followed by a doctorate in genetics at North Carolina State University. He then pursued an academic career, ultimately teaching at California State University, Sacramento, where he helped to establish the country's first environmental studies department.

A tenured professor, he resigned in 1976 to co-found The Land Institute, a nonprofit organization whose goal is to create an agriculture that mimics natural ecosystems like prairies in order to produce ample yields by breeding perennial grains to be grown in mixtures, as well as to minimize the negative impacts of grain agriculture. A tangible result of this 50 to 100 year agenda is Kernza®, the first perennial grain in agriculture's 10,000 year history and the most recent domesticated grain in 4,200 years. Early versions of Kernza are now grown at pre-commercial scale on dozens of farms worldwide and appear in commercial food products.

Jackson has written extensively about this work in numerous articles and books, including Becoming Native to This Place; Nature as Measure: The Selected Essays of Wes Jackson; Consulting the Genius of the Place: An Ecological Approach to a New Agriculture; and New Roots for Agriculture. He was a 1990 Pew Scholar in Conservation and the Environment and a 1992 MacArthur Fellow, and he has received the Right Livelihood Award—the so-called "alternative Nobel Prize" presented annually in Sweden—the University of Kansas Distinguished Service Award, and the University of Kansas College of Liberal Arts & Sciences' Distinguished Alumni Award. Rolling Stone has called him one of "100 agents of change." Life magazine named him as one of 18 individuals they predict will be among the 100 "important Americans of the 20th century." And in 2005, Smithsonian included Jackson as one of "35 Who Made a Difference."

Yet perhaps his career and accomplishments can be summed up most effectively in his own words: "If your life's work can be accomplished in your lifetime, you're not thinking big enough."

President Amott, in recognition of his visionary work in environmental studies and his contributions to the sustainable agriculture movement, I present Wes Jackson for the degree of Doctor of Humane Letters.