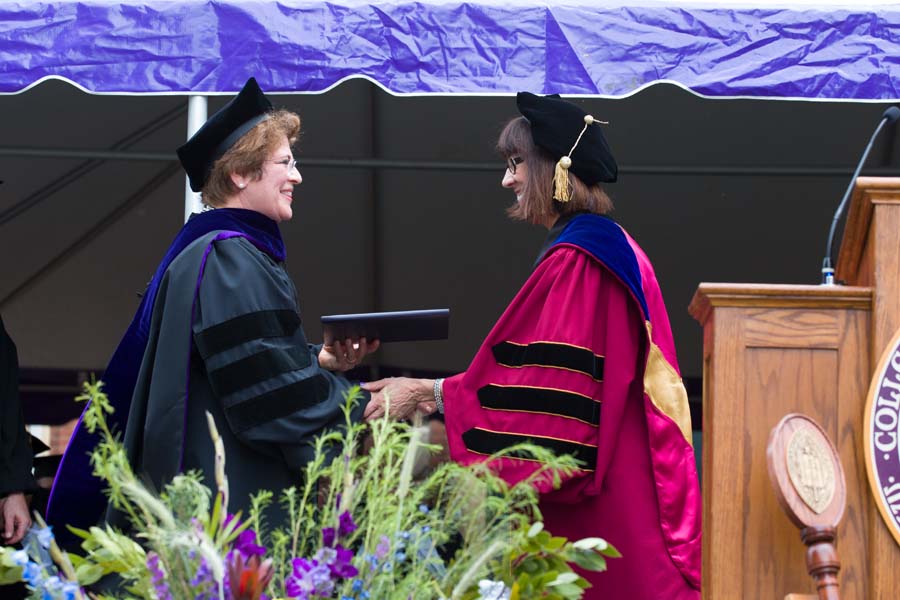 I am honored to present Ambassador Levin, distinguished fellow at the Chicago Council of Global Affairs, for the degree of Doctor of Laws.

Ambassador Fay Hartog-Levin was the 65th U.S ambassador to the Kingdom of the Netherlands. She served from 2009-2011 as chief of mission of an embassy that included 15 federal agencies, four locations, and more than 250 employees. In addition to embassy management, her areas of focus and impact included a "Green Agenda," engagement with diverse audiences, and public diplomacy through cultural exchanges. Born shortly after her parents immigrated from the Netherlands to the United States, she was the first U.S. ambassador in this post to have Dutch parents. Upon her resignation in 2011, Ambassador Levin wrote: "To be American ambassador anywhere is an honor. To be ambassador to the country of my parents' birth is a unique privilege."

Prior to her appointment as ambassador, she was a senior consultant at Res Publica Group, a public relations and government affairs consultancy in Chicago, where she advised nonprofit and governmental clients. From 1997-2005, she served as vice president of external affairs at Chicago's Field Museum representing the museum in its relationships with federal, state, and city governments and community affairs.

A graduate of Northwestern University and Loyola University School of Law, Ambassador Levin began her career as a legal advisor at the Illinois State Board of Education. She then joined the law firm Seyfarth, Shaw, representing primarily school boards, private and public colleges, and social service agencies. She published many articles and was a frequent speaker on topics related to school and employment law and crisis management.

In her current role at the Chicago Council on Global Affairs, Ambassador Levin works on political, international, and environmental issues. She is a lecturer at the University of Chicago Law School, teaching a course on federalism and state social policy, and also serves as a trustee of the Harry and Jeanette Weinberg Foundation.

Ambassador Levin is an active member of her community and supporter of education and the arts, serving on a variety of regional and national boards. She is a member of the board of the Chicago Council on Global Affairs, the National Archives Foundation, and the Roosevelt Institute, and serves as vice chair of the board of trustees of Window to the World Communications, Inc. Previously, she served on the boards of DePaul University, Columbia College Chicago, and the Merit School of Music. She was honored with the Illinois Arts Alliance's "Citizen Advocate Award" in 2013 and was the 2016 recipient of Loyola Law School's Damen Award for distinguished community service.

President Amott, in recognition of her distinguished career, service to her country, and dedication to her community, I present Ambassador Fay Hartog-Levin for the degree of Doctor of Laws.