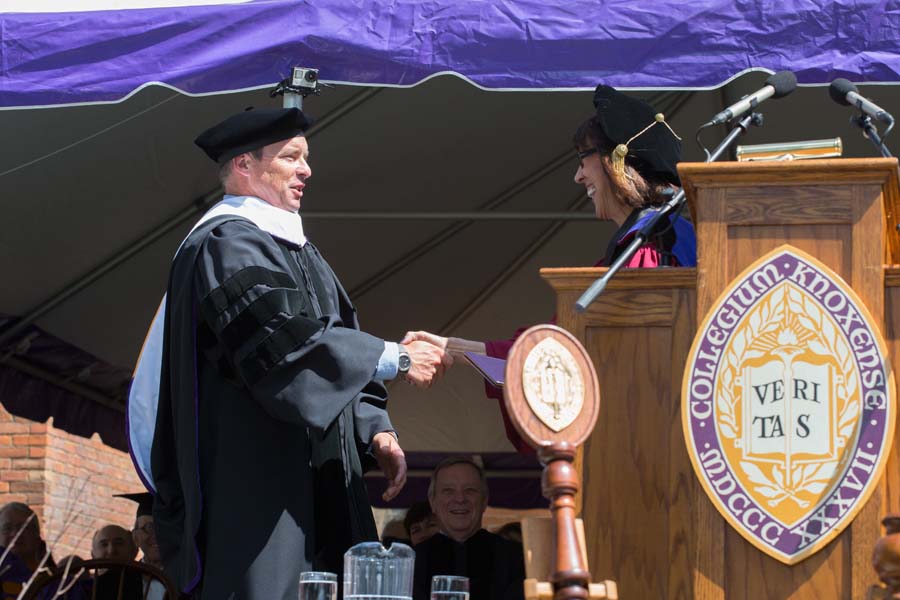 I am honored to present Chad Pregracke, founder of Living Lands & Waters, a nonprofit organization dedicated to cleaning up and preserving our nation's rivers, for the degree of Doctor of Humane Letters.

Chad Pregracke grew up in Hampton, Illinois, with the Mississippi River serving as his backyard. He spent his summer breaks from high school and college working on both the Mississippi and Illinois Rivers as a commercial fisherman, shell diver, and barge hand. He camped on the rivers' islands and shorelines to save money and fuel and quickly noticed how neglected the rivers were, with the unsightly and toxic accumulation of trash along their banks. This neglect prompted him, at the age of 17, to start making calls to government agencies, notifying them of the problem. Not happy with the response, he soon decided that if no one else was going to clean up the rivers, he would.

In 1998, at the age of 23, Pregracke founded Living Lands & Waters. Since its founding, the organization has grown to include 10 full-time employees and a fleet of five barges, two towboats, five workboats, two skid steers, seven work trucks, an excavator, and a crane. With this equipment, the crew is able to travel and work in an average of nine states a year along the Mississippi, Illinois, Ohio, Missouri, and other rivers, as well as many of their tributaries. The organization's mission also includes educational workshops and The Million Trees Project.

Over the last 18 years, Living Land & Waters' more than 95,000 volunteers have removed almost 9 million pounds of garbage from 23 rivers in 20 states. The millions of pounds of garbage, 80 percent of which is later recycled, has included one combine harvester, four pianos, 13 hot tubs, 105 bowling balls, 225 washing machines, 1,105 refrigerators, and more than 78,000 tires, to name just a few items. In recognition of his preservation work, Pregracke's vision and leadership have garnered him a number of awards and honors over the years, including the Jefferson Award for Public Service in June 2002 and the Illinois Environmental Hero Award in 2007. He was named a CNN Hero of the Year in 2013, is the author of From the Bottom Up: One Man's Crusade to Clean America's Rivers, and tours the globe as an environmental speaker.

Chad Pregracke is proof that one person can make a difference. What started as a personal commitment at the age of 17 to help clean up his local environment has grown into a movement that has engaged more than 95,000 people around the world. As he told CNN in 2013, "Change is slow, like a barge or train, (but) once it builds momentum, it's hard to stop."

President Amott, in recognition of his heroic efforts to clean and preserve our nation's waterways, I present Chad Pregracke for the degree of Doctor of Humane Letters.