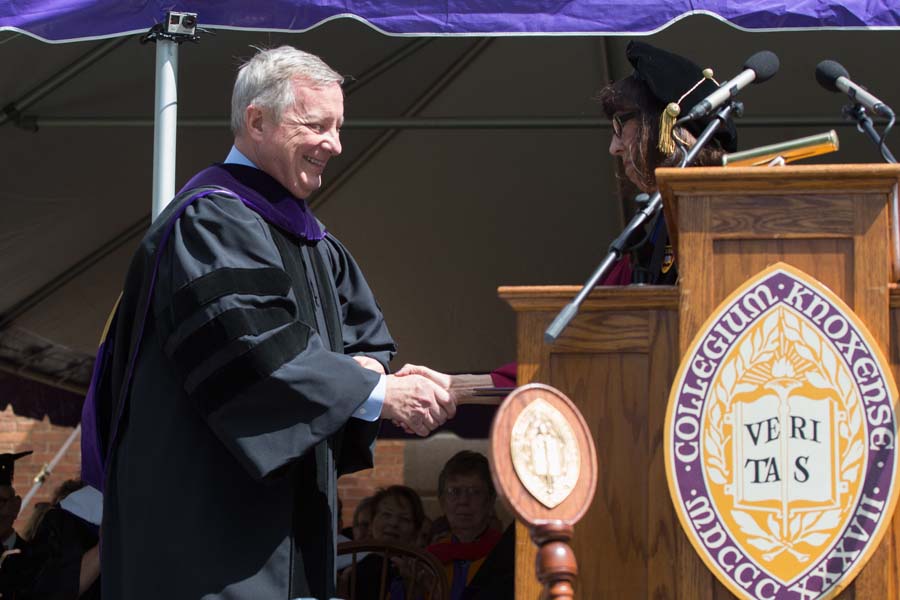 I am honored to present The Honorable Richard J. Durbin, United States Senator from the State of Illinois, for the degree of Doctor of Law.

In its nearly 180-year history, Knox College has forged relationships with a number of our nation's notable public servants, including Presidents, members of Congress, and those who aspired to these important positions. Individuals including Abraham Lincoln, John Lewis, Paul Simon, Barack Obama, and Bill Clinton all have received honorary degrees from our prairie college, many right here on the South Lawn. Today, it is an honor to add United States Senator Richard J. Durbin to this list of distinguished public servants.

Senator Durbin, a Democrat from Springfield, is the 47th U.S. Senator from the State of Illinois, the state's senior senator, and the convener of Illinois' bipartisan congressional delegation. He also serves as the assistant Democratic leader, known as the minority whip, the second highest ranking position among the Senate Democrats. Senator Durbin has been elected to this leadership post by his Democratic colleagues every two years since 2005. He sits on the Senate Judiciary, Appropriations, and Rules Committees, and is the ranking member of the Judiciary Committee's Subcommittee on the Constitution and the Appropriations Committee's defense subcommittee.

Senator Durbin was born and grew up in East St. Louis, Illinois. After graduating from Assumption High School, he attended Georgetown University, where he received his B.S. and J.D. degrees. Prior to his election to the U.S. Senate, he served in the U.S. House of Representatives from 1983-1997. Filling the seat left vacant by the retirement of his long-time friend and mentor, Paul Simon, Senator Durbin was elected to the U.S. Senate on November 5, 1996, and re-elected in 2002, 2008, and 2014. He resides in Springfield and makes approximately 50 round trips a year between Washington and Illinois.

Knox College may not be Senator Durbin's official alma mater, but his record of service speaks to the College's long-standing commitments and priorities. During his time in Washington, he has sponsored or co-sponsored legislation on many pivotal state and national issues, including healthcare, consumer protection, gun safety, immigration and the DREAM Act, veterans benefits, and education. Most recently, he urged Senate leadership to take up and pass legislation to reauthorize the Perkins Loan Program, a critical lifeline for many low-income students.

Senator Durbin has also been a long-time friend to Knox, most notably, helping the College secure a federal grant to support the development of the history exhibits found on the third floor of the historic Alumni Hall (to our left). His early support of this restoration project helped build the foundation for the transformation of Alumni Hall from a once empty building to a vibrant gateway to Knox College and its community.

President Amott, in recognition of his distinguished career in public service, honorably serving the people of Illinois in the United States Senate for the last 20 years, and his contributions to the betterment of his country, I present The Honorable Richard J. Durbin for the degree of Doctor of Law.