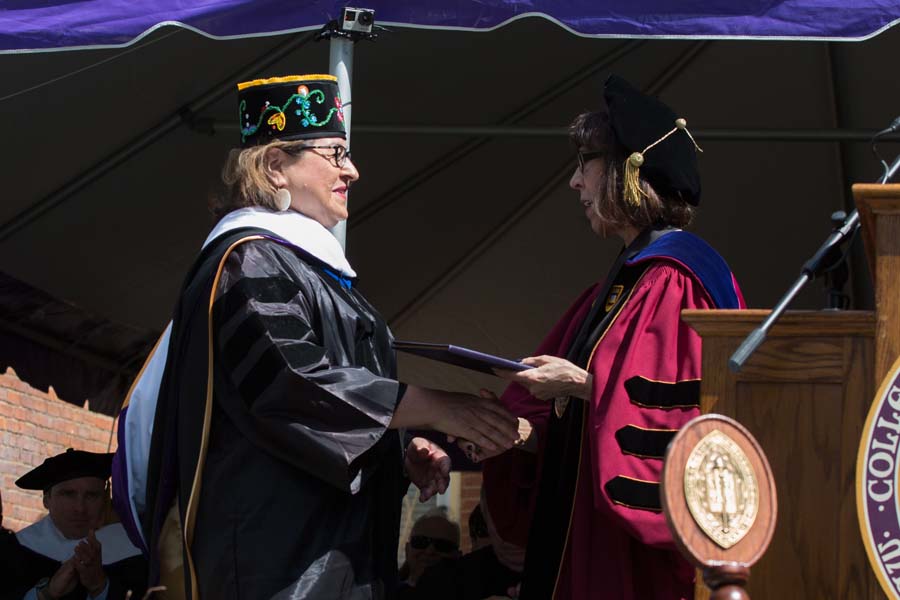 I am honored to present Brenda J. Child, a leading scholar of American Indian history, for the degree of Doctor of Humane Letters.

Author and historian Brenda J. Child was born on the Red Lake Ojibwe Reservation in northern Minnesota and has dedicated her scholarly research and work to documenting and exploring the interactions between Ojibwe people and the state in the nineteenth and twentieth centuries, helping to redress an imbalance in what most non-Native people know about the Native past.

Professor Child received her Ph.D. in history at the University of Iowa and was a Katrin Lamon Fellow at the School of American Research, Santa Fe, New Mexico. A professor in the Department of American Studies at the University of Minnesota, she has taught American history for more than 20 years, specializing in American Indian history, native culture, and multiculturalism. Her department also offers Dakota and Ojibwe language study.

She is the author of Boarding School Seasons: American Indian Families, 1900-1940, which won the North American Indian Prose Award in 1998, and Holding Our World Together: Ojibwe Women and the Survival of Community, and the co-author of Indian Subjects: Hemispheric Perspectives on the History of Indigenous Education. Her most recent publication, My Grandfather's Knocking Sticks: Ojibwe Family Life and Labor on the Reservation, combines a family memoir of her grandparents' working lives with a broader history of others of their generation. My Grandfather's Knocking Sticks won the 2014 American Indian Book Award and the 2014 Jon Gjerde Prize for the best book in Midwestern history as awarded by the Midwestern History Association. The selection committee for the Gjerde Prize praised Child's memoir as "an eloquent study of family life which locates personal experience in the larger experience of the Ojibwe people and the Midwest as a whole."

In addition to her scholarship, Professor Child is a member of the board of trustees of the Minnesota Historical Society and the Smithsonian's National Museum of the American Indian and is a member of the Native American Council of The Eiteljorg Museum of Art in Indianapolis, Indiana. She is also part of a research group that developed the Ojibwe People's Dictionary, which launched as a website in 2012, assisting in the reclamation and strengthening of the Ojibwe language as a spoken, living language. The project was supported with funds from Minnesota's Historical and Cultural Heritage Fund and National Science Foundation. A citizen of the Red Lake Band of the Chippewa Nation, Professor Child is one of 10 members of a committee writing a new Red Lake constitution. Her continued work for her community, in both language reclamation and constitutional revision, speak eloquently of her passion for the continued flourishing of the Ojibwe people.

President Amott, in recognition of her contributions to the history of the Ojibwe people and her support of a new telling of American Indian history for a general audience, I present Brenda Child for the degree of Doctor of Humane Letters.