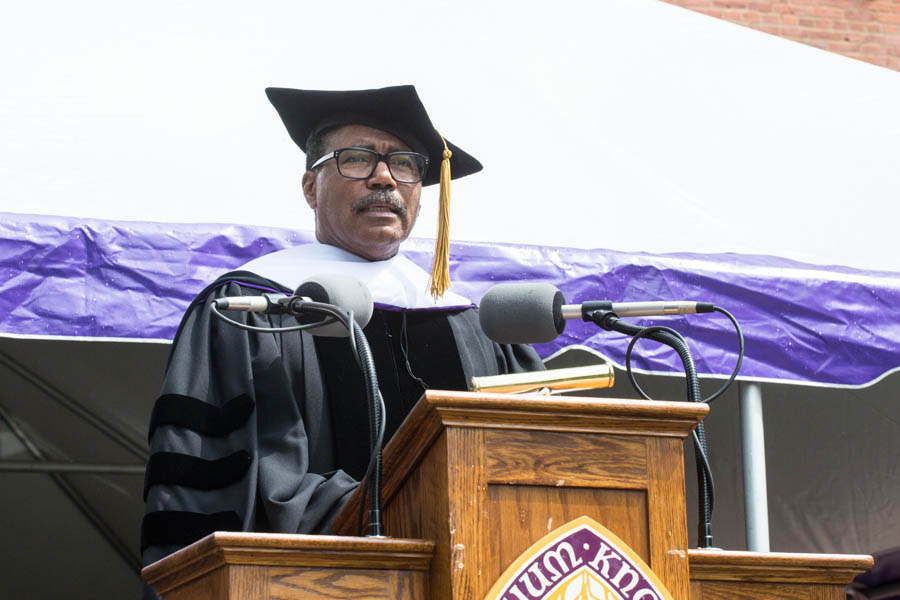 I am honored to present William Thomas Whitaker, Emmy Award-winning journalist and 60 MINUTES correspondent, for the degree of Doctor of Humane Letters.

It's not an exaggeration to say that William Thomas "Bill" Whitaker is at the top of his career. A little over one year ago, it was announced that Mr. Whitaker would leave his long-time post at CBS News in Los Angeles to officially join 60 MINUTES, the nation's most-watched news program, as a correspondent. "It's the dream job for broadcast journalism," he told the Los Angeles Times after the announcement.

"Bill Whitaker is one of the great veterans of CBS News," said Jeff Fager, executive producer of 60 MINUTES. "He has had a distinguished career covering just about every kind of story all over the world."

Mr. Whitaker began his career at CBS News in 1984 as a reporter based in Atlanta, where he covered the 1988 presidential campaign of Michael Dukakis and received an Emmy for his reports on the collapse of Jim and Tammy Bakker's television ministry. He then spent three years as a CBS News Tokyo correspondent, developing an impressive portfolio as a foreign correspondent. His coverage included stories throughout Asia, including the pro-democracy uprising in Tiananmen Square. He was also in Baghdad for the build-up to Desert Storm.

In 1992, Whitaker's career took him to Los Angeles, where he reported regularly for the CBS EVENING NEWS and other CBS News broadcasts, including SUNDAY MORNING, for which he turned out feature stories and thoughtful profiles. His most notable profiles included Barbra Streisand, Norman Lear, Gladys Knight, and Mike Tyson. In other high profile assignments, he interviewed Mexican President Enrique Peña Nieto and covered the funeral of Nelson Mandela, the Fukushima nuclear disaster in Japan, the Haiti earthquake, and the early stages of the war in Afghanistan and Iraq. He followed Mitt Romney's presidential campaign in 2008 and was the lead reporter covering the George W. Bush presidential campaign in 2000. In the spring of 2014, he joined 60 MINUTES, television's most watched news program, and, in his first season, reported on the drug war in Mexico and police shootings in the U.S., among other stories.

Mr. Whitaker graduated from Hobart and William Smith Colleges with a bachelor's degree in American history and from Boston University with a master's degree in African-American studies. He also attended the Master of Journalism program at the University of California, Berkeley.

President Amott, in recognition of his distinguished career as a broadcast journalist, telling the story of our world's most important events and individuals, I present William Thomas Whitaker for the degree of Doctor of Humane Letters.