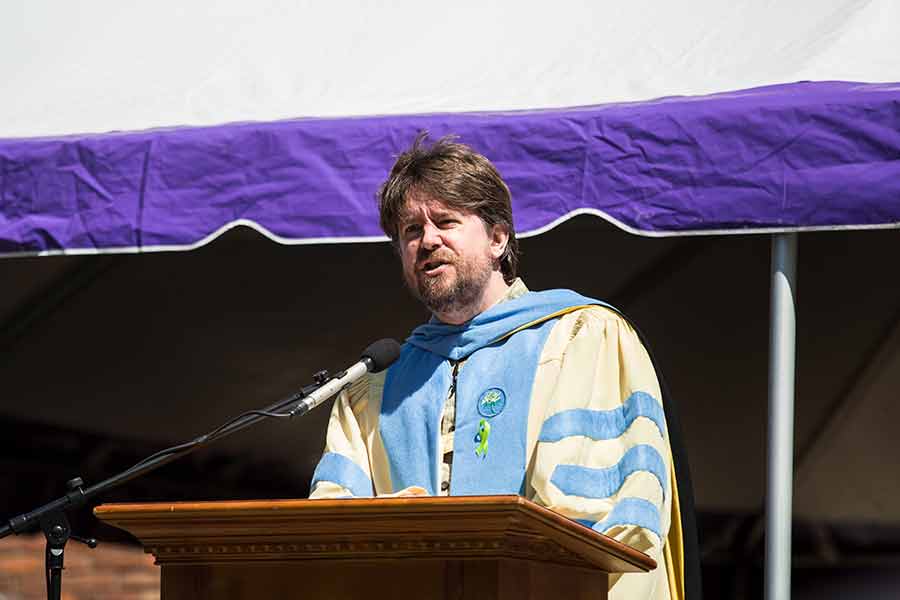 It is my distinct pleasure to announce this year’s winner of the Knox College Faculty Achievement Award. The winner of this prize is chosen by the Faculty Personnel Committee, an elected faculty body, from nominations provided by the faculty. The award recognizes extraordinary accomplishments in teaching, research or creative activity, and service. This year’s winner is being recognized for excellence for all of these areas. If a measure of a scholar can be found in the frequency in which his or her work is referenced by others, then professor of psychology Tim Kasser is the most eminent scholar in the history of Knox College.

Since joining the Knox faculty in 1995, Tim’s almost 100 publications, including four books, have been cited approximately 14,000 times according to Google Scholar, and his book The High Price of Materialism, received the Choice award as the Outstanding Academic Book of 2002. He has spoken at almost 50 different colleges and universities, as well as more than 100 venues around the world. His work has also reached the average person on the street, as it is regularly featured in popular media outlets such as the New York Times, Wall Street Journal and Time magazine.

Professor Kasser has also been an innovative and inspirational teacher. In addition to teaching the standard courses that one might find in any psychology curriculum, he has developed a range of popular and unusual offerings such as "Dying and Death," "Dreaming," "the Study of the Person," and "Alternatives to Consumerism." His impact on students was reflected by his receiving the Philip Green Wright Lombard College Prize for Excellence in Teaching in 2000.

Professor Kasser has been an outstanding citizen in the Knox community and the world beyond, spearheading campus sustainability efforts, chairing the psychology department, and even organizing an impromptu weekly music ensemble for faculty seeking a momentary escape from their academic pressures. He is also recognized by his departmental colleagues as the driving force behind many curricular and policy initiatives in the psychology department over the past 20 years.

Tim’s activism extends beyond the Knox campus borders as he serves on the boards of organizations such as the Campaign for a Commercial-Free Childhood and the Center for a New American Dream. His work around the world with nonprofit organizations devoted to the enhancement of human wellbeing to education about the downsides of materialistic values, reflects a passion that shows no sign of slowing down anytime soon.

And in fact, due to his participation in yet another conference this weekend, Professor Kasser is out of town and unable to be here today to receive the award in person. Nevertheless, please join me in congratulating him in absentia.