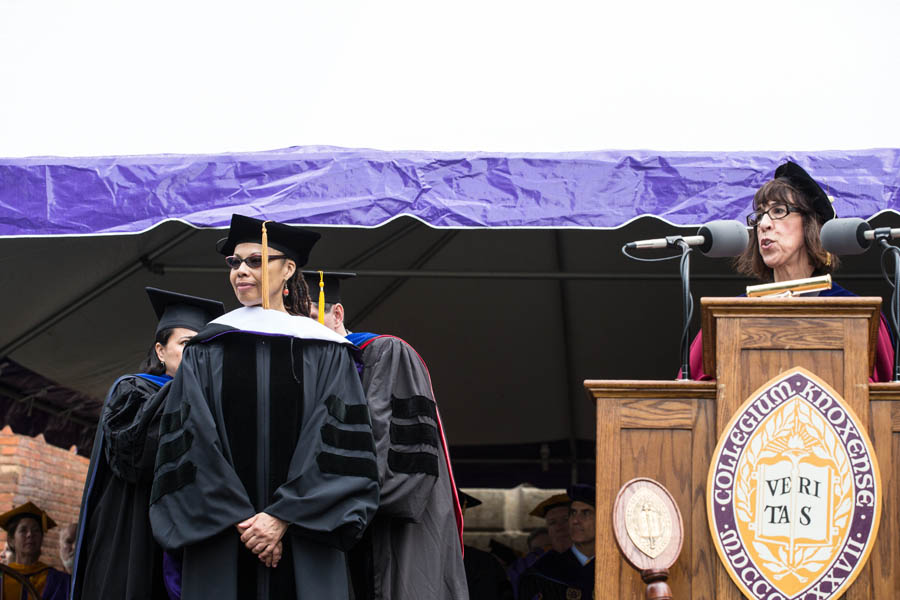 I am honored to present June Victoria Cross, Emmy Award-winning producer and writer and professor at Columbia University's Graduate School of Journalism, for the degree of Doctor of Humane Letters.

June Victoria Cross was born as the Civil Rights movement began and came of age during the turbulent tide of the Vietnam War and the Black Power movement. The daughter of an aspiring white actress and black vaudeville entertainer, her own personal experience navigating, as she describes, "the razor blades of race," informed her more than 30 years of television news and documentary experience. A two-time Emmy Award winner, she has reported on the defense industry, the Middle East, and the intersection of poverty, politics, and race in the U.S. and in Haiti and completed eight documentaries for PBS's Frontline. She also worked as a producer for the MacNeil/Lehrer NewsHour, as well as CBS News. She received her first Emmy in 1983, for Outstanding Coverage of a Single Breaking News Story, for her NewsHour reporting of the U.S. invasion of Grenada.

Ms. Cross is best known for her autobiographical documentary Secret Daughter, a film that examined how race and color had affected her family and for which she received her second Emmy in 1997. Secret Daughter was also honored that same year with a DuPont-Columbia Award for Excellence in Broadcast Journalism. In 2006, she published her memoir Secret Daughter: A Mixed Race Daughter and the Mother Who Gave Her Away, based upon the Emmy-winning documentary, which explored her upbringing in greater detail. She describes it as "a story about the strength it takes to keep a secret and the courage required to reveal it."

In addition to her work for Frontline and the NewsHour, Cross was an executive producer for This Far by Faith, a six-part PBS series on the African-American religious experience that was broadcast in 2003. She just completed a film about HIV in rural America, Wilhemina's War.

Ms. Cross received her B.A. from Harvard University in 1975. Five years ago, she founded a program in documentary filmmaking at Columbia University's Graduate School of Journalism, where she is currently a tenured professor. She was a fellow at Carnegie-Mellon University's School of Urban and Public Affairs and at Harvard University's W.E.B. DuBois Institute for Afro-American Studies. In addition, Ms. Cross is a member of the National Association of Black Journalists, Investigative Reporters and Editors, the Black Documentary Collective, the Council on Foreign Relations, and Phi Beta Kappa.

President Amott, in recognition of her award-winning work documenting the multitude of stories that define the American experience, I present June Victoria Cross for the degree of Doctor of Humane Letters.