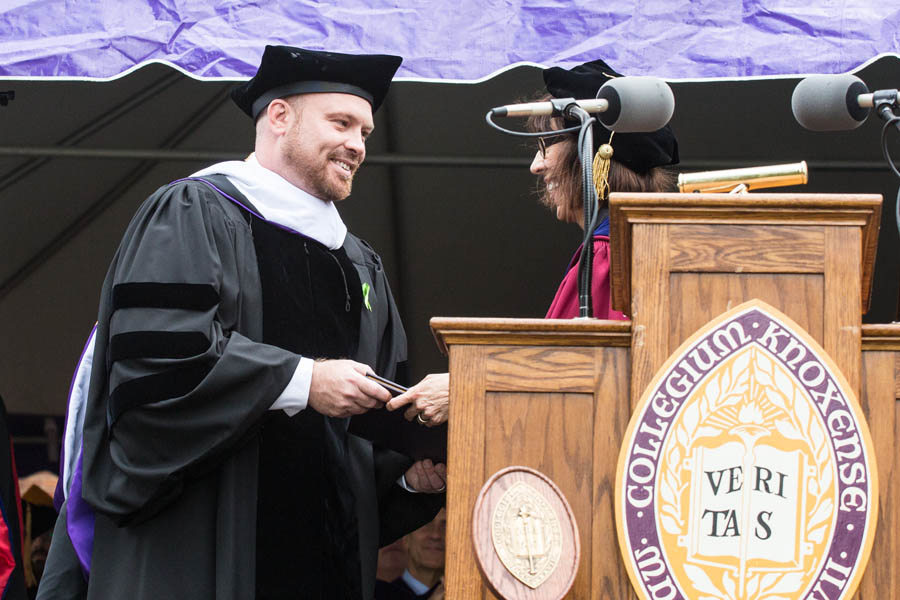 I am honored to present Matthew Berg, co-founder and chief executive officer of the social enterprise technology company Ona, for the degree of Doctor of Humane Letters.

Matthew Berg always knew exactly what he wanted to do with his life--use technology to help developing regions in Africa. Born in Cameroon, he grew up in Senegal before his family settled in Springfield, Illinois, where his parents still live. Yet Africa remained--and remains--a large part of his life. When he chose to attend Knox College, he did so because of the opportunities the College offered for him to pursue his passion. He double-majored in computer science and integrated international studies, studied abroad in Zimbabwe, and completed an Honors project about technology in Africa.

After graduating from Knox in 2000, Mr. Berg received his MBA in international management from the Thunderbird School of Global Management before working for several years at Web startups. He then served as a volunteer for Geekcorps, a non-profit organization working to expand Internet use in emerging nations, becoming Geekcorps' Mali country director and helping to create the Last Mile Initiative, a USAID pilot program to bring basic information and communication technologies services to rural African villages. For his work, Mr. Berg earned a Tech Museum Laureate Award in 2006, and was featured in CNN's Business 2.0, Make magazine, and in the book WorldChanging.

He next served as the information and communications technologies coordinator for the Millennium Villages Project at Columbia University. During his time at Columbia, he oversaw the use of technology to help achieve the United Nations Millennium Development goals in rural areas of Sub-Saharan Africa, including the development of ChildCount+, a health monitoring system in Africa that led to reductions in child mortality rates. That work earned him a spot on Time magazine's "100 Most Influential People in the World" list for 2010.

Today, Mr. Berg continues to tackle some of the world's toughest and most complex challenges through the use of technology. He is co-founder and chief executive officer of Ona, a company that assists non-governmental organizations and other groups with data collection and analysis. Ona, which has offices in Nairobi, Kenya, and New York, has served clients that include UNICEF, the World Bank, and the World Health Organization. One of Ona's recent projects involved collaborating with the World Health Organization on responding to the Ebola crisis by developing smartphone technology that helped bring the Ebola crisis under control.

"The tools we build help provide the information critical for making better-informed decisions that hopefully lead to more people living better lives," he says of his work. "We help empower others to make a difference."

In addition to his recognition from Time magazine, Mr. Berg is a PopTech! Social Innovation Fellow and a 2010 recipient of Knox's Young Alumni Achievement Award.

President Amott, in recognition of his work using technology to address Africa's most pressing issues and to empower people in developing regions to live healthier lives, I present Matthew Berg for the degree of Doctor of Humane Letters.