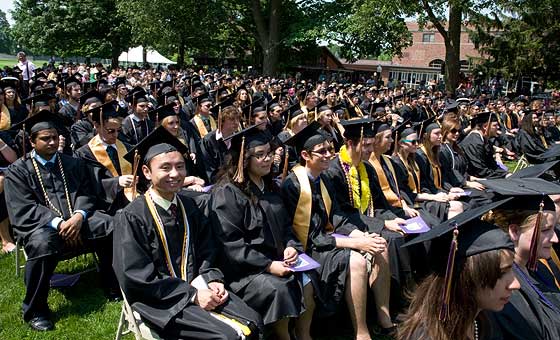 Knox College conducted its 166th Commencement exercises on Saturday on the South Lawn of Old Main, where Commencement speaker Majora Carter told more than 300 graduating seniors they should "believe anything is possible."

Watch videos of the Commencement speeches.

Trustee John D. Podesta '71 introduced Carter, saying: "The movement that she helped create -- empowering people to live healthier, more meaningful and abundant lives -- is central to the vision and aspiration of Knox College."

"Now is the time that demands your creativity," said Carter, an eco-entrepreneur who runs her own consulting firm, Majora Carter Group, L.L.C., and hosts the Peabody Award-winning radio series The Promised Land. "This is a time that literally demands for people like you...to believe that anything is possible."

Trustee Charles F. Smith '84 introduced honorary degree recipient Kate Maehr , chief executive officer of the Greater Chicago Food Depository, Chicago's food bank. Smith said Maehr's life "serves as a shining example" of how a liberal arts education can prepare someone for a lifetime of serving others. After the Commencement ceremony, she told a news conference that hunger affects people across the state, and she feels optimistic that today's graduates will play roles in the battle against hunger.

The proud relatives and friends of the new Knox graduates included Ann and Dermot Manning of London, England, who arrived at 7:50 a.m. to stake out seats beneath a shady tree. They were at Knox to watch their daughter, Catherine, who majored in international relations and history, pick up her diploma.

Another parent, Janice Spataro, who with her family was getting ready to watch daughter Alison cross the stage, said she had mixed feelings about the occasion. "I'm very proud of her and sad at the same time because I know she'll be sad to be leaving. She's loved her Knox experience."