Transcript of remarks to graduating seniors at Knox College, June 7, 2008

I want to begin by thanking you for the invitation to be here and for the honorary degree.

I am sure I speak for my fellow honorees in saying how grateful we are.

As the class of 2008 could testify, a degree is a precious thing -- satisfying to work hard for and earn.

But it's a special delight to receive one without having to attend a single class.

To the parents who are here, let me say that I have three daughters who graduated from college.

And, if you are like me, your emotions this morning are mixed.

You feel both incredibly proud and a little bit sad; excited that this day has finally come and yet astonished at how short the interval is -- between diapers and diplomas.

To the alumni, this is a day that brings back memories of our own college years, which in my case occurred roughly half way between the invention of the handheld BlackBerry -- and the discovery of fire.

But today is, above all, a day to honor and congratulate the class of 2008.

For each of you, this is a moment for celebration, for looking back and admitting that all the studying and cramming before tests was worth it.

In future years, you will recall your commencement and this date with fondness, even as you realize that today is when you first began to forget everything you learned in college.

But as the names of dead European kings begin to fade, the full value of your time here at Knox will become evident.

This matters, because beginning tomorrow, you will no longer have professors to tell you how you are doing and where you stand.

You will rely, instead, on an inner compass; and whether that compass is true will determine whether you are blown about by every breeze; or able to chart a course that reflects the full measure of your talents and the highest calling of your hearts.

This morning, I do not intend to place the weight of the world upon your shoulders, for that will always be your parents' job.

But I do have a few observations to make about Knox College and about the choices you will face as you begin a new and exciting chapter in your lives.

As most of you are aware, Galesburg was witness to an historic debate between Abraham Lincoln and Stephen Douglas.

The time was 150 years ago; the focus was slavery.

Mr. Douglas said he didn't care whether slavery continued or not; the important thing was national unity.

He said we should be practical and compromise.

Slavery was an abomination.

As for national unity, Lincoln didn't believe America could remain united around a lie.

He refused to accept the argument that slavery reflected God's will or the natural order of things.

He drew a clear distinction between right and wrong.

From our vantage point many years later, the evil of slavery seems obvious.

But at the time, those who denied that truth were powerful enough to break America in half.

Of course, this was not the 19th century's only contentious issue.

In 1840, Lucretia Mott and Elizabeth Cady Stanton met while attending an anti-slavery convention in London.

Because of their gender, they were not allowed to actually participate in the conference, but they were still inspired to organize a gathering of their own.

The women of Galesburg organized themselves to support the abolitionist movement.

At Seneca Falls, women, too, argued in support of human dignity and against what many considered to be God's will and the natural order of things.

They too, had the courage to draw a clear distinction between right and wrong.

And here again, from our vantage point many years later, discrimination against women seems obviously unfair.

Yet, the principles articulated at Seneca Falls and at Galesburg are still in the process of being implemented.

It was not until this election campaign that we had a truly serious woman candidate for president of the United States.

Just as it will not be until this summer that a major party will nominate to that high office a person of African-American heritage who is also a former commencement speaker at Knox College.

For some, this rivalry between a daughter of Illinois and the junior senator from Illinois has been an ordeal; I see it as cause for celebration.

Their historic campaigns show that our democracy continues to mature, albeit slowly and with many miles still to go.

To the enduring credit of this college, it has been far ahead of its times in fighting slavery and discrimination, honoring diversity and pursuing truth.

From the outset, there has been a moral aspect to a Knox education -- and that trait has carried over to the twenty-first century.

Today, your student body is drawn from countries across the globe and you are each encouraged to spend time learning from those of different cultures and backgrounds.

You are proud of your traditions but are focused naturally enough on the issues of today and the challenges to come.

You may well wonder whether there are subjects being debated now about which future generations will ask: Why were they ever in doubt?

Just as we ask how slavery could ever be defended our descendants may have questions of their own.

For example, why, in the midst of miraculous scientific gains, did we allow such a divide to develop between rich and poor in our own country and overseas?

Why, with the memory of Bosnia and Rwanda fresh in our minds, didn't we do more, earlier, to stop genocide in Darfur?

Why, in the face of overwhelming scientific evidence, have we still not acted to safeguard our global environment?

And why, in the name of common sense, didn't we understand that the best way to defeat terrorists and protect our security is to remain true to our own principles?

If history teaches anything, it is not that wisdom is beyond our reach;it is that we fail to act on the knowledge we have.

Like Stephen Douglas, we look for temporary solutions and search for the easy way out.

And we are very good at finding words to justify our failures:

All too often, we see injustice and think it safer to do nothing than fight for truth; simpler to allow others to point the way than to blaze our own path.

If you ever took biology, you might have learned about a species of tadpole that always moves together as a group.

This instinct is driven by the creature's microscopic brain.

When scientists lobotomized one, it began darting about on its own.

And naturally, all the others followed.

This combination of herd instinct and lobotomized leadership is no great problem when confined to amphibians.

But with humans, it's a different story.

And so, let me say to the class of 2008: If your faculty has done its job and I'm sure it has -- you will leave here with a gift far more valuable than knowledge -- and that is the determination and confidence to think for yourselves.

As graduates of Knox College, you will not be satisfied with excuses where action is needed, or half-baked compromises where justice is required.

You will greet every easy answer with a question, every glib assumption with a challenge, and every example of complacency with a burning passion to solve hard problems.

Although slow to judge, you will not flinch when the time comes to draw clear distinctions between right and wrong.

And you will fight bigotry of all kinds both around you -- and more important still -- in the reflexes and recesses of your own minds.

When Abraham Lincoln issued the Emancipation Proclamation, he said that "the dogmas of the past are inadequate. As our case is new, so we must think anew, and act anew."

Heed that lesson, and you will have all the ammunition you need to prevail in the battle of ideas.

You will have the courage to confront the axis of evil arrogance, ignorance and hate.

And you will have the wisdom to recognize the best in others while always demanding the best from yourselves.

In so doing, you will earn the highest grade on the test that really matters.

And you will make your parents and loved ones even prouder than they are at this moment.

To every member of the class of 2008; I say again congratulations and thank you for allowing me to share with you this wonderful day. 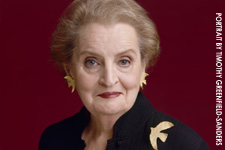