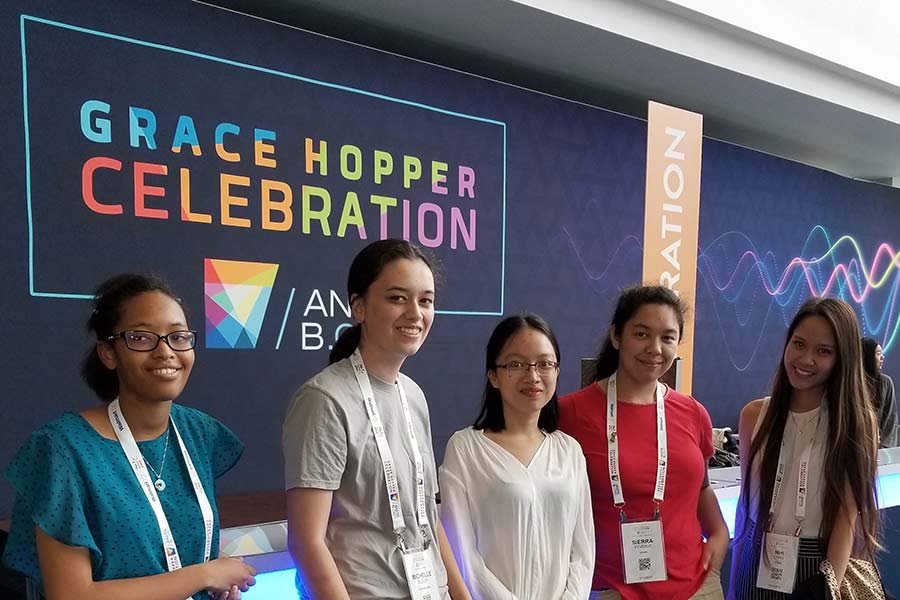 The WiCS club, recognized last year as an official student chapter by the Association for Computing Machinery's Council on Women in Computing (also known as ACM-W), aims to provide education, networking, support, and resources for women considering careers in a computing field. As an ACM-W student chapter, club members benefit from additional opportunities such as resources for speakers, potential scholarships to attend and seed money to fund club activities.

“While we encourage networking and community building in the classroom and beyond, the Women in Computer Science Club provides another source for women to build on their existing skills,” said Monica McGill, associate professor of computer science and faculty advisor of the club. “The club serves as an environment where students of all backgrounds can meet and discuss issues unique to women in the tech industry.”

McGill, who started teaching at Knox in 2017, was drawn to the College’s potential in bringing more underrepresented students to the field of computer science. She introduced the idea of starting a WiCS chapter at Knox and brought together the students currently in the club.

To Cung, Professor McGill’s addition to the computer science department and the consequent formation of the WiCS club have given her a greater understanding of the opportunities available to her.

“When Professor McGill joined the department and contacted some of us to start a WiCS student chapter at Knox, the information she was giving us really started to give me a bigger picture of how the industry is," said Cung. "I know now that there is support for us out there if we need it.”

In the fall, members of the club attended their first conference in Houston, Texas. Organized by ACM-W, the Grace Hopper Celebration of Women in Computing is the largest gathering of women technologists in the world.

Ellie Poley '10, a computer science major who worked at Adobe after Knox and then went on to teach software development at Dev Bootcamp in Chicago, attended her first Grace Hopper Conference several years into her professional career. "If this could have such a visceral impact on me, as someone who was further along in her career, I tried to imagine how it would have felt to attend when I was a student," says Poley, who started a fund to support students' attendance at the conference.

The celebration offered opportunities to network with other students and professionals in the industry as well as to learn about new and exciting advances in technology from industry professionals and academics. As Professor McGill intended, the celebration showed Knox women what it means to be part of a larger community that looks like them.

As someone new to the world of coding, Syverud said that seeing another female in her computer science classes was something of a rarity. "It was wonderful and empowering to see so many accomplished women in this field at Grace Hopper.”

Cung remarked on the sheer scale of the conference and the many inspiring people she was fortunate enough to meet. She realized that while there were many people like her on this journey, there were also many who were willing to help her along the way. “I have more realistic goals now that I have a better sense of the opportunities available in the industry and the resources available to me,” she said.

Cung and the other members of the WiCS executive board have started reaching out to other women interested in computer science. As a club, they hope to engage in projects with their members, learn more about computer science from each other, and consider the opportunities that the tech industry has for them.

“The goal,” Cung said, “is to make it so that more women see computer science as a welcoming field.”

The Department of Computer Science recently received a $10,000 Learning Circle Gift from the National Center for Women & Information Technology (NCWIT). The funds will be put towards efforts to increase the number and percentage of women and other underrepresented minorities seeking to study computer science.