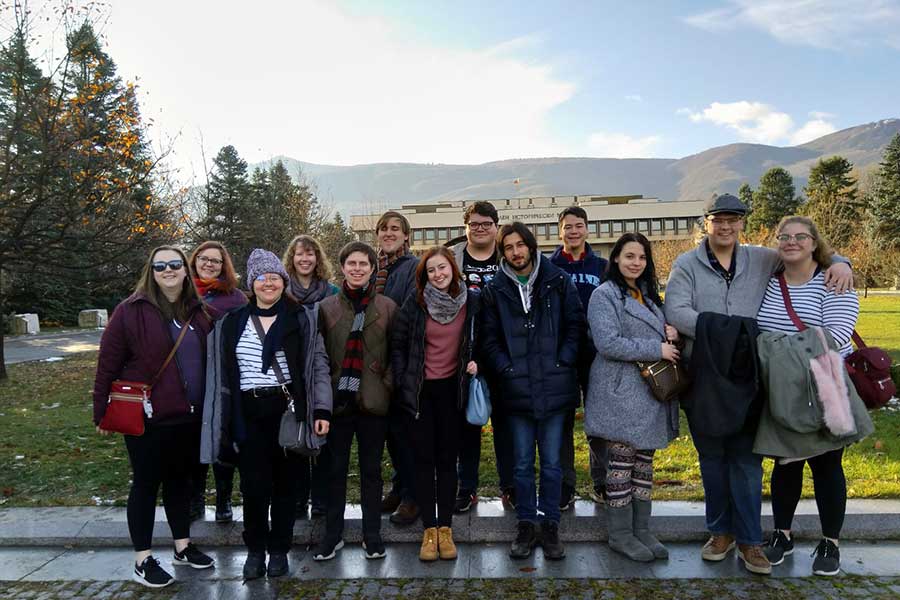 Andrew Liput hopes eventually to work in government—specifically, the United States Foreign Service—and the Knox College junior believes that a recent trip to Bulgaria is helping him move closer to that goal.

The winter break trip was a short-term immersion experience that served as an extension of a fall term political science course, Russian and East European Politics, taught by Assistant Professor of Political Science and International Relations Katie Stewart.

“I would potentially be interested in working in the region,” said Liput, who is majoring in international relations. “Obviously, with the Foreign Service, you don’t know where you’re going to work, but having expertise in a region is incredibly valuable. I think this program has helped to give me that, but it also educated me on the pathways that I have open to me, in terms of achieving a career in the Foreign Service.”

During the trip, he learned more about options he might want to pursue after graduation, such as applying for a Fulbright fellowship to teach English in Bulgaria, that would strengthen his qualifications for working in the Foreign Service.

Stewart, Assistant Professor of Classics Hilary Lehmann, and 11 students traveled throughout Bulgaria from December 4 to December 14, 2019.

The trip enabled students “to immerse themselves in a post-communist society, learn about its complex history, and see how this history influences contemporary political and social life.” Stewart said. “There was something for everyone on the trip—politics, religion, art, history, culture, food, and more. Bulgaria has a long and layered past of alternating occupation and independence that its diverse cityscapes and social relations reflect.”

The students who traveled to Bulgaria are completing research projects during the 2020 winter term. Liput, for instance, is examining Bulgarian foreign policy with the Republic of North Macedonia.

“Combining what they learned and observed in the country with secondary academic research, the students are answering questions that they were left wondering about after the trip,” Stewart said. “The topics range from ethnic relations to architectural styles to the treatment of religion under different regimes.”

Liput said that studying Eastern Europe in the classroom and then traveling to Bulgaria was “invaluable.”

“Knox has the Power of Experience grant, but it also has experiential learning, which is a requirement that students can’t just graduate Knox by [only] attending classes. You actually have to go out and do something and experience something to be able to qualify yourself as someone who holds a Knox degree, who’s been educated at Knox,” he explained.

“This program helps fill that [requirement] in probably the best way possible, because it takes ideas and concepts that are discussed in the classroom and shows you the full extent of how those ideas exist in the real world. I would not understand nearly as well the politics of Bulgaria if I hadn’t gone there and talked to people.”

The students who went on the trip were: