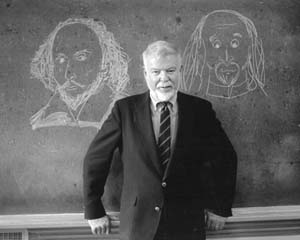 A memorial service for Professor Emeritus of English William E. Brady, who died March 9 at his home in Galesburg, was held in Kresge Hall on Sunday, June 8. More than 150 Knox faculty, staff, alumni, and friends, as well as members of Professor Brady's family, attended the moving service.

Beginning with a slide show of photos set to poetry readings by Professor Brady, the service featured tributes from Brady's colleagues in the English department and concluded with memories from friends and family in the audience. It was a true celebration of one of Knox's most beloved professors.

"Professor Brady was a memorable figure on campus during his active teaching from 1962 until 1994 and beyond," said Knox College President Roger Taylor. "Generations of students remember not just how well he taught Shakespeare but also the remarkable panache he displayed in the classroom and in his friendships with faculty, students, and graduates. His booming eloquence will be missed."

Brady showed "enthusiasm for students, for Shakespeare, for learned discourse, and for shared intellectual activity that transcended the classroom... enriching their and our lives," wrote the Dean of the College, John Strassburger, in a report to campus on the occasion of Brady's retirement from full-time teaching in 1994-95.

Brady taught Shakespeare, Renaissance literature and modern fiction. For many years, he led an annual celebration of Shakespeare's birthday, in which students and faculty performed scenes from Shakespeare's plays.

The English department, Knox alumni, and the family and friends of Professor Brady recently established the William E. Brady Fund in English Literature, which will honor each year the senior literature major with the best performance in senior seminar. Donate to the Brady fund.

After graduating from Newark Academy in Newark, New Jersey, in 1942, Bill enlisted in the United States Navy, finishing with an honorable discharge in August, 1946. He completed his undergraduate education at Hobart and William Smith Colleges in Geneva, New York, where he also taught for two years. Later he served his Alma Mater with distinction as Alumnus Trustee, from 1966 to 1971, and as class correspondent for 10 years. For these and numerous other services to the college, he was awarded an Alumni Association Citation for exceptional and distinguished service to Hobart and the Association.

Bill received his Master's Degree and Ph.D. from Brown University and taught there during his years as a graduate student. He spent a year at Corpus Christi College, Oxford while completing his dissertation. He then moved to the College of the University of Chicago as Assistant Professor where he taught from 1957 to 1962. He also participated in the 1971 summer program at Colorado College as lecturer in art.

Bill's primary career, however, was at Knox College in Galesburg, where he taught from 1962 until he retired in 1995. During those years his principal focus was on the works of William Shakespeare for which many generations of students remember him with admiration and affection. Additionally, he taught English and American literature, Renaissance literature and occasionally philosophy, history, the murder mystery genre and other more esoteric topics.

During his years at Knox Bill chaired the Publications, Personnel, Executive and Curriculum Committees and was twice Chairman of the English Department. From 1984-1987 he served as Faculty Secretary. For these and numerous other services, he was honored with the Knox College Burlington Northern Faculty Achievement award in 1988. This prize is granted for superior scholarship and excellence in classroom teaching.

Bill loved his family wholeheartedly, and took the utmost delight in its unity. He worked hard at getting his wife and children together as often as possible for fun, contact and cheer. Furthermore, he was a steadfast optimist with a wonderful sense of humor and a passion for life. Among many other activities, he loved to travel and to enjoy the rich cultures, histories and cuisines of the places where he and Syd visited together. His most favorite pastime, however, was reading. He spent much of his time engaged with books of all kinds, usually several at a time. In fact, his great fondness for reading was ultimately reflected in his final words, "The New York Times."

Memorials may be made to Knox College, Hobart and William Smith Colleges and Brown University.

From the Memorial Service on June 8, 2008:
Listen to Bill Brady read:
Ode On a Grecian Urn
As I Walked Out One Evening

Listen to the English Department Singing:
"Tis The Old Ship of Zion"