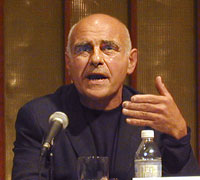 Robert Borzello speaking at 2003 campus conference on ethics in journalism.

In an unusual convergence of generosity, Knox College has received two gifts to support acquisition and renovation of a new campus building -- one from alumnus Bob Borzello, now living in Great Britain, and one from local Galesburg businessman, Donald Fike.

The former RFMS building at 115 E. South Street, Galesburg, will be named Borzello Hall in honor of Borzello, a 1958 Knox graduate, noted for his promotion of ethics in media in Great Britain. Borzello donated $300,000 to the College to purchase the building and pay for its renovation. The College purchased the building from Donald Fike the end of 2007 at a substantial discount from its appraised value, resulting in a gift to Knox of $150,000.

"Knox sought advice from the Knox Business Advisory Council about ways to accommodate enrollment growth. They suggested approaching Don Fike about adding his building to the Knox campus," said Knox College President Roger Taylor. "I put out a call to alumni regarding the opportunity at hand, and Bob was the first one to call." Borzello Hall will house the College's journalism program, a classroom, offices for faculty in modern languages and history, and Knox's public relations office. 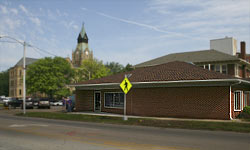 "Knox also is grateful to Donald Fike," Taylor said. "Don's generosity allowed us to take a general office building and enhance it into dedicated, and much needed, space for teaching and learning."

The College will begin using Borzello Hall this summer and will formally dedicate the building on October 31, 2008 during Knox's Homecoming Weekend.

In addition to the gift for the building and renovation, Borzello has also established a fund supporting the journalism program at Knox.

Borzello graduated from Knox in 1958 with a bachelor of arts degree in history. After graduation, Borzello, who grew up in Oak Park, Illinois, returned to Chicago to pursue graduate studies first at Roosevelt University, and then at the London School of Economics in England. Upon his return to Chicago from England, he managed and edited one of the first American "supermarket tabloids." He returned to London in 1966 and has lived there since then. In the UK, Borzello founded and managed a graphics arts company, Camden Graphics Ltd; a book publisher, Camden Press Ltd; and Camden Trust, a charity supporting educational and social causes.

Borzello is currently a trustee of Media Wise, an independent organization that promotes media ethics and assists individuals who have been harmed by unethical media practices. In 2003 he participated in a panel discussion held at Knox on ethics and reporting.

During the 1980s and early 90s, working through the British Press Council, Borzello campaigned vigorously against racism in the press. He particularly targeted the practice of describing a person's color, race or ethnic origins in a pejorative or prejudicial context when this was not relevant to the story. His campaign is generally credited with bringing this practice to an end in the British press.

Fike is CEO of RFMS Inc., which owns and operates retirement and senior living campuses in Illinois, Iowa, and Nevada.

Founded in 1837, Knox is a national liberal arts college in Galesburg, Illinois, with students from 46 states and 50 nations. Knox's 'Old Main' is a National Historic Landmark and the only building remaining from the 1858 Lincoln-Douglas debates.