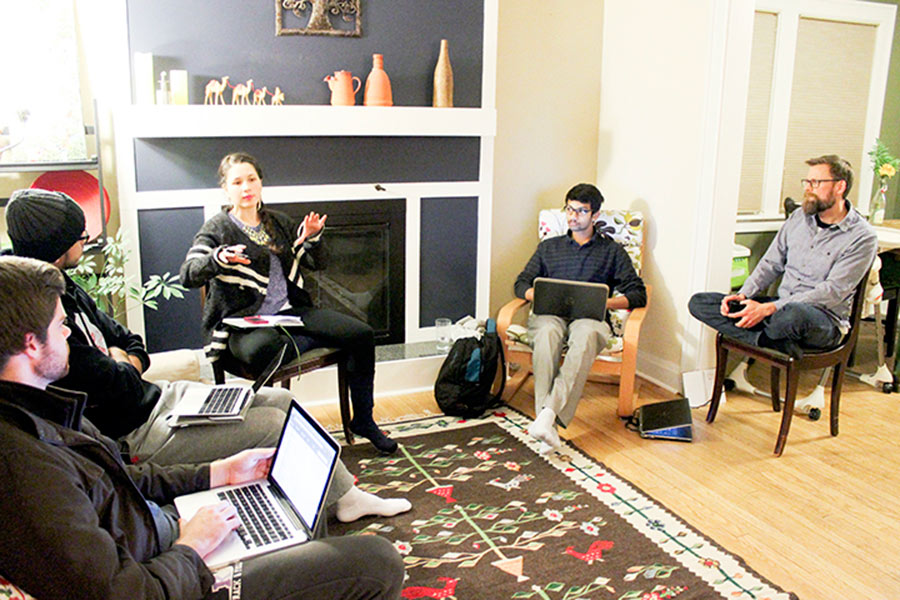 by Ayla Mir '18
Reprinted with permission by The Knox Student

When a devastating earthquake struck Haiti in 2010, Associate Professor of Political Science Daniel Beers decided to do something.

Beers and his wife, Kymber, traveled to Haiti and volunteered with a humanitarian organization in the aftermath of the disaster. The volunteer work made him want to better understand the role international aid organizations were playing in the relief process.

"I saw that [international non-governmental organizations] didn't address the needs of the displaced people," he said. "Instead, it was creating another round of forced displacement."

Now, Beers is putting his research on international aid and reconstruction policy into practice by partnering with an organization in Port-au-Prince on a microfinancing scheme, enlisting Knox students in the process.

Beers focuses on internal displacement, or the 1.5 million people who lost their homes in the 7.0 magnitude earthquake and wound up in displacement camps. The problem, he noticed, was that INGOs weren't creating new housing.

"There have been less than 10,000 new construction sites since the earthquake, and we're talking about over a million people displaced. So where were they going to go?" he said.

In 2014, on his fourth trip back to Haiti, Beers taught a course at the Institute for Social Work and Social Science (ETS). His teaching assistant at the time still lived in a displacement camp five years after the quake. He introduced Beers to the camp and to a civil service organization that was working toward a durable housing solution. The visit inspired Beers to go beyond studying the program academically.

Beers' current project falls under the definition of microfinancing, which involves administering financial services to low-income individuals lacking the access to a formal banking system or service. After carrying out extensive research into the pros and cons of microfinancing, he became interested in the practice of microsavings.

"Instead of issuing a loan and having the recipient pay you back, here you're having the recipient have access to some sort of a bank account where they are saving bit by bit, and we are matching however much they save, every month," he said. "This way, they prioritize saving. It takes a little more time, but they are more invested in it because half the money is theirs."

Beers said in an e-mail that Knox students have been "instrumental" to the project. Senior Rohail Khan helped develop the project's micro-savings model, while Knox alum Anna-Maria Marquez '15 coordinates communications, fundraising, and marketing. The two accompanied Beers to Haiti this December. Post-Baccalaurette Jake Erickson and seniors Srichandra Masabathula and Ian Horne contribute to other aspects of the project including research, budgeting and finance management. The group works in a partnership with an organization called the COPROVACA (Committee of Professionals for the Development of Canaan) on the ground in Haiti.

"The idea is that they are there, on the ground, and can actually see and understand what is needed better than we can, sitting as far away as we are," said Beers.

Funding for this project remains small-scale, with personal donations and possible Knox grants as the main sources. Beers has applied for a Mellon association grant dedicated to a faculty member's research and creative work. He says he has received positive feedback from all involved, both on the ground in Haiti and here at Knox, and is excited to continue working with the Knox community.

"We're learning some of the more unforeseeable details as we go," he said. "It's not something we could have been totally prepared for beforehand. But we want to give it a fair shot."