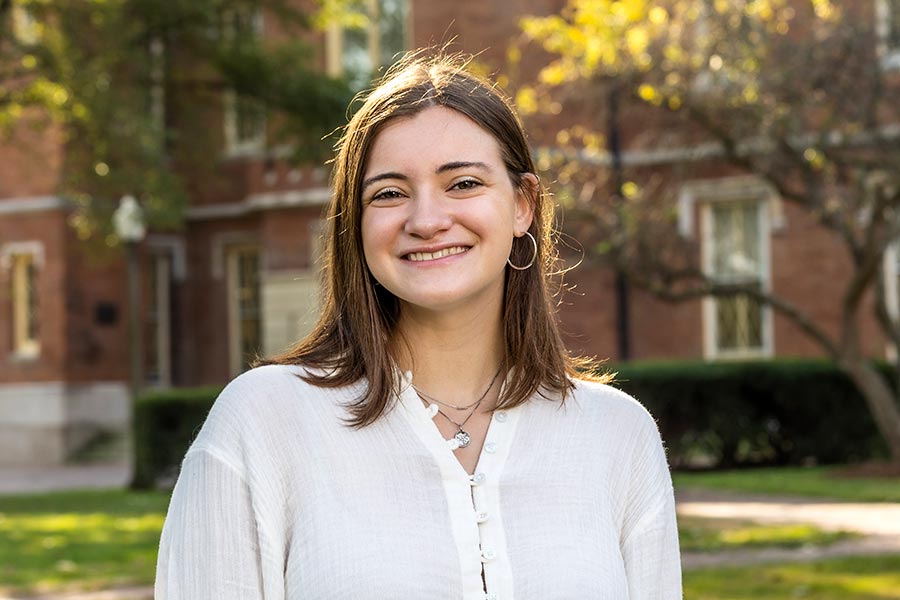 Knox College student Becca Gadiel ‘22 was named a 2021-2022 Student Laureate of the Lincoln Academy of Illinois, an honor that recognizes outstanding college seniors in Illinois. Gadiel, a native of New Buffalo, Michigan, and Chicago, Illinois, is majoring in psychology and minoring in philosophy and social services.

As a first-year, she won the Proctor Fenn Sherwin Prize, which recognizes the best paper written in the First-Year Preceptorial courses. She received the opportunity to participate in ASSET (Artists, Scholars, Scientists, and Entrepreneurs of Tomorrow) with her proposed psychology research project, “The Role of Introspection in Not-Just-Right Experiences.” Gadiel was also selected to join Psi-Chi, the National Honors Society in Psychology, and was inducted into Phi Beta Kappa, the nation’s most prestigious academic honors society. Phi Beta Kappa is usually reserved for seniors, but Gadiel was one of four Knox juniors to be inducted into Phi Beta Kappa last year.

On campus, Gadiel volunteers as a Dare to Care peer educator. She also serves as president of the Jewish Club, Counseling Services peer educator, and a KnoxCorps associate. She is a co-author on a manuscript about substance user identity entitled "Substance User Self-Fit Perception Increases Identification as a Substance User." The manuscript is out of her lab group with Associate Professor of Psychology Andy Hertel and is under revision at a major journal. As a KnoxCorps associate, she spent one year working for the YMCA, and is entering her second year with Court Appointed Special Advocates (CASA) of West Central Illinois.

Gadiel plans to pursue her Master of Social Work degree after graduation from Knox and eventually intends to focus on crisis work or work in a community center. She hopes that all in need will feel more comfortable getting help and realize the importance of taking care of one’s mental health.

The Lincoln Academy inducts one senior annually from each four-year college and university in Illinois, and one student from among the state's community colleges. In addition to designating student laureates, the Lincoln Academy honors distinguished citizens with the state's highest award, the Order of Lincoln.