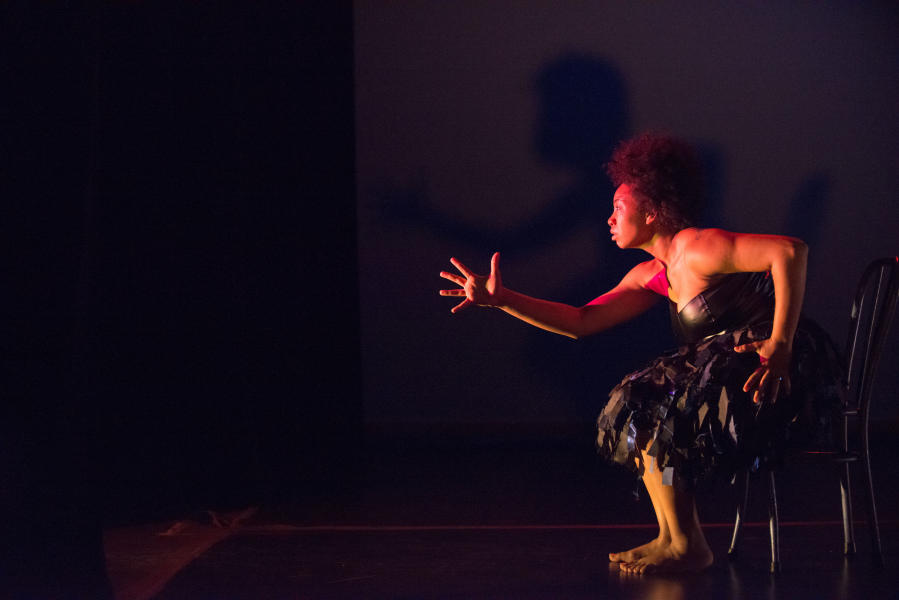 "It was an experience I will never forget and one that I think impacted my career goals and my views on myself as a performer," Angela McNeal '16 said of her recent dance performance at the Kennedy Center for the Performing Arts.

She was one of a select number of collegiate dancers to perform at the Kennedy Center in Washington D.C. as part of the American College Dance Association's National College Dance Festival. Her piece, "The Raven," was choreographed by Knox College faculty member Jennifer Smith, associate professor and chair of dance.

McNeal appeared at the Kennedy Center in June, saying she was incredibly humbled "to perform in a place with so much prominence and significance in such a historically rich town."

"My D.C. experience was one like no other," she added. "I was so overwhelmed with emotions being there. It was a very eye-opening time for me as an artist. Everything was so professional, and that made me feel like I was being treated professionally as an artist and that dance in this manner was taken seriously."

A recent Knox graduate from Oakland, California, McNeal pursued a self-designed major in dance and community engagement and a minor in anthropology and sociology.

Smith originally choreographed "The Raven" in 2009. Adjudicator judges have described it as an "edgy retelling of Poe's 'The Raven'" where the "sophisticated sensuality of the dancer is haunting."

McNeal expressed that getting the opportunity to perform "The Raven" was a dream come true.

"It was like a ballerina getting the lead part in 'Swan Lake.' It's always been a piece of work I looked up to because of its captivating storyline and the intricate movement and character relations seen throughout the piece," said McNeal. "I feel that from now on, ‘The Raven' will always be a part of me."

"The Raven" was one of the first performances that defined McNeal's Knox experience.

"My first introduction to the dance department was when I watched Jennifer Smith perform ['The Raven'] and from that moment, I really loved ‘The Raven.' I wanted her to know that this was more than a dance for me ... it's me thanking her," said McNeal.

McNeal added that this experience further developed her relationship with Smith "both personally and professionally."

"I learned a lot from her and was glad to have had the experience of what it is like to work so closely with a choreographer whose work is well-known and carries some weight in the world of dance," she said.

McNeal looks forward to seeing what doors her Kennedy Center performance may open for the dance community at Knox.

"I was glad to have been the first student to take us this far, but surely I know I won't be the last," she reflected. "I hope that others can see me as an example of inspiration on how they can make their abilities work for them at this institution."

Commencement will be on Sunday, June 7, on the South Lawn of Old Main. It is free and open to the public.

It was a very eye-opening time for me as an artist. -Angela McNeal '16