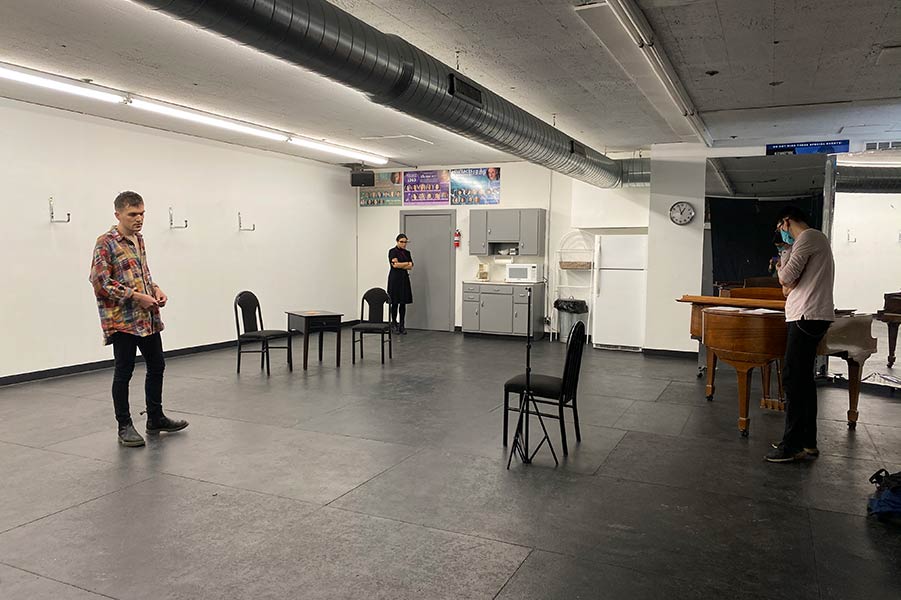 In a large, white rehearsal space in downtown Chicago, Joel Willison ’20 stepped in front of a 360-degree virtual reality camera to introduce the ensuing performance—a digital play entitled Guilt in Reverence. Audience members began tuning in via YouTube; they were able to view the room in its entirety from every angle, allowing them to see the space behind the performers (where the show’s producers looked on in anticipation), as well as the front of the room where the bulk of the performance took place.

Willison, the artistic director and founder of Pocket Theatre VR, came up with the idea for a virtual reality based theatre production company in spring 2020 during his final semester at Knox. The College had just cancelled in-person classes due to the COVID-19 pandemic, creating a multitude of challenges for Willison’s senior thesis for his theatre major. “I was working on Death of a Salesman by Arthur Miller and was really frustrated with not being able to block it or have an in-person audience,” Willison said. “I thought the idea would work so I bounced the idea around to a bunch of friends.”

The response was overwhelmingly positive, with some theatre students even expressing interest in participating in the project. “All the team members in Pocket Theatre VR are from conversations with friends from Knox,” Willison said. “At that point, I had told so many people about the idea that I was more worried about not doing it. We bought the VR camera while finishing up our senior year.”

Pocket Theatre VR’s director of marketing, Theresa Murphy ’17, was one of the first students to join the team. “Joel was so excited to talk about his new theatre company,” Murphy said. “I had a lot of ideas to share, and I realized that I wanted to make my ideas a reality.”

For Murphy, exploring theatre through virtual reality was an entirely new experience—with plenty of obstacles and opportunities. “I love being immersed in the play through VR, much like I am in person,” Murphy said. “The ability to look around the space offers a unique function that many virtual platforms cannot provide. VR is a new challenge for our team when it comes to directing, technical aspects, and more; it offers new, exciting obstacles that we get to overcome.”

As Willison explained, taking on these obstacles allows the Pocket Theatre VR team to adhere to their shared values—namely, the importance of accessibility. “VR and how we're approaching our theatre is focused on opening our doors to as many people as possible,” he said. “Anyone who has access to the internet can watch our shows for free and have more control over their experience than [they would watching] a Zoom play or prerecorded play. Imagine if everyone had the best seats in the house and could watch from anywhere in the world.”

Literary manager and lighting consultant Marion Frank ’22 echoed this sentiment, emphasizing Pocket Theatre VR’s mission to produce accessible theatre that amplifies issues of social justice. “We created this group not only to continue to create theatre during a pandemic, but also as a response to the human rights injustices we saw over the summer,” she said. “We saw how theatre specifically perpetuated white supremacy in America. There are too many barriers preventing people from participating in theatre, and we seek to eliminate those.”

Frank—the only member of the team who is a current Knox student—added that this mission dictates whether or not the team decides to pursue a given project. Guilt in Reverence, a play about two lovers of the same man bonding in grief over his death, deals with issues of suicide and sexual identity. Previous Pocket Theatre VR productions have dealt with topics like racial injustice, poverty, and police brutality.

“We also consider cast size, the length of the play, and how well we think it will work in VR,” she said. Despite casting and cost constraints, the company is building on their productions, with Guilt in Reverence being their first production that used a rented performance space. “With each production, we find ways to come a little closer to a more fully realized production.”

Adapting to these constraints hasn’t been easy, but as Willison explained, his experiences at Knox provided him with a foundation for experimentation, growth, and success in theatre production. “Being on The Knox Theatre Advisory Board had a huge impact on me for my professional development,” he said. “I was able to learn more about how to organize theatre, instead of just performing and creating.”

He also emphasized his experience as the co-coordinator for Knox Theatre’s New Plays Workshop and his experience adapting those productions for a virtual setting in spring 2020. “It was invigorating to realize the virtual space we were creating was helping welcome students to write and submit plays,” Willlison said. “I wouldn't feel comfortable being the artistic director of Pocket Theatre VR if it wasn't for my time working on New Plays Workshop.”

Guilt in Reverence was written by John Mabey and directed by Joel Willison ’20. Watch the full performance for free on YouTube.

Ten Galesburg eighth-graders are selected for the program, which helps them succeed in high school and offers free college tuition.