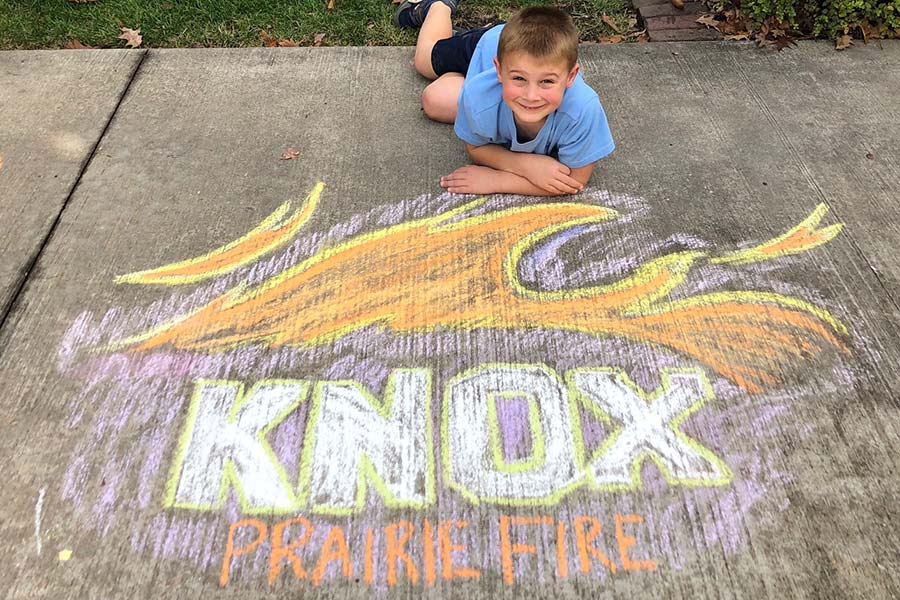 With the number of campus visitors strictly limited, fall sports—including football and soccer—postponed, and many alumni observing strict physical distancing protocols in their local communities, it was clear that Knox’s 100th Homecoming—dubbed "Stay-in-Your-Own-Home(coming)"—was not going to look like its typical celebration.

Thankfully, it takes more than a global pandemic to stop a 100-year-old tradition. Over the course of three days, hundreds of alumni and friends sat down in front of their laptops and smartphones to come home to Knox virtually—taking part in 70 live events from Thursday to Sunday, including video reunions and online classes. Between live events, such as a student panel discussion about what it’s like to live and learn at Knox during the pandemic, participants were able to watch student-led video tours of the newest spaces on campus and hear from alumni winners of the Knox Service Awards and Scroll of Honor Awards. Participants could even take a virtual jog through campus and downtown Galesburg in lieu of the usual Saturday morning 5K.

Though there were no current Prairie Fire student-athletes to cheer on in competition, athletics were still an important part of the weekend. On campus, K Club and the Knox Student-Athlete Advisory Committee (SAAC) sponsored a sidewalk-chalking competition that drew entries both from current students and from faculty and staff families. Online, participants enjoyed hearing from the four newest members of the Knox-Lombard Athletic Hall of Fame: former Knox Volleyball captain Mary Groll ’92, Knox Football kicker and track letterwinner Joe Metzka ’96, Knox Basketball and Knox Track and Field record-setter Michael Smith ’96, and Knox Football’s Derek Mortensen ’14, who finished his career as Knox’s all-time leading rusher.

With so many events scheduled, some alumni had difficulty choosing which to attend—or deciding which they enjoyed most.

For a wine tasting hosted by Regine Rousseau ’95, sponsored by the Black Alumni Network of Knox College, participants had the opportunity to purchase the featured wines—all from Black-owned vineyards—to sample at home during the discussion. Of course, drinking was entirely optional. “I wasn’t able to order the wines, but I really enjoyed listening in,” said Paul Steenis ’85, Knox’s vice president for enrollment and dean of admission.

Dozens of alumni also participated in a live conversation with legendary Knox coach and former athletics director Harley Knosher. Michael Smith ’96 noted, “It was so wonderful to share even a few moments with Harley.”

Of course, returning to the classroom is always a highlight of Knox Homecoming—and with more courses offered online this term, alumni gained a deeper understanding of what it’s like to be a college student during a pandemic. “It is a real skill to teach a class via Zoom,” observed George Pearce ’76, who sat in on Professor Emily Anderson’s first-year preceptorial course on social justice and social media. “Monitoring the chat room and keeping the class engaged at the same time is quite impressive. Hearing creative minds at work is so rewarding.”

Though the entire Knox community is hoping conditions allow a safe resumption of an on-campus Homecoming in 2021—complete with a double set of Reunion celebrations for classes who reached a milestone year in either 2020 or 2021—there were at least a few alumni who expect virtual meetings will become a new tradition.

Elisabeth Zarnoti ’17, who was grateful to reconnect with fellow members of Alpha Sigma Alpha, said, “The virtual open house was great because we don’t have many alumnae who can afford to come back and visit for Homecoming. It’s so obvious that we should have done events like this before.”

Browse a gallery of screenshots and photos from Homecoming 2020. To share your own, contact Alumni Engagement at engage@knox.edu.

Above: Danny Jezek-Irle lies on the sidewalk beside his chalk rendering of the Knox Prairie Fire logo.