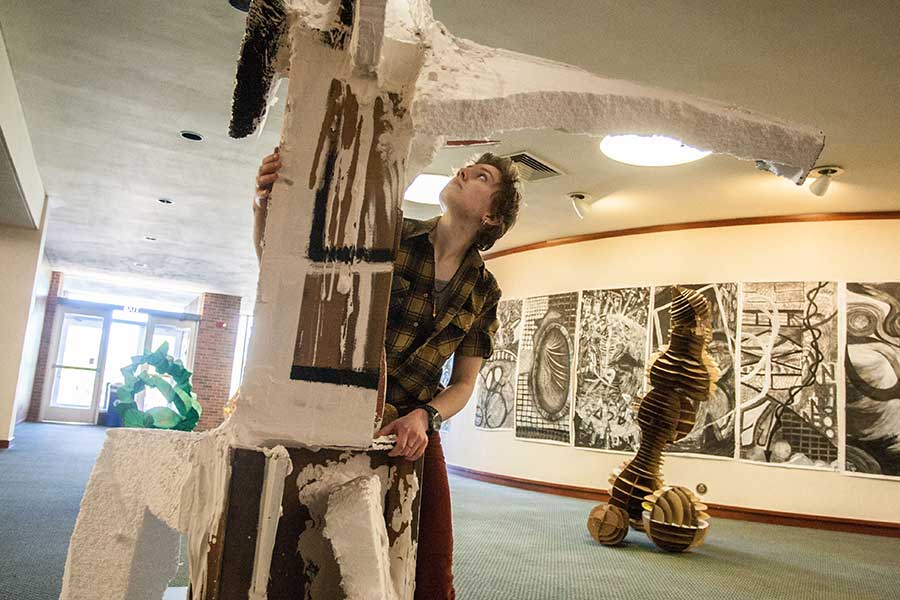 The 2016 Al Young Exhibit, the only juried art show at Knox College, featured over 200 pieces of art that surrounded the gallery and lobby of Ford Center for the Fine Arts.

The juror of this year's show, Todd Chilton, presented awards at a ceremony on May 6.

Chilton earned an M.F.A. from the School of the Art Institute of Chicago in 2005. He shared with Knox students his most recent work which is displayed all over the country, along with a few pieces from his time as an undergraduate at Brigham Young University.

"I wanted to show the art students at Knox my work as an undergraduate to show them that they will be constantly improving, and there will be pieces from their past that they will always be proud of. And for the ones that they won't [be proud of]—they can learn from those, too," said Chilton.

Chilton currently lives and works in Chicago, Illinois, and his art has been included in several solo and group exhibitions.

The show awards more than $3,000 in prizes to artists in 12 categories. Each winner receives $250, with the exception of the Al Young Purchase Award. This award, which adds one exceptional work to the Knox collection, earns the artist $500. It is called the "purchase" award because the juror of the Al Young show and the art professors select a piece to purchase. Kaylie Stahl ‘17, a studio art major, received this year's Al Young Purchase award.

"I think the most meaningful part of receiving the purchase award is knowing that the Art Department supports my work," said Stahl. "It's exciting to sell any art piece, but it's another thing to have the people who have been mentoring and educating me for the past few years buy one."

The Al Young Art Exhibition is named after a 1969 Knox graduate and long-time teacher in Belleville, Illinois, who died in 1993. Young began making gifts toward art prizes in 1968, while still a student. Since 1993, prizes have been supported by gifts from Young's sister, Ann A. Young '68. Several of the awards are named in honor of their parents, Albert G. Young and Anna Elisabeth Young. Additional awards are made possible by Beverly Bender '40 and Blick Art Materials. For 47 years, the Young family has continued support of this exhibit.

Emma Lister ‘17, a studio art major with a minor in theatre tech and design, has won the Beverly Bender Sculpture Award for two consecutive years.

"It had been a while since I've done something big and new, that I felt like (it) showcased what I had learned recently—the developments that I had made this year. I wanted to do that for this show," said Lister.

Lister has participated in the show every year since attending Knox and says that it's helped her continue to thrive as an artist.

"One of the things about the Al Young show is that some of the prizes, like the cash prize or the gift certificates to Blick, give you an incentive to push for what you want to do," said Lister. "You feel like you're being encouraged to be an artist. I think it's really good for students because it's a demonstration that people respect you and your work."

Stahl agreed, advising future students who are interested in the Art Department to "be self-motivated and make work that excites you. Opportunities like Richter grants, studio spaces, and the community of artists around you—-both professors and students—are invaluable," reflected Stahl. "If you're excited about the work you're making and dedicated to it, you should find spending time within the Art Department and participating in the Al Young Exhibit fulfilling."

There will be even greater opportunities for students studying art and art history with the construction of the new Whitcomb Art Building, which is expected to open sometime during the 2016-17 academic year.

"The Art Department at Knox is amazing because you're given so much room to work. I really like the Al Young show because I love the way that the Round Room fills up over the course of two days. It's completely empty and then, all of a sudden, every possible style of art you could ever imagine appears," said Lister. "I'm only going to be here for four years and I don't have a greater perspective, but I feel like the work that is coming out of the artists at this school has overall been growing and improving. It's amazing to see."

Here is a list of the Al Young winners: 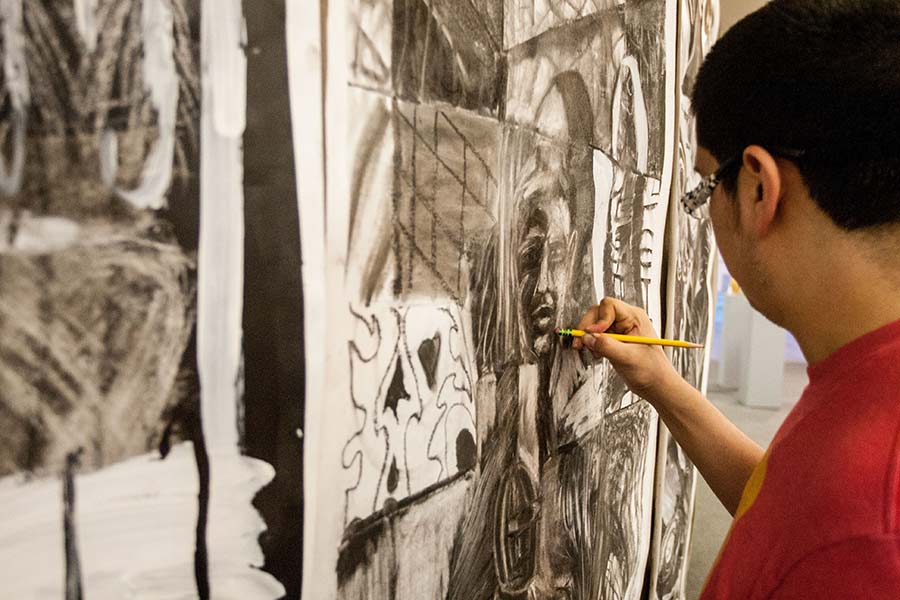 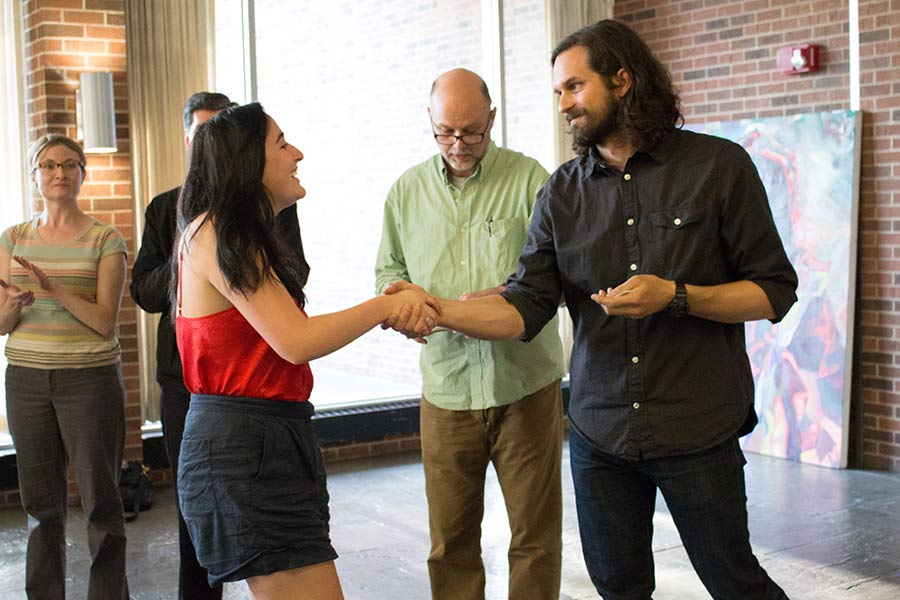 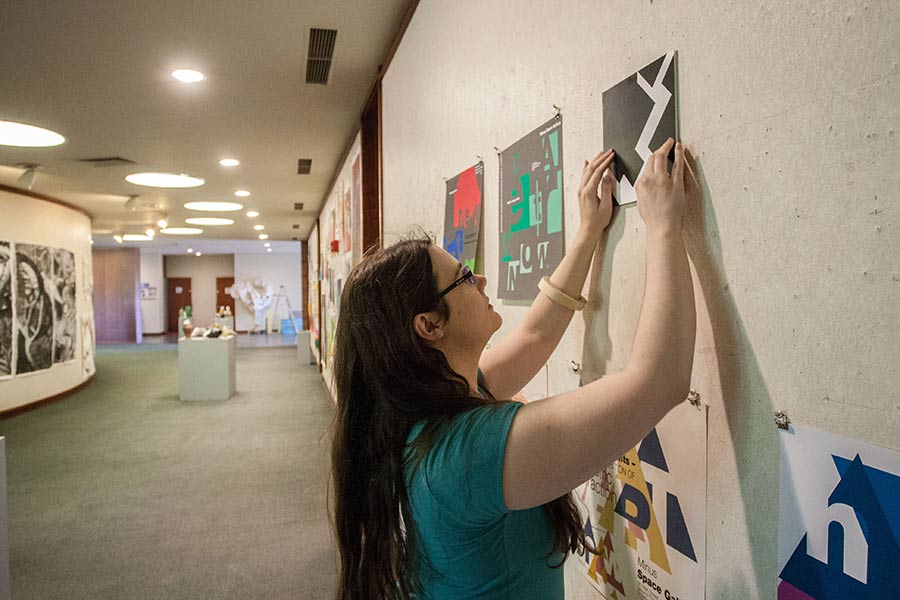 We're #KnoxProud to announce that senior Jarrelyn McCall has made #KnoxHistory by breaking Knox College Women...

Employees of P.J. Hoerr, Inc. prepare staircases and railings for the new observatories on the roof atop the Umbeck...