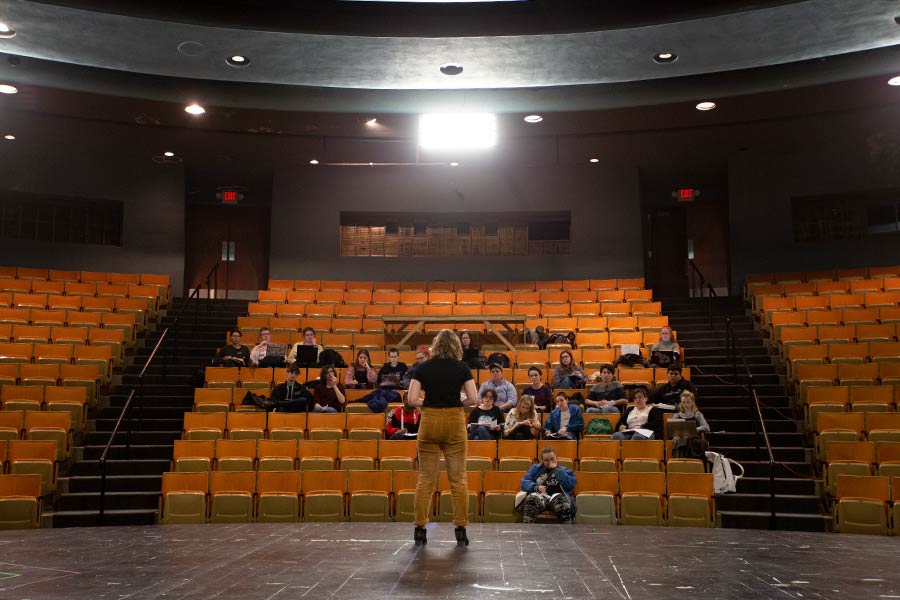 First-year Shubhanga Satyal came at Knox with acting experience and hoped that he would have the opportunity to direct some time during his four years at Knox. "I didn't expect to get to do it right away," says Satyal, but when he heard about an opportunity to direct a studio production, he jumped at the chance.

Directing his first production was hard work but, "that was the highlight," he says of his first term on campus.

The Knox Theatre Department offers many openings for students—whether studying theatre or another subject area—to be involved in the production of shows, events, and specialty workshops all four years on campus. Students also serve on the Theatre Advisory Board (TAB), which oversees student theatre at Knox.

Nelson adds that his experience on TAB will be an excellent resume builder because, “as with all jobs in theatre, it teaches you a lot of transferable skills. That experience of being accountable to a major task such as a theatrical production, along with only other people who are your peers, is invaluable.”

Nelson explains that anyone can get involved just by coming to auditions. “There are faculty-directed auditions and student-run auditions. Or [students] come to work calls and get experience building sets, hanging lights, or what have you." Nelson says that at the start of every year there is a theatre open house where students learn how to get involved and are introduced to everyone in the department.

Additionally, events like the New Plays Workshop give emerging playwrights the opportunity to have their works read, critiqued, and performed by members of the community. “As the rehearsal process continues, the playwright can keep redrafting their script and have the actors work on newer drafts. This helps the playwrights work through any problems they may have with plot development or certain scenes,” according to New Plays coordinator Joel Willison '20.

For Willison, the workshop is an integral part of creating new works at Knox by helping provide an area where Knox students can work through their ideas and gain more confidence in their writing ability. "I believe that New Plays Workshop helps create a more diverse range of plays presented at Knox and keeps the conversation in theatre at Knox new and interesting.”

Pictured above: A student reads a monologue during the auditions for winter term student-directed productions. 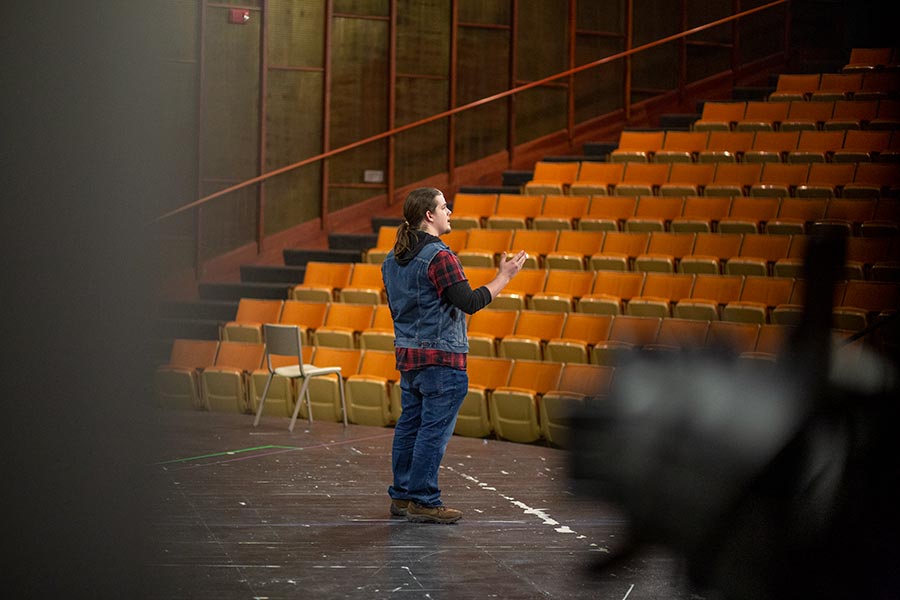 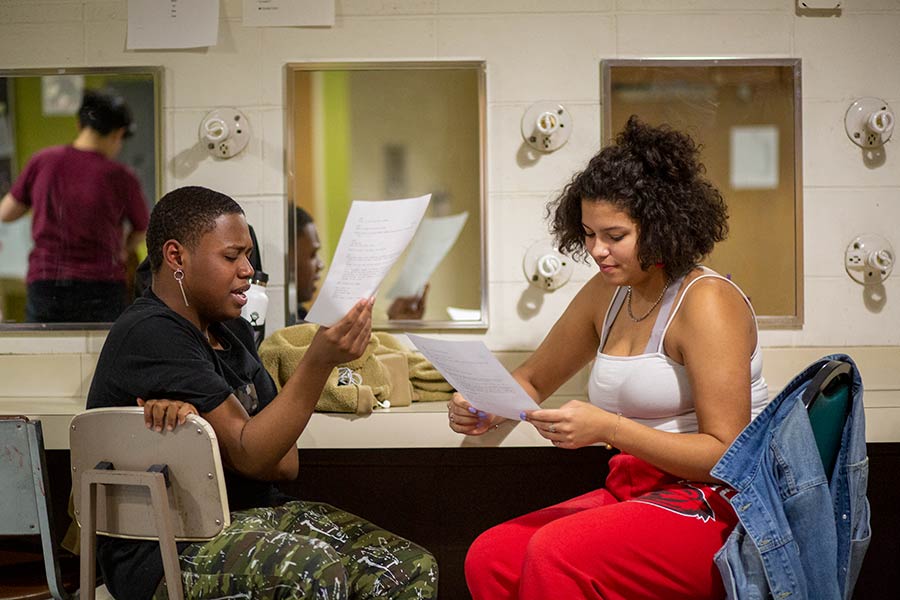 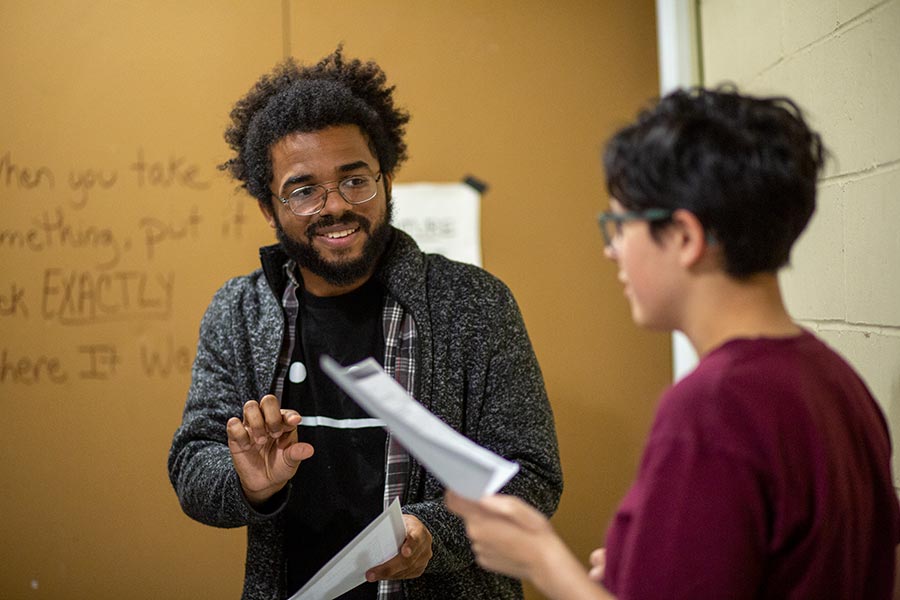 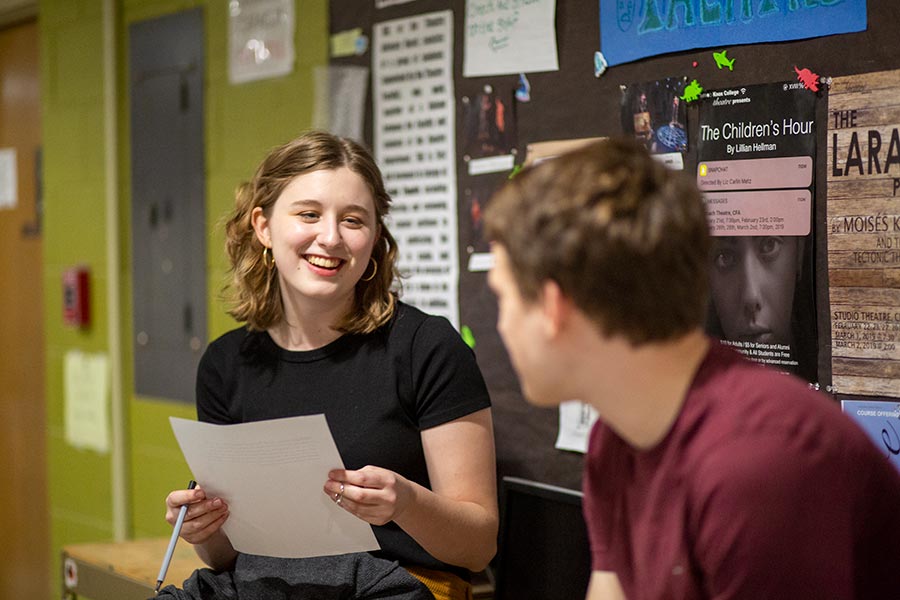 Listed below is the schedule for the 2020 Winter Studio Theatre season:

Moments before birth, two fetuses have a heart-to-heart about family, their future, and original sin. The world is a scary place. Are the twins actually ready to be born into it?

All On Her Own by Terrence Rattigan

All on Her Own by Terrence Rattigan is a one-woman show following the struggle of the newly widowed Rosemary. She returns to her empty house determined to figure out the cause of her husband’s death. Was it an accident like the police report said? Or did her husband take his own life?

The Deer Blind by Phoebe Billups

A grandfather, father, and his 10-year-old son go to the forest to bag the boy’s first deer. It’s a family tradition, as the grandfather’s recently deceased wife was an avid hunter herself. There, each of them learns more about what it means to be a man and part of a family.

Every year, a married couple observes their tradition of going into the city to do their Christmas shopping. This year, however, She learns that He has been unfaithful. He wants to deal with the matter privately, but She gives him a public scene that will be remembered for years to come.

A successful writer goes to his cabin to write about and confront his past regarding his mother's death. While looking through her journals, he realizes something that changes his life.