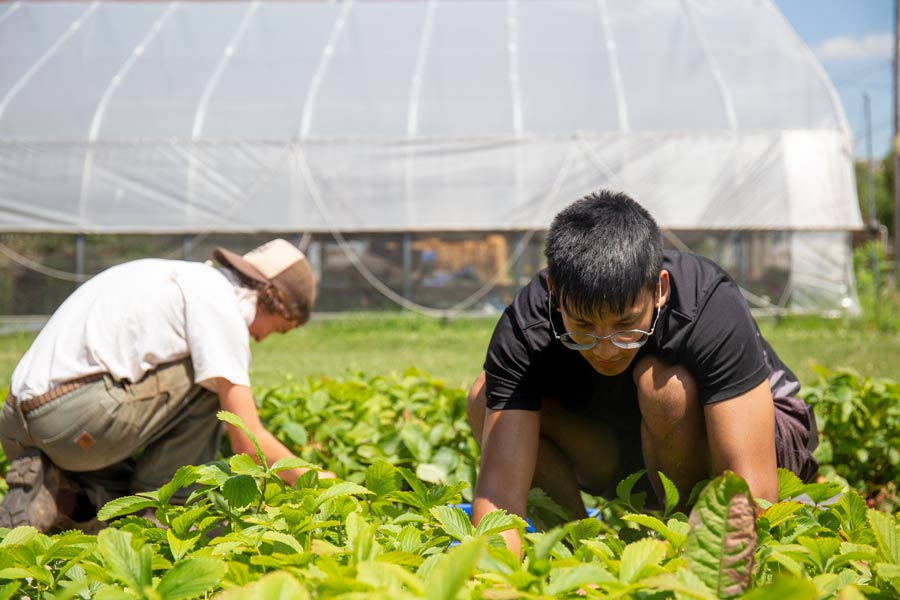 On a drizzling June morning, Knox Farm manager Tina Hope gathered her student workers at the entrance of the greenhouse in preparation for another day of work. She spoke loudly in order to overcome the sound of raindrops against the roof of the production high tunnel, as well as the social distancing measures her team abides by. The rain wasn’t a part of her plan for today’s beet harvest, but improvisation is nothing new on the farm.

“Make sure you’re really harvesting close to the stem,” Hope said. “We’ll just deal with the rain as we go. We might just stick the beets out there and let the rain clean them. That might be the first round, and we’ll see how that goes. Does that sound good?” Hope and the other workers briefly conferred on this plan, then they all went to work.

Isaac Hughes '21, one of the five Knox Farm summer student workers, discussed the importance of being adaptable when it comes to farm work. “There’s always a different adventure that we have every day,” Hughes said. “I love it when the great Midwestern weather does exciting things. Thunder comes in and we have to change our plans.”

Hughes discussed having a good team dynamic in tackling such unforeseen challenges. “Tina Hope is the farm manager, but she stresses that it’s a collaborative experience with the students,” Hughes said. “We try to make sure that everyone has equal footing because we want to make sure that it’s still a student-run farm; that’s the ultimate goal.”

Despite the small size of the operation, the Knox Farm produces a substantial amount of produce served in the Gizmo and the Hard Knox Cafe (affectionately referred to by students as “the caf”). “We produce a ton of greens for the caf, but also a ton of squash, a ton of peppers,” said Hughes. “Chef Joe talks with Tina to make sure that we’re growing the stuff he wants. Chef Joe is a very fun guy; he’s always experimenting with things.”

Hughes also highlighted student input in this production process. “Part of the farm is that we’re producing things for the caf, and that’s the business side. But it’s still this educational setting. If we want to experiment with something, then we’ll do it.”

Experimentation, it seems, is always present at the Knox Farm. Recently, the farm staff began growing ginger, a crop not typically produced in the continental United States. The project is part of a study through the Illinois Extension Office, which provided interested parties with seed ginger in an effort to retain a localized source of the crop.

“Knox was happy to support that project; all they have to do is plant the seeds and see what happens,” Hope said. “We’re reporting our methods, and we’ll compare with what other growers are doing. We’ll weigh it all at the end to see how well it does. Next year, we’ll replant it and begin to have a localized seed source of ginger and the actual root ginger that people can eat.”

Another project, which the farm began in 2019, is the Knox Food Forest: an orchard of fruit trees and additional crops grouped together.

“It’s this idea that if you grow apple trees and other fruit trees, you can grow these other plants around them in these guilds,” Hughes said. “When you guild these plants, they’re naturally pesticide-resistant, water-retentive. It’s a functional, perennial agricultural system. It was a lot of work to get there, but we’re realizing it’s going to be a lot of work to sustain it and get it to a point where it is self-sustaining.”

In taking on these endeavors, as with everything on the farm, Hope and the student workers emphasized localized production through sustainable practices.

“We can have a lot of super-local food in our caf, and we can have people appreciate that,” Hughes said. “The other side is having people see the farm, visit the farm, volunteer at the farm, and get a deeper relationship with the food that they eat. Being appreciative of where your food comes from, and if you’re lucky, participating in where it comes from, that’s really the first building block to developing a group of people that are ready to understand sustainability, and are excited to practice it.”

Photo at top of the page: Students working at the Knox Farm

"Make sure you’re really harvesting close to the stem. We’ll just deal with the rain as we go." —Knox Farm manager Tina Hope