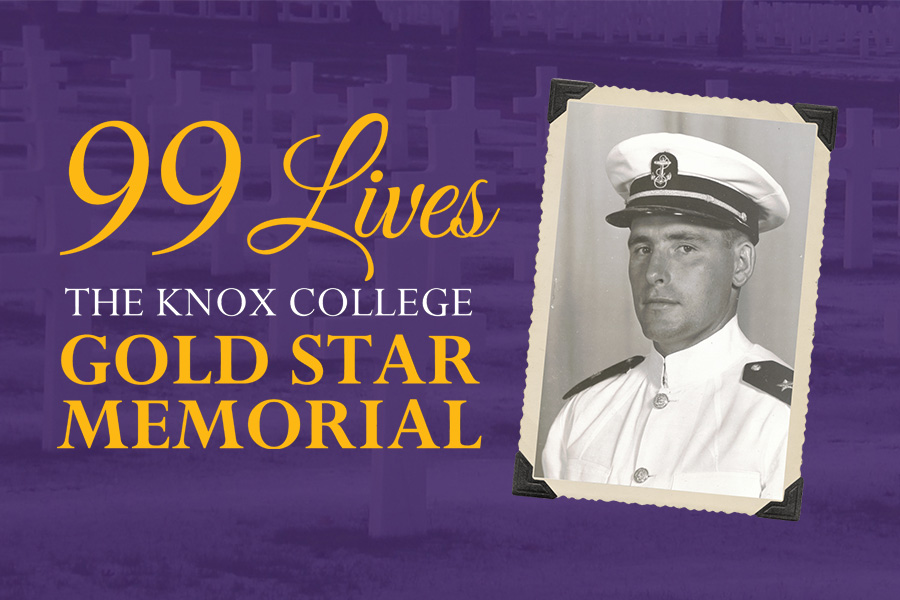 Knox College is honoring members of the college community who gave their lives serving in the nation's armed forces in the wars and conflicts of the 20th century, with a new high-tech memorial.

The "99 Lives Gold Star Memorial" features a new interactive display on the Knox campus in Galesburg, supported by an online database with details about the students, alumni and faculty who died serving in World Wars I and II, Korea and Vietnam. The database is accessible at https://www.knox.edu/99lives.

The dedication ceremony is free and open to the public, at 11 a.m., Friday, May 13, in Kresge Hall, Ford Center for the Fine Arts. The ceremony is part of Knox's Spring 2022 Homecoming.

The new memorial includes a kiosk with digital display and search capabilities, located in the lobby of Knox's Memorial Gymnasium, which itself was named in memory of Knox alumni who died in military service during World Wars I and II. The memorial culminates more than six years of historical research and development by Knox College staff and students, along with several alumni volunteers, spearheaded by a 1957 Knox graduate, Jamie Bjorkman of Galesburg.

"One of my goals is to show what this small college contributed to our country," Bjorkman said. "People may not know what the Knox College community contributed to these wars, what these families sacrificed."

Starting in 2016, Bjorkman began working with staff and students in the Knox College Special Collections and Archives. They created a temporary exhibit, with photos and short biographies of 99 veterans, that was on display in 2018.

Bjorkman, who's retired from working in the healthcare field, also searched across the country and around the world, visiting some 39 cemeteries and memorials to gather information about the veterans.

Subsequent research by a 1972 Knox graduate, Wendy Scherwat Ducourneau, has added several names to the database, bringing the current total to 102 - 18 from World War I, 65 from World War II, nine from Korea and ten from Vietnam. A retired management consultant, Scherwat Ducourneau spent over three years expanding and updating the veterans' biographies, by researching military records, genealogy websites, fraternity records, and high school and college yearbooks.

One of the veterans added to the memorial was an alumnus of Lombard College in Galesburg, Carl Rosequist, who died in World War I. After Lombard closed in 1930, the school's alumni records have been maintained by Knox.

Additional names will be added as research continues, but the title of the memorial will stay the same. "We decided to keep '99 Lives' to identify the memorial, because that was the initial inspiration for all the work that Jamie set in motion and has kept everybody focused on," said Anne Thomason, Director of Knox College's Seymour Library and chair of the informal working group that developed the new memorial.

The inclusion of "Gold Star" in the title of the new memorial acknowledges a nationwide program that started in World War I and continued during World War II. Cloth banners with blue stars were given to families who had members serving in the military. Gold stars were issued, to be sewn on top of the blue stars, when a family member died in the war.

Half of the veterans in the memorial, 52 of the 101, came to Knox from towns and cities in west-central Illinois. 22 of them listed Galesburg as their home town when they enrolled in Knox.

A frequent visitor to Knox's Memorial Gymnasium, both as a sports fan and for informal noon-hour basketball games with Knox faculty, Bjorkman says he often noticed a small display in the lobby, created when the gym opened in 1951, with photos of the Knox veterans who died in World Wars I and II, and later updated with names and photos of Korean and Vietnam war casualties.

The display eventually inspired Bjorkman, who remembers the exact day he decided to embark on the project. "It was February 25 of 2016. I was in the gym, and I noticed the display of names. I asked myself, 'Who were these guys?' The next thing I knew, I was at the Knox Archives in Seymour Library. One of the staff there, MaryJo McAndrew, was already working with materials from World War I. That's what got me started, to find out in depth about these veterans."

Always on the lookout for detail, Bjorkman points out a coincidence, that the date chosen for the new memorial's dedication ceremony, May 13, 2022, happens to be "the same date, 71 years ago to the day, May 13, 1951, that Memorial Gymnasium was dedicated to the Knox veterans who died in World War II."

A separate exhibit was developed by Pawlicki, "Knox College Experiences the First World War," and is still available online through the college library website, https://knoxcollege.omeka.net/ exhibits/show/knoxcollegewwi. Working with Laurie Sauer, Associate Librarian for Digital Initiatives and Collections, Pawlicki digitized more than 400 letters, documents and photographs from Knox men on their experiences as soldiers in training and combat, and from Knox women who served in a wide range of war relief efforts, both in the U.S. and overseas.

Also on the Knox campus, a memorial plaque at base of the flagpole in front of the College's Old Main, lists the students, alumni and one faculty member -- coach and physical education instructor Curtis Redden -- who died serving in World War I.

Prior to the 20th century, a total of ten Knox College students and alumni served in the Spanish-American War of 1898, in a unit from Illinois that also included famed poet Carl Sandburg, a Galesburg native and Lombard College alumnus. An estimated 170 Knox students and alumni served in the Union Army during the Civil War, 1861-65. That represented more than one-third of all the men who enrolled at Knox between the war and the college's founding in 1837.

Other cities and towns in area: