7 Things You Might Not Know About the Turkey Bowl 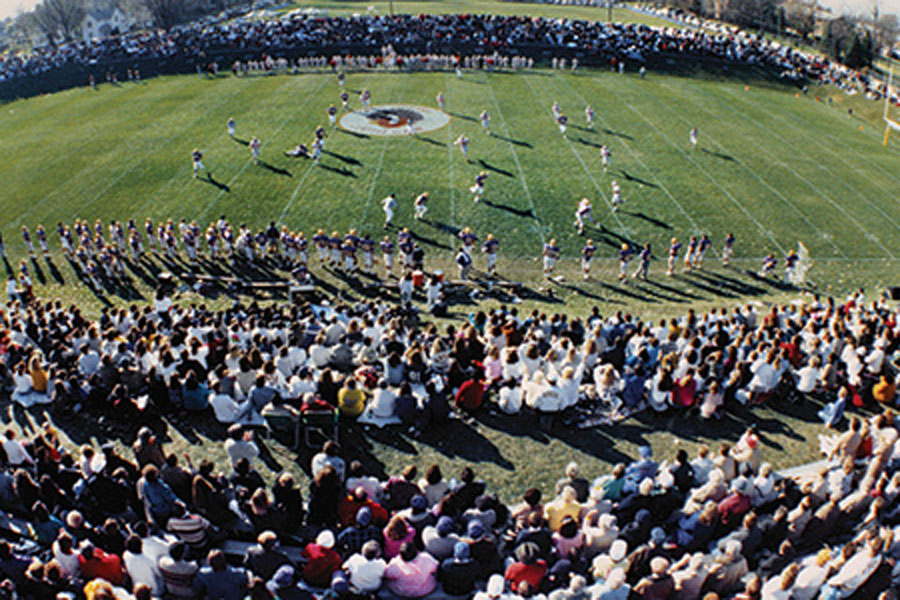 Named one of the strangest rivalry trophies by ESPN, the Bronze Turkey is a frequent item of curiosity for national news outlets like USA Today and the Chicago Tribune. The Bronze Turkey Bowl has pitted Knox College against Monmouth College for generations. This year's game -- at 1 p.m. Saturday, November 16 in the Knosher Bowl -- marks the 125th anniversary of the Turkey Bowl. To celebrate, here are a few things you might not know about this tradition.

1. The date of the original Turkey Bowl is disputed.

We know that the Turkey Bowl wasn't given its name until 1928 when the trophy was suggested by Knox player Bill Collins '29, but exactly when Knox and Monmouth started facing off isn't agreed upon. The first recorded score was in 1891, with Knox winning 22-4, and this is widely cited as the beginning of the rivalry. However, an old issue of The Knox Student has a dramatic report of an 1888 match where Monmouth players appeared at Knox and challenged them to a game without warning. The game ended in a victory for Knox. (Photo at top: A capacity crowd of about 6,000 watches the 100th Bronze Turkey game hosted by Knox on November 4, 1989.) 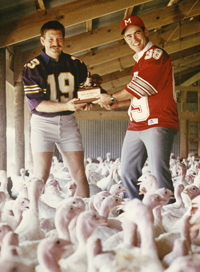 In October 1963, students locked faculty, staff, and fellow students out of Old Main on the Monday following a victory. A dump truck with two flat tires was parked on the South Lawn of Old Main and steel girders blocked the east and west doors. (Photo: Rival coaches in the 1980s, Randy Oberembt (left) of Knox  and Kelly Kane of Monmouth visited a local turkey farm one year to stage a publicity photo with the Bronze Turkey trophy.)

3. Pranking between the Colleges was so serious that it had to be outlawed.

In 1946, following a Monmouth raid on the Knox campus that toppled Knox goal posts and culminated in a brawl on the field, Knox and Monmouth student councils had a joint meeting to outlaw pranking. Even so, in 1955, Monmouth students returned to Knox but mistook the Knox County Courthouse lawn as Knox property and set it aflame while attempting to burn an "M" in the grass. A series of Turkey trophy thefts in later years also defied this rule.

4. The original Bronze Turkey is no longer awarded and is housed in an undisclosed location.

The original bird was discovered in a Chicago warehouse by Adolph Steinfeldt, an engraver and jeweler in Galesburg, and father of John Gary Steinfeldt '58. A duplicate Turkey was made after a long disappearance in 1984. A candle of a turkey was bronzed and turned into a replacement for the missing bird. The original reappeared in 1993 at a homecoming reunion party for the Monmouth Class of 1983. A man in a Monmouth College sweatshirt delivered it, with a ransom note, in a large box wrapped in a paper sack. The original Bronze Turkey was put into hiding and the replacement, which is sturdier than the original, is the trophy awarded today. 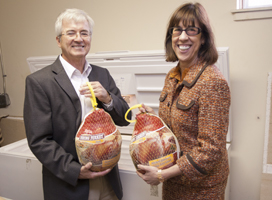 5. The Bronze Turkey has taken flight several times before.

During one bird heist in the 1940s, the Bronze Turkey had a wing broken off that was later welded back on. Around the same time, the bird was taken and later returned to a Monmouth College professor's porch missing its base. In the 1950s, the bird went missing for five years until the Monmouth College president received an anonymous note that instructed a certain portion of the indoor track be dug up. Underneath the track, tarnished but intact, was the Turkey. (Photo above: Monmouth College President Mauri Ditzler and Knox College President Teresa Amott deliver frozen turkeys to a food bank.)

As a senior defensive back, Eisele won the Tom Dean Award for the 1989 Bronze Turkey Bowl. The award goes to the game's most valuable player. "It was my last game, and I was voted by teammates as player of the game and it was the 100th game, so it was certainly a pretty special game to me," Eisele said. He also recalled that 6,000 people attended that year's game. It was even rumored that President George H.W. Bush would attend, but he didn't show.

7. The Knox and Monmouth presidents make an official bet with each other every year.

This wager is more philanthropic than most. From 2002 through 2010, Knox and Monmouth agreed that the president of the school that lost the game would donate 10 frozen turkeys to the other community's food bank. From 2011 to the present, both presidents have agreed to donate turkeys to both food banks -- with the number of turkeys depending on how many total points were scored in that year's Turkey Bowl. In 2011, for instance, the food banks received 84 turkeys, with each president donating 42. In Galesburg, the turkeys go to FISH Food Bank, and in Monmouth, the turkeys go to the Jamieson Community Center. (Photo below: Knox students barricade the doors of Old Main in October 1963 in an attempt to cancel classes in honor of a Turkey Bowl victory.)