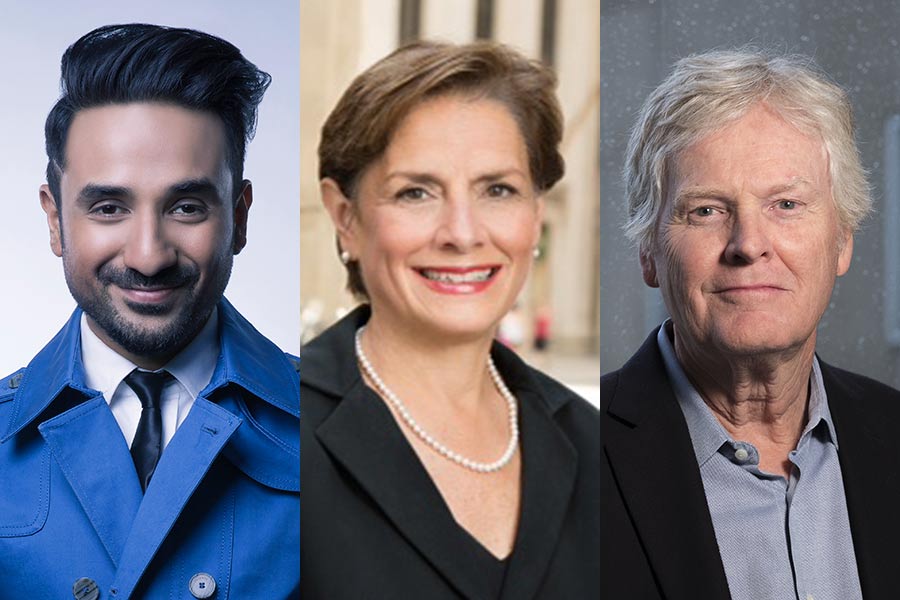 About the 2018 Honorary Degree recipients:

Vir Das has established himself as the biggest English-speaking comedian in India, as well as one of the country's top actors, writers, musicians, and festival producers. Thanks to his Netflix comedy special, Vir Das: Abroad Understanding, and a recently announced Hulu comedy series, Das is poised to break into the American entertainment world with his unique brand of humor.

Featured in The New York Times in 2011 as a one of a new set of emerging comedians in India, Das is known for bringing an American style to topics rooted in contemporary Indian culture. Over the course of his career, he has sold more than a million tickets as a stand-up comedian, touring internationally with Unbelievablish, the largest domestic comedy tour ever by an Indian comedian; The History of India; and Battle of the Sexes. In the last year, Das has traversed the globe, performing stand up in 35 cities on five continents.

Das has also climbed the ranks of the Bollywood elite in various films, including BadMaash Company; Delhi Belly; Go, Goa, Gone; and Revolver Rani, gaining a reputation as a leading man with impeccable comedic chops. In addition to stand-up and acting, Das leads his own multimedia consulting and production company, Weirdass Comedy.

After completing schooling in both India and Africa, Das attended college in the United States, graduating from Knox College in 2002 with a degree in theatre and economics. He also studied acting at the Stanislavsky School at Harvard University before returning to his home country to pursue his career in comedy.

Mary Meg McCarthy is the executive director of the National Immigrant Justice Center (NIJC), one of the nation's preeminent immigrant and human rights advocacy organizations. Under McCarthy's leadership, NIJC has implemented a unique approach integrating advocacy, impact litigation, direct service, and public education to make NIJC one of the nation's leading human rights organizations. NIJC's contributions to national and international analysis, debate regarding reform of immigration law, policy, and practices is well-known throughout the advocacy world and beyond. Over the course of her 20-year career, Ms. McCarthy has grown NIJC from a $1 million to a $7 million organization with nearly 90 legal professionals and a network of 1,500 pro bono attorneys, who are essential to providing legal counsel to approximately 10,000 low-income immigrants, refugees, and asylum seekers each year.

A nationally and internationally recognized immigration law expert, McCarthy has testified before Congress and at the United Nations and is frequently quoted in major news outlets, including MSNBC, The New York Times, and the Chicago Tribune. An active member of the American Bar Association, McCarthy chairs its Commission on Immigration. She is a member of The Chicago Network, the American Immigration Lawyers Association, and the Chicago Bar Association. McCarthy presented at the Strategic Litigation for Change Conference in Belfast and, in 2017, delivered the commencement address at Loyola University of Chicago School of Law. She currently serves as a trustee for the Catholic Theological Union, Chicago.

Earlier in her career, McCarthy worked in communities throughout Chile to help safeguard the rights of individuals under a dictatorship. She received her bachelor of business administration in finance from the University of Notre Dame and her doctor of law from Loyola University Chicago School of Law. She has been honored with several awards, including the American Constitution Society Chicago Lawyer Chapter Ruth Goldman Award, the Elmer Gertz Award for Human Rights from the Illinois State Bar Association, the Chicago Inn of Court 2015 Don Hubert Public Service Award, the Pax Christi 2013 Teacher of Peace Award, and the Damen Award from Loyola University.

Michael W. Young, Richard and Jeanne Fisher Professor and vice president for academic affairs at The Rockefeller University, is an American geneticist and one of the world's leading experts on circadian rhythm, the 24-hour period of biological activity in humans and other organisms. He, along with fellow geneticists Jeffrey C. Hall and Michael Rosbash, was awarded a 2017 Nobel Prize in Physiology or Medicine for discovering the molecular mechanisms that regulate the circadian rhythm.

Young's research is built upon more than three decades of work in his lab studying circadian clocks, and his findings have implications for sleep and mood disorders, as well as dysfunctions related to a variety of metabolic diseases. He began his research with the Drosophila melanogaster—or the common fruit fly—identifying a small group of genes that can affect the duration of circadian rhythms. Today, his lab studies the actions of these genes in a variety of biological models, with a particular focus on how the circadian clock affects sleep.

Young attended the University of Texas at Austin for undergraduate and graduate studies, receiving a bachelor's degree in biology and a doctorate in genetics. After completing postdoctoral studies at the Stanford University School of Medicine, he joined the faculty at The Rockefeller University. He has also served as an investigator for the Howard Hughes Medical Institute and head of the Rockefeller unit of the National Science Foundation Science and Technology Center for Biological Timing.

In addition to the Nobel Prize, Young has received numerous awards over the course of his career, including the Gruber Foundation Neuroscience Prize, the Louisa Gross Horwitz Prize from Columbia University, the Canada Gairdner International Award, and the Shaw Prize in Life Science and Medicine. He is an elected member of the National Academy of Sciences and a fellow at the American Academy of Microbiology.

The 2018 Knox College Commencement will be held on Sunday, June 3, at 10:00 a.m. on the South Lawn of Old Main on the Knox College campus. It is free and open to the public.