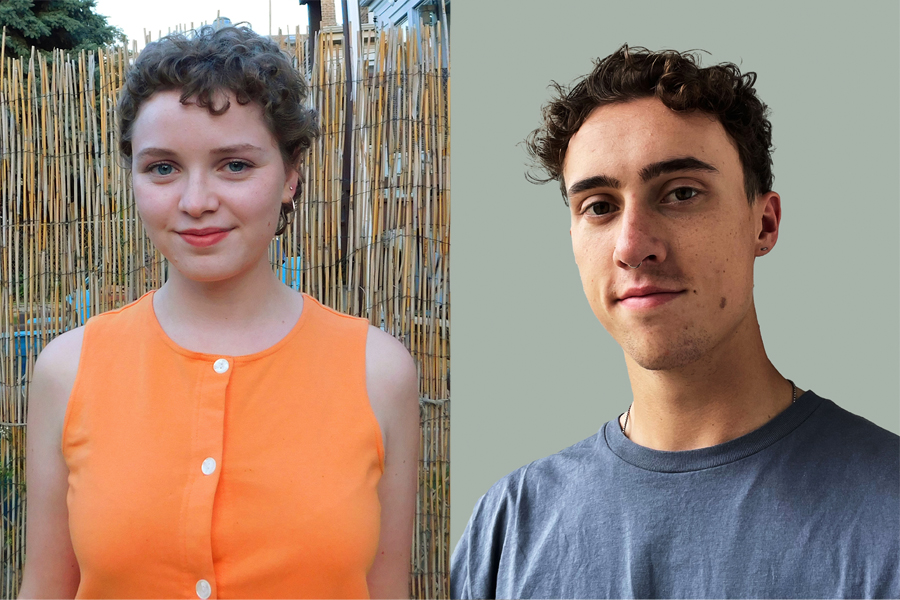 Knox College has once again been selected as the winning proposal for the 150 Media Stream/ACI Contest for Digital Art in Chicago. Knox College graduate Ingrid Wasmer ’21 and James Adamson '25 were notified of the acceptance after submitting their proposal earlier this year.

This is Knox College’s second time chosen as the winning proposal, following the work submitted by Odessa Sagli ’20 and Patrick Steppan ’20. Tim Stedman, assistant professor of art, worked as an advisor on both projects. Wasmer and Adamson say that they are thankful to have veterans of the Media Stream as peers for guidance.

“We will definitely be reaching out to them for feedback,” Wasmer said.

Wasmer and Adamson traveled alongside Stedman to Chicago in August to showcase a one-minute sample of their work from over the summer. The installation is a uniquely designed digital display, utilizing 89 separated LED blade panels. 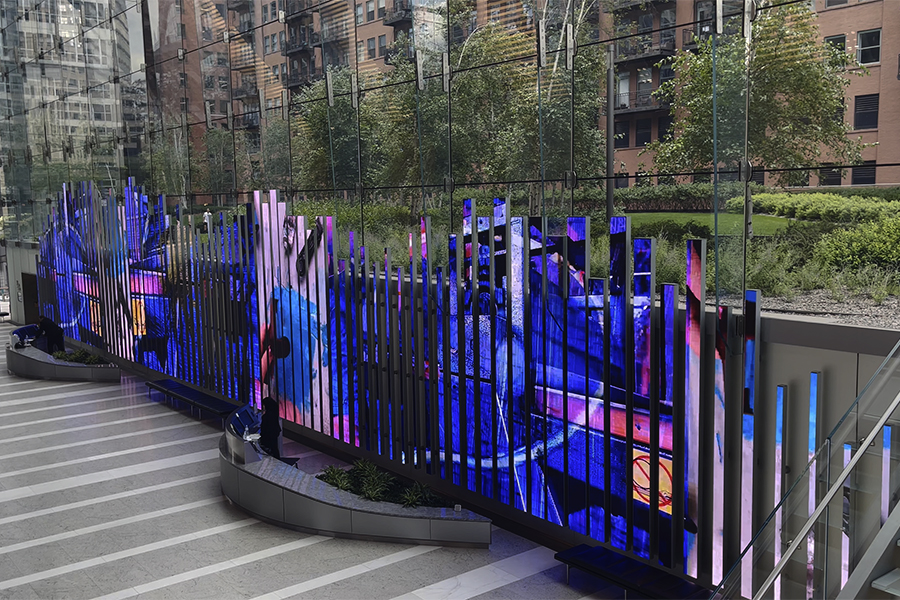 Located at 150 N. Riverside Plaza in Chicago in the lobby of a business center, the 150 Media Stream was founded in 2017 and is curated by Chicago artist Yuge Zhou.

Zhou says the project was started to create a bridge between the art community and the business community in Chicago. Because the installation plays on a loop in the lobby of a business center, Zhou hopes to create a space for the public consumption of art.

Since its inception, the project has showcased the work of more than 30 artists.

“We didn’t know if it would be an obstacle, a challenge, or just an opportunity. Our artists really ended up loving it,” Zhou said.

Working along with educational institutions is a big initiative for Zhou. Since Knox College was selected twice, Zhou says she joked with Stedman that perhaps the project should start working directly with the college.

Knox was selected out of a pool of over 25 applicants. Zhou says that she looks for work ethic and projects with personality for the installation. She says that in both projects, she has been pleasantly surprised by the levels of maturity and passion that Knox College students have shown.

“For a student at that age, it's nice to see such passion,” Zhou said. “I think it’s a testimony to the education at Knox.”

Wasmer and Adamson met weekly over the summer to develop their ideas. The project blends the digital animation skills of Adamson with the painted artwork of Wasmer.

“We talked about the feeling of transferring physical art to a digital medium,” Wasmer said. “We wanted to explore that visually.”

Wasmer and Adamson film each other working on various physical art pieces, highlighting the motion and process of each piece The current iteration of the project utilizes a number of visual methods, including large, sweeping movements across the installation, stop-motion animation, and more. Adamson says that the final production should be between 8 to 10 minutes total once completed.

“[Zhou] encouraged exploration,” Wasmer said. “We want it to pack a punch visually.”

Adamson says the project has lived up to the type of challenge he expects from a Knox education. He says that, while the process has had moments of feeling like a “trial by fire,” he is appreciative of the trust that Stedman has given to him and Wasmer to see it through.

“I’m sure this will be a highlight of my Knox career,” Adamson said.

Although she graduated before the proposal was accepted, Wasmer says this opportunity has been a rewarding start to her artistic career.

“It’s been overwhelming, but rewarding. It’s a real step into the art world,” Wasmer said.

The pair will continue work on the project over the course of the next few months with guidance from Stedman and Zhou. Once final edits are complete, Zhou says she wants to schedule a debut for May 2023. The piece will be available on display for two months.